Pierre-Yves Mocquais brings track record of success as an administrator, a collaborator and a fundraiser. 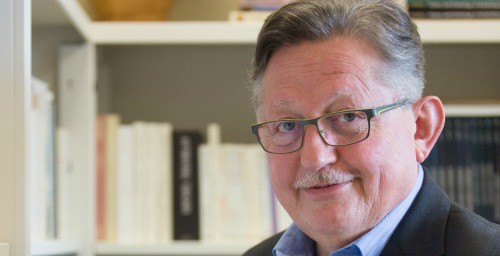 (Edmonton) The University of Alberta Board of Governors has appointed French professor and former dean of humanities at the University of Calgary, Pierre-Yves Mocquais, as dean of Campus Saint-Jean, effective July 1.

“The U of A is one of the top five universities in Canada, it is extremely active in research and is one that anyone would aspire to be a part of,” he said. “This opportunity here is one that I couldn’t pass up.”

In making the announcement, Carl Amrhein, university provost and vice-president (academic), said both Mocquais and university administration hold the belief that CSJ contributes uniquely to the identity of the university and the city of Edmonton.

While still working toward his PhD, Mocquais accepted a lectureship position at the University of Regina in 1978, where he grew to assistant professor to a full professor in 1995.

“What fascinated me about academia was this relationship with students, the idea of being able to allow young minds to develop and bloom.”

Along the way, Mocquais tried his hand as administrator, first as head of the Department of French (1992–97) and then as associate dean of arts (1997–99). He says his foray into administration started out as an obligation, but quickly turned into something he cherished.

“With my colleagues I have developed the same sort of relationship I have had with my students,” he said. “I realized I really enjoyed helping others to work and develop.”

In 1999, Mocquais was appointed dean of the Faculty of Humanities at the University of Calgary.  Among the projects he led was a $1.1-million application to the Canada Foundation for Innovation for the creation of a Language Research Centre, followed by an application for a Canada Research Chair in Applied Linguistics.

After the end of his term as dean, Mocquais resumed his teaching and research. He has spent the last 10 years teaching and focusing on his research into francophonie on the Prairies, and how memories of their forefathers who came from France or Quebec has helped build their identity—an endeavour that long connected him to the CSJ experience. “To be an active participant in CSJ’s development is something I find really exciting.”

Once he settles in, Mocquais wants to begin further reinforcing the already strong scholarly quality and output of CSJ and help the faculty become the undisputed leader in Western Canadian studies through national and international partnerships. “I want to further reinforce its capacity to educate and train young minds that are needed for the francophone community of Alberta and Western Canada, and for Canada as a whole.”

He is also intent on stabilizing CSJ’s financial situation by engaging in fundraising, a facet of the job Mocquais is quite experienced in. Besides his leadership in raising funds for the creation of the Language Research Centre, he also proposed the creation of a Chair in Business Ethics to be located in the Faculty of Humanities and raised $1 million towards its creation.

Underlying all his goals is a desire to collaborate closely with other academic units on campus, as well as the Franco-Albertan community and its leaders, various organizations and agencies, of which he considers CSJ to be an essential component.

“The collaboration with the francophone community is a paramount factor present in everything,” said Mocquais, whose engagement on behalf of francophonie and French culture has been recognized by the government of France, which appointed him a member of the Ordre des Palmes académiques in 2005 and an officer in 2013.

“What I feel is that, in the same way that a lot of the identity of Canada is related to the fact there is a French component in Canada, one of the identities of the U of A is the existence of this French faculty.”

Mocquais succeeds Ed Blackburn, who sat as interim dean of Campus Saint-Jean for 16 months after taking over for Marc Arnal, who served two terms as dean.