This drives home the fact that something significant happened 2.3 billion years ago—the permanent oxygenation of our planet.

Copper provides clues to the rise of oxygen on Earth. 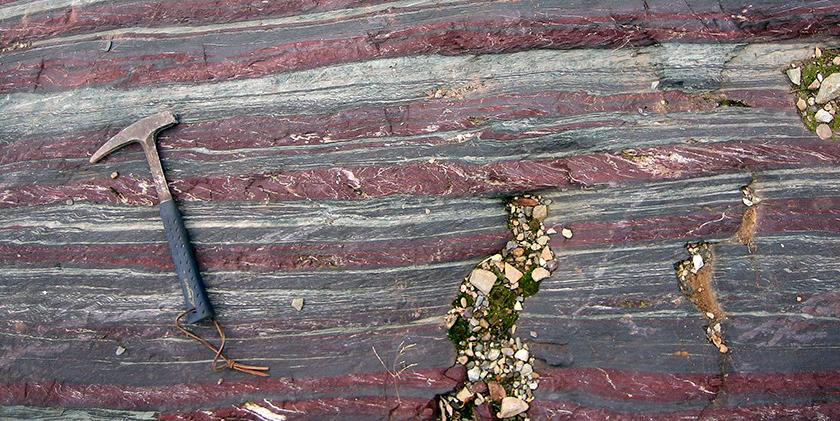 Banded iron formations, such as this one pictured in Western Australia, captured chemical features of ancient seawater when they formed in iron-rich oceans billions of years ago.

For the first time ever, copper isotopes have been used to track the oxygenation of ancient oceans. Scientists recently presented evidence that the rise of atmospheric oxygenation did indeed occur roughly 2.4 to 2.1 billion years ago. Their findings also show that biological usage of copper became prominent after the so-called “Great Oxidation Event.”

“This is the first time that copper isotopes have been used to track the chemical composition of Earth’s ancient origins when aerobic life was beginning to diversify,” says professor Kurt Konhauser of the Department of Earth and Atmospheric Sciences at the University of Alberta, the sole Canadian author on the publication. “This drives home the fact that something significant happened 2.3 billion years ago—the permanent oxygenation of our planet.”

The researchers made the discovery by examining ancient sedimentary rocks—namely banded ion formations and shale—deposited at the bottom of ancient oceans 2.66 to 2.1 billion years ago. The scientists examined the quantity of copper through time and discovered that the copper isotope signature changed roughly 2.3 billion years ago, leading to a fundamental change of more oxygen in the atmosphere. This shift then led to increased weathering of land and a larger supply of nutrients to the oceans, enabling marine life to diversify.

Konhauser stresses that the rocks studied cover one of the most important changes in Earth’s geological history, and if it weren’t for the rise of atmospheric oxygen, higher forms of life–including human beings—would not have evolved.

Interconnectivity of life on Earth

The new study reconstructs early marine settings and provides a tool for tracking not only how oxygen levels fluctuate throughout Earth’s history, but also the evolutionary changes that accompany these fluctuations. “The findings point to the complexity of Earth as an integrated system,” Konhauser notes. Geological processes select which biological species dominate any given habitat, and biology in turn controls the redox state of the environment. Everything is linked on Earth. Geology, the environment and life are all intertwined.”

The project was carried out by an international team of researchers from Sweden, England, France and Canada. Data from the U of A were coupled with analytical techniques at Stockholm University. These latest findings build on the U of A’s strength of studying’s oxygen’s evolution on Earth. “Cu isotopes in marine black shales record the Great Oxidation Event” appears in the April 18 issue of the Proceedings of the National Academy of Sciences.