Unlocking the clues to climate change

Part 1 of an in-depth look at northern research at the University of Alberta. 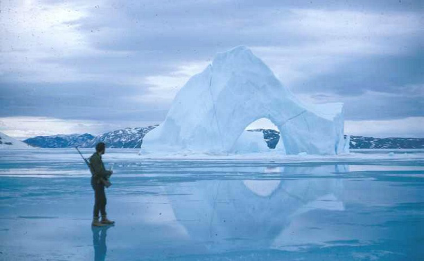 John England on the sea ice of Ekalugad Fiord as an undergraduate, doing his first independent research project in 1967 in what is now Nunavut 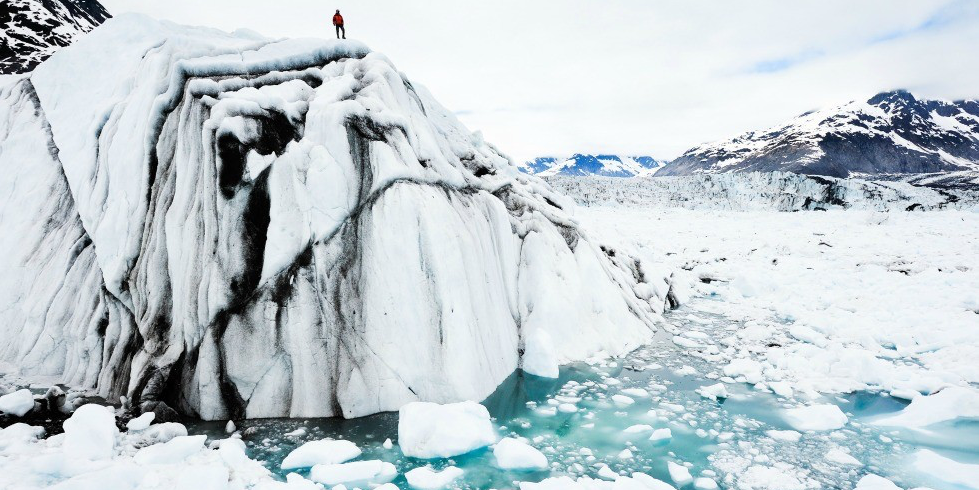 Arctic ice is at the core of Canadian identity, but the glaciers of the North may hold answers to challenges affecting the entire world. (Photo: James Balog)

The University of Alberta is one of the world’s northernmost research universities. From studying ancient ice that reveals clues about Earth’s changing climate, to looking at the impact of resource development on the North, to helping protect and preserve Aboriginal cultures and traditional knowledge, U of A researchers have spent decades getting to the bottom of what’s happening at the top of the world.

It envelops almost half our land and holds most of us in its grip for a good part of every year. We even carve the poetry of our national game on its surface. Intimacy with ice is part of what it means to be Canadian.

But trapped within the frozen bond of hydrogen and oxygen also lie answers to more global mysteries that unfold over millennia. Like encyclopedias of infinite scope, glaciers contain an invaluable record of the Earth’s recent geological and atmospheric history. And they may very well hold the key to understanding modern-day climate change.

One of the world's northernmost research universities, the U of A has long been home to prominent and wide-ranging research on the Canadian Arctic and circumpolar regions around the globe.

Because of the University of Alberta’s proximity to the North, glaciology—the science of glaciers—has been thriving at the university for more than 40 years, along with other investigations informed by it—those exploring plants capable of surviving an ice age, shrinking polar bear habitat and pollution found in rivers, to name only a few.

The U of A’s investigation of northern ice dates back to the 1960s, with Nat Rutter’s work on the glacial geology of the Canadian Rockies. But the credit for first exploring Arctic ice in depth goes to John England, whose pioneering work spans almost five decades.

England spent his illustrious career reconstructing North American ice cover during the last ice age. He was the first to identify the glacial phenomenon known as the ice shelf moraine—a thick, floating platform of ice that forms where a glacier or ice sheet flows down to a coastline and stretches out onto the ocean surface. Such shelves are found only in Canada, Greenland and Antarctica.

England officially retired from the U of A more than two years ago but continues his work in the field and is currently finishing up one of the biggest papers of his career, one that promises to shed direct light on the dynamics of climate change.

He has reconstructed the life of what he calls the “best geological example of former ice shelf on the planet,” a 60,000-square-kilometre sheet of ice that extended hundreds of kilometres into the ocean in the western Canadian Arctic Islands. From formation to collapse, the Viscount Melville Sound Ice Shelf lasted about 400 years at the end of the last ice age, but illustrates what could happen more quickly under conditions of global warming. Once a shelf like this breaks up, he says, melting of the interior ice to which it was once attached accelerates rapidly.

“It’s like lighting a fuse on a stick of dynamite,” says England. “Once it went, it took out something similar to today’s Western Ice Sheet in Antarctica.”

Modern glacier recession and its implications for climate change is a primary focus of Martin Sharp, also in the U of A’s Department of Earth and Atmospheric Sciences.

Sharp has discovered that microbial ecosystems living underneath glaciers could play a key role in accelerating global warming. The microbes feed on carbon and other minerals in rock, producing carbon dioxide and methane that get trapped under the ice—another ticking time bomb for ice melt.

“If you release carbon dioxide into the atmosphere at a time when the climate is already warming, you amplify the warming and you get more melt, accelerating the retreat of the glacier," says Sharp, whose findings also show that almost every glacier in the Yukon has been shrinking in the past few decades.

This animation shows how the relative amount of older and newer ice in the Arctic winter ice pack has changed from 1987 to late 2014. (Video: NOAA Climate.gov)

Retreating ice, in glaciers and on oceans, is already starting to change natural ecosystems. Habitat loss for polar bears in the Arctic, demonstrated by U of A biologist Andrew Derocher, is one of the most striking and best-known indicators of global warming’s advance.

Just last October, Derocher and his colleague, U of A adjunct professor Ian Stirling, were able to demonstrate that polar bears are getting smaller. Shrinking sea ice has meant polar bears spend less time hunting for seals, resulting in weight loss.

It is now widely known that the melting of all that Arctic ice contributes to the rise of global sea levels, putting millions of people in coastal areas at risk. But glaciers are also an important source of water supply for a large part of the world's population, and more water in the ocean means less in the world’s rivers.

“Most of the headwaters of the world's major rivers start in glaciers,” says Sharp, “and if we lose that ice source at the top of the system, there are going to be all sorts of implications for populations downstream."

It’s a reality that hit home for northern Albertans when U of A biologist David Schindler showed that the Saskatchewan Glacier, feeding the North Saskatchewan River running through Edmonton, has lost more than 25 per cent of its mass in the last century.

Beyond the question of climate change, however, glaciers also tell us a lot about how pollution circulates in the atmosphere. How is it possible, for example, that organic contaminants such as PCBs and DDT, some of which are long banned, continue to be found in fish in remote northern lakes far from any urban centre or industrial site?

It turns out some contaminants can travel huge distances on air currents, accumulating as snowfall on glaciers where they remain until the ice melts.

Research conducted 10 years ago at the U of A, again by Schindler, showed evidence of organochlorine contaminants in the Columbia Icefields’ Athabasca Glacier. Those pollutants ended up in fish downstream.

Harnessing a legacy of northern research

All of this multifaceted research in and around glaciers has been an impressive legacy for the U of A, underscoring the university’s potential to lead the world in northern science. But researchers also admit that co-ordinating programs and creating centres of critical mass have been less than successful.

“We have failed to create community here at the U of A when it comes to northern science, and that's true of my whole career,” says England. “Faculty have to take some responsibility—people have gone their own way, doing their own thing,” rather than looking for points of contact.

“The North is a heart-and-soul component of our country ... it's part of our core identity.” —John England

History and geography have given the U of A a special relationship with the North and its people. Some facet of northern research has been conducted at the university almost since its inception. Unfortunately, these studies were solo efforts tucked away in labs throughout the school’s campus, going largely unnoticed.

That changed with the formation of the Boreal Institute for Northern Studies in early 1960. The institute was a pioneer in multidisciplinary research, designed to foster collaboration in northern studies across all academic departments. Its successes included the groundbreaking land occupancy studies of anthropologist Milton Freeman, which was the basis for northern land claims and laid the groundwork for the creation of the territory of Nunavut.

In 1990, the Boreal Institute was renamed the Canadian Circumpolar Institute, in recognition of the increasingly international nature of its focus. In 2013, provincial budget cuts caused most of the institute’s funding to be eliminated, and though the university remains a leader in the area and is committed to ongoing excellence in northern and circumpolar research, it has been forced to reimagine the vision of the institute and scale back its activities.

That could change dramatically, however, with the U of A’s plan to adopt the Geological Survey of Canada’s extensive collection of ice-core samples now held in Ottawa.

Core identity: U of A poised to lead in ice research

“For the U of A, the ice-core assets represent a once-in-a-generation opportunity,” says Deputy Provost Roger Epp, who is leading a charge to reimagine the vision of the Canadian Circumpolar Institute and co-ordinate northern research initiatives through a new unit called University of Alberta North. “They solidify and focus our commitment to Arctic science as Canada’s northernmost research-intensive university.”

Stretching more than 1,000 metres end to end, the cylindrical shafts of ice date back more than 12,000 years and contain a wealth of information from locations in High Arctic glaciers and frozen mountaintops, including Canada’s highest peak, Mount Logan, as well as Ellesmere, Baffin and Devon islands. Many of them have yet to be analyzed.

Natural Resources Canada has already decided to transfer the collection to the U of A, which is currently sorting out details of delivery. If successful, the U of A will become home to a combination of expertise and world-class laboratory facilities unmatched anywhere in the country, with the capacity not only to analyze previously unexamined samples using new technology, but also to launch new research initiatives that add to the collection—and to the world’s understanding of the infinite mysteries trapped in ice.

England calls the collection “an exceedingly rich and diverse record of environmental change, which now offers the opportunity for all kinds of analytical studies, and which would attract people from around the world." He adds that the collection is a “wonderful component of reinvigorating northern science and its recognition at the U of A. It gives us substance—like gold bullion.

“The North is a heart-and-soul component of our country, so it’s appropriate the university fosters it. Northern science is not only worth promoting; it's part of our core identity.”

PART 2: Canada's North is open for business—or is it?