Unravelling the mystery of prions 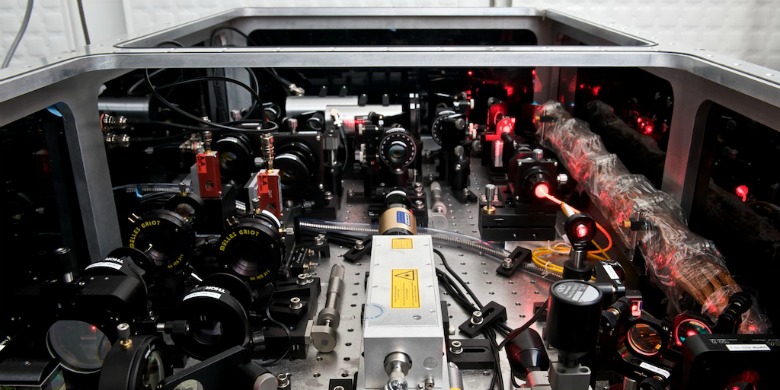 (Edmonton) Researchers at the University of Alberta's physics department and the National Institute for Nanotechnology (NINT) are the first to map out the folding pathways of prions, malformed proteins that lead to diseases such as Creutzfeldt-Jakob disease in humans and bovine spongiform encephalopathy (BSE, or "mad cow" disease) in cattle.

The team of researchers used specially designed optical tweezers to pull apart molecules of the prion protein PrP and map their motions with unprecedented precision.

"We are using tools from physics to help solve hard problems in biology," said Michael Woodside, a research officer at NINT who holds a cross-appointment as an assistant professor of physics at the U of A. "No one has ever directly mapped out the folding pathways that are available to the prion protein. By doing this, we get more detailed information about what are the likely states of the protein that should be targeted by therapeutics to prevent the disease."

Most strikingly, Woodside’s team found that the unfolded state of the prion may play a key role in the misfolding. "We don’t see evidence for the kind of partially folded, almost native intermediate states that have been postulated to lead to disease. Instead we find evidence for the importance of the unfolded state, which has been more neglected."

The optical tweezers used to pull on the protein molecules were developed by Woodside and his team to measure atomic-scale motions of the molecules in real time as they change structure. The apparatus is situated in the National Institute for Nanotechnology building on the UAlberta north campus.

Two physics students, three physics post-doctoral fellows and two NINT technicians, along with Woodside, worked on the experiment. The findings were recently published in Proceedings of the National Academy of Sciences USA. The lead authors were Hao Yu, a PhD candidate in physics, and Dr. Xia Liu, a post-doctoral fellow who is now a staff scientist at the Canadian Light Source.

Woodside is proud of his team, and he predicts the findings will lead to more investigations.

"This is the first study that has directly observed and characterized the formation of non-native (i.e., incorrect) structures in individual protein molecules that contain a single structural domain," he says. "Only a handful of studies have had sufficient spatial and temporal resolution to observe such effects, and they have not seen them."

Woodside adds, "There will be a lot to learn about what makes PrP special, with its unique and peculiar infectiousness, by comparing its folding to the folding of more ‘normal’ proteins when measured at the same level of precision."

Unravelling the mystery of prions