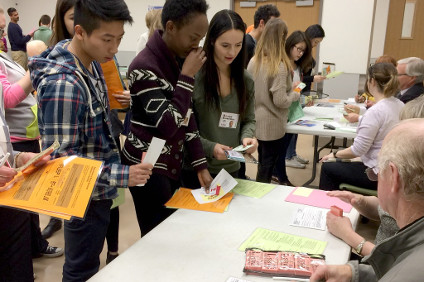 Up close and poor

Health science students get a taste of the daily desperation of living in poverty.

At the local pawnshop, a young mother barters some jewelry, desperate to feed the crying baby in her arms. Around the corner, a local drug dealer entices a hungry, homeless father of two to sell drugs for extra cash. Meanwhile, a woman rushes by, on her way to the police station, because she missed daycare pick-up and social services took her child away.

The desperate scenarios are all too real for the more than 350,000 Albertans living in poverty—nearly 10 per cent of the population. They were also viscerally real for the 130 University of Alberta health science students taking part in two poverty simulations Nov. 24 and 26.

“Many of our students come from quite privileged backgrounds. Giving them greater awareness of low-income families and people who are vulnerable is important to create empathy but also to form a team-based health care perspective,” said Sharla King, an education psychology professor and director of the Health Sciences Education and Research Commons (HSERC).

That team-based health care approach is not common in the Canadian health care system, according to Brian Goldman, an emergency physician at Toronto’s Mount Sinai Hospital and host of CBC’s radio show White Coat, Black Art.

When the U of A created HSERC in 1992, and its emphasis on imparting collaborative team-based education among health sciences, it broke new ground in Canadian health sciences education.

“To my knowledge, the University of Alberta is one of Canada’s most forward-thinking schools in this area,” added Goldman.

The poverty simulation, now in its second year, is one component of the required HSERC course, Essentials of Collaborative Practice.

The struggle is real

Students in the simulation soon find it hard to stretch their low income as they juggle bills, child care and health care.

As the students play out the roles assigned to them in the simulation and try to balance a budget, provide for a family, meet payments and take care of their health, circumstances go from bad to worse. Money runs out. Transit passes can’t be had. Parents lose jobs. Children go hungry.

Some students use creative strategies outside the game, like pleading for overtime from their employer or, after finding out they’ve been robbed, turning around and robbing a neighbour.

A debriefing at the end of the simulation explores the student experiences relating to people who face health-care struggles. The debriefing also pushes them to understand that a broad array of team members compose a truly collaborative health-care system, from social workers and nutritionists to police officers and nurses, said King.

“Health care isn’t just about who is down the hall in a clinic environment. It is about asking how poverty will limit this patient, and who I can connect him or her with to help.”

Research into developing the poverty simulation showed that some health science students are quite indifferent to the struggles poor people cope with, or simply assume they won’t engage with them in their future practice.

By the end of the simulation, students are also more self-aware.

“They are able to apply reflective practice to better understand how their own bias may impact their care,” said King. “It’s eye-opening for students when they realize some patients may not be able to get transportation to get to the pharmacy and get medicine, and that they need to consider how to pull in other members of the community to help.”

"I think it's critical for students of different health professions to learn and develop together,” Goldman said.

He added that teamwork and mutual respect are watchwords of modern health care.

“And yet there is widespread disrespect bordering on contempt for one another. A relatively tame example is the term ‘noctor,’ which is slang for a nurse who thinks he or she is a doctor. That sort of language flourishes in an environment in which various health professions grow and develop in silos.

“Put them together early on, and the hope is that mutual respect will develop, and slang will disappear."

Up close and poor