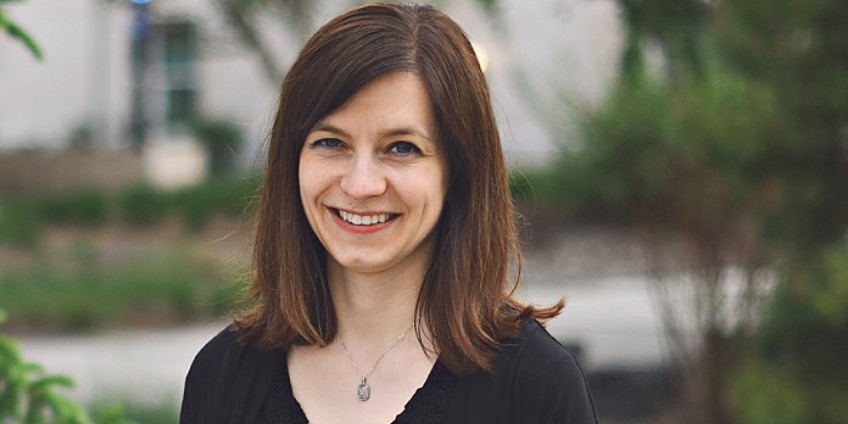 Registered psychologist Becky Ponting says impostor syndrome is a common feeling—especially among high achievers—and recognizing it can be the first step toward overcoming it, (Photo: Melissa Raimondi)

Ever felt like you don’t belong, like you faked it to get where you are or it’s only a matter of time before you’re unmasked as a fraud?

You may suffer from impostor syndrome, according to Becky Ponting, a registered psychologist with the University of Alberta’s Counselling and Clinical Services. She said research shows up to 70 per cent of people experience the syndrome at least once in their lifetime.

Each university term, Ponting runs a workshop for students on how to identify and overcome impostor syndrome. She said while it’s not a mental health disorder, it can be a crippling psychological phenomenon that is even more common among graduate students than in the general population.

“Many of the graduate students I’ve worked with are very high-achieving and objectively quite successful, but they are on the more severe range of the spectrum,” she said. “It’s something that is really troubling them on a daily basis and keeping them up at night.”

Impostor syndrome hit master of surgery student Murodbek Akhrorov when he came to Canada to study. Accepted into medical school at age 16 in his home country of Uzbekistan, he completed his training there, then won a government-funded scholarship and landed a spot in one of Canada’s top medical programs at the U of A. He was feeling fine until he started comparing himself with other students in his program.

“The English language that we learned at home is very different from Canadian English, and there are huge cultural and academic differences,” Akhrorov said. “That’s when I felt that I didn’t belong here, I didn’t deserve to be here.

“I was actually really thinking I should leave and go back home and say I just failed. That’s how scared I was.”

Akhrorov had several of the risk factors for impostor syndrome that Ponting identified:

Typical symptoms include attributing accomplishments to external factors such as a fluke or good luck rather than their own competence, not internalizing success and obsessing over small mistakes instead, and minimizing accomplishments by brushing off compliments and staying quiet to avoid being found out, Ponting said.

Impostor syndrome was first identified in the 1970s by researchers Pauline Clance and Suzanne Imes, who were studying high-achieving women, but it is now understood that it can affect anyone. The U of A started offering the impostor syndrome workshop in 2015 after registered psychologist Richard Dietrich noticed the need among both graduate and undergraduate students.

Impostor syndrome can be a temporary, situational issue for some but can haunt others throughout their lives, Ponting said.

“If somebody is unwilling to apply for jobs or awards, thinking that it would be a joke or that they would be rejected, that can be a sign that their functioning is being impaired by impostor syndrome,” she said.

Ponting added the syndrome can recur throughout their careers.

“Their whole professional life is built on this shaky ground of self-doubt, which can be really disconcerting as they move into career paths where confidence and belief in oneself should be a powerful and positive motivator.”

Some people will burn out relationships with friends and family by constantly seeking reassurance and support, while others will become defensive and unable to accept any critical feedback because it’s so threatening to them, she said.

Ponting recommended that anyone who becomes so distressed they feel depressed or anxious should seek professional psychological counselling.

In the workshop, Ponting has students fill out the Clance Impostor Phenomenon Scale, a self-assessment tool.

Sharon Lee, a medical laboratory sciences student, scored 81 out of a possible 100 on the scale, indicating intense impostor experiences. She said she’s known for a few years that she suffers from impostor syndrome.

“I’ve tried to know the signs and symptoms and I’ve tried to cut back on that kind of thinking, but it’s not easy to change your mindset,” she said.

Lee, who has nearly completed her second undergrad degree, said she was a high achiever in high school who struggled when she first got to university.

“I realized that just because I was smart didn’t mean I had intelligent study habits, so I went from high grades to basically rock bottom,” she said. “I berated myself too much for not having those skills, even though it made sense because I hadn’t had to use them very much. I think I’m still trying to overcome that.”

Ponting said the first step toward treating impostor syndrome can be simply understanding what it is and why you might suffer from it.

Desmond Yim, a master’s student in preventive medicine and president of the Department of Medicine graduate students’ association, said he felt relief at the workshop when he learned how common the syndrome is among students.

“I felt very much relieved—and not just for myself, but for other people in my life who are experiencing impostor syndrome,” Yim said. “I can see my friends feeling bad when they compare themselves to other people because we are living in a very competitive world.”

Ponting said she works with students to reframe their automatic negative thoughts.

“Say the person thinks they won an award just because the awards committee was in a good mood that day,” she said. “I will ask them to look at what evidence they have for that, so they can change that thought to something like, ‘I don’t know what the award panel’s mood was when they chose me as the winner, but I do know that the process for determining award winners is usually fair.’”

Akhrorov’s family, his new Canadian friends and professors helped him adapt to the Canadian academic culture and overcome his impostor syndrome, and he will soon finish his U of A program and return to practise medicine and teach in Tashkent. In the meantime, he shares his experience with other foreign students.

“Knowing I’m not alone really helped me,” he said. “Now I tell others who are just arriving, ‘You should not be worried, everyone can feel that—after some time you’ll feel much better.’”

Sharon Lee will graduate in the spring and tries to focus on the positive rather than the negative.

“When I complete an assignment, even if I didn’t get it done as well or as quickly as I would have liked, I pat myself on the back for getting it done,” she said.

“I build up small accomplishments and give myself pep talks. I’m enjoying myself a lot more.”