Use your capacity for compassion, Clara Hughes tells grads

The most important lesson was learning the value of sharing my struggle.

Olympian and mental health advocate encourages class of 2014 to reach out, share struggles and be there for others. 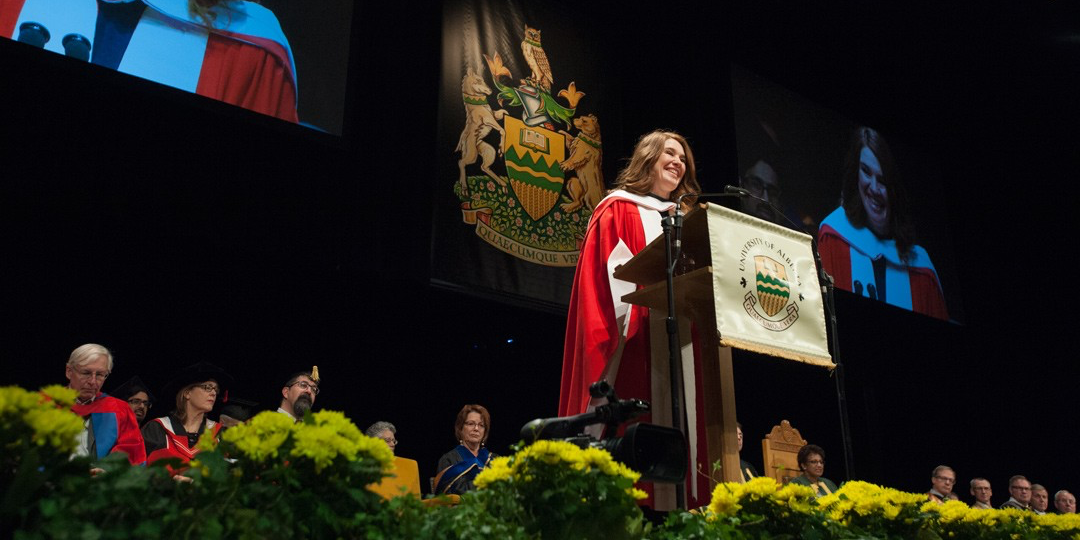 (Edmonton) Success is not just in winning, according to Olympic athlete Clara Hughes, but in showing compassion for others.

The six-time medallist urged graduating students at the University of Alberta to use the capacity they have, even as they move into new lives, “to reach out and make a difference, and possibly save a life.”

In accepting an honorary doctor of laws degree from the U of A Nov. 18, Hughes shared her personal story of battling through mental illness, saying that despite a string of prestigious medal wins in cycling and long-track speed skating in the Summer and Winter Olympics, there was still a part of her that was incomplete.

“The most important lesson was learning the value of sharing my struggle,” Hughes told an audience of graduands from the U of A faculties of arts, business, extension, law, native studies and nursing.

Hughes is the only Canadian to have won medals in both the Summer and Winter Olympics. She earned two medals in cycling and another four, including a gold, in speed skating, and served as the Canadian flag bearer for the 2010 Vancouver Olympic Games. She is also a recipient of the International Olympic Committee’s Sport and Community Trophy, a member of Canada’s Sports Hall of Fame and an officer of the Order of Canada.

Growing up, Hughes said, she was a kid who got into trouble, with no outlet into high-performance sport, but that changed at the age of 16 as she idly watched speed skater Gaetan Boucher compete on TV.

“He showed me what it was like to care; he showed me excellence and the willingness to suffer for something that mattered. My life from that day changed.”

An inspired Hughes went back to school and began training. Her troubled background of family dysfunction and mental illness was soon channelled into sport, and her competitions took her all over the world.

“I couldn’t run for long, though,” she said, when she realized her first medal wins weren’t making her happy. It took her two years to accept help to deal with her mental illness, she said. “I came back because I accepted that even I was not strong enough to heal alone.”

Hughes went on to win more medals, and after the Vancouver Olympics, when she became a widely recognized public figure, she realized she needed to do more to spread awareness about mental illness.

Today, Hughes sits on the international board of directors for Right to Play, a global organization that uses the power of play to educate and empower children facing adversity. Earlier this year, as part of her work as a leading mental health advocate, she undertook “Clara’s Big Ride” for Bell Let’s Talk, a 110-day, 12,000-kilometre national bicycle tour to help grow awareness, acceptance and action to create a stigma-free Canada.

She asked the U of A graduands to remember that excellence is not just defined by winning. “It means sharing, it means connecting, mindfulness, being present for somebody when you see them struggling. That possibility is in each and every one of us.”

“What makes Canada beautiful,” she added, “is our humanity.”

Use your capacity for compassion, Clara Hughes tells grads