Use your education to save the planet, Schindler urges science grads 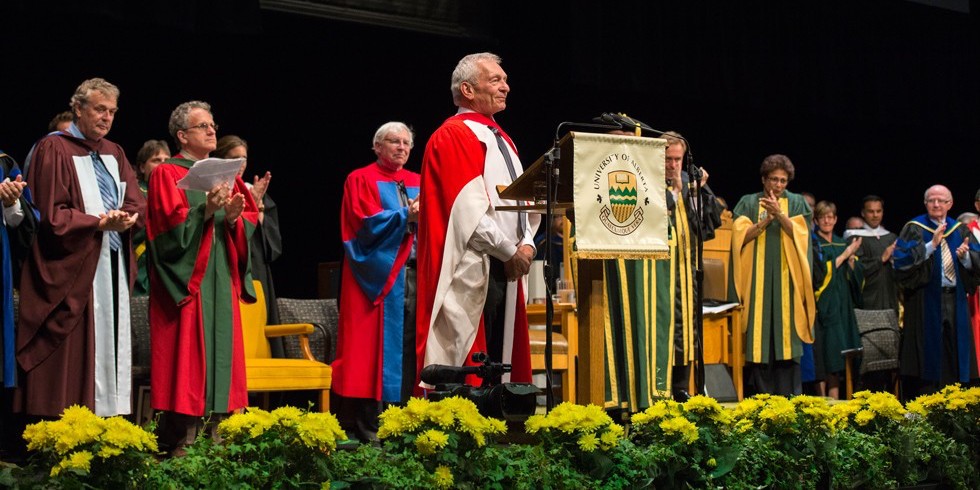 (Edmonton) Never one to mince words, David Schindler said it was up to today’s graduates to dispel the myth of unlimited economic growth and halt the rampant destruction of the Earth’s ecosystems.

“My generation of scientists have made a good start,” the retired U of A freshwater expert told science graduands at the afternoon convocation ceremony June 10. “It will be up to your generation to enhance this knowledge and use what you learn to protect the planet on which we and other species depend.”

For 25 years before his retirement last fall, Schindler was one of the U of A’s most tenacious environmental watchdogs, never afraid to speak his mind and stand up to what he saw as flawed government policy.

One of his earliest discoveries of the late ’60s led to a ban on detergent phosphates, which he showed were starving lakes of oxygen. He saw evidence of global warming in the early ’70s before most people had heard the term. And he proved that acid rain was causing the widespread death of fish in the ’70s and early ’80s.

Most recently, he collected irrefutable sets of data showing that contamination of Alberta’s Athabasca River can be at least partly attributed to emissions from oilsands production.

For his impressive record of science advocacy, Schindler has earned numerous national and international awards, including the Gerhard Herzberg Gold Medal, the first Stockholm Water Prize, the Volvo Environmental Prize and the Tyler Prize for Environmental Achievement. He was made an officer of the Order of Canada in 2004.

In his address Tuesday, he underscored the dramatic growth of the world’s population since he was born—from 2.2 to 7.3 billion and projected to hit between 10 and 16 billion by the turn of the next century. The resulting damage to the Earth has been extreme, he said, well beyond the planet’s ability to sustain it.

“It is estimated that current rates of extinctions are 1,000 to 10,000 times greater than before humans began their exponential increase, causing losses of species comparable to those caused only by massive meteorite impacts or volcanism events before the Anthropocene era,” he said, adding that with our enormous capacity for denial, we simply “wash away anything unpleasant, unsanitary or toxic into the nearest watercourse.”

This damage is often ignored in the name of economic growth, progress and a false notion of success, one that doesn’t seem to have brought humanity any increased measure of happiness, he said. He argued that we live in an age when the economy is revered like a god, and where CEOs and politicians have become “Economy’s high priests and acolytes.”

“To please Economy, we are exhorted to sacrifice our children, by exposing them to airborne and waterborne toxins, rather than knives as in primitive cultures.  Yet as scientists have pointed out for a generation, Economy is based on a falsehood: that it can expand indefinitely in a finite world.”

The reality, he said, is that our demand is outstripping the Earth’s supply by 1.6 times, a clearly unsustainable condition. Even in resource-rich Canada, water supplies are quickly drying up.

“There is no more food at Earth’s banquet table, even if we assume that only humans are entitled to eat there. This is why climate is changing and biodiversity is declining. Industrialists and politicians haven’t noticed that the Earth-well is dry.

“The challenge to your generation is to set a new course, one which will replace old values with new ones…. We have done our best to educate you well for this,” he said. “When I look at this sea of eager and intelligent faces, I am confident you are up to the task.”

Use your education to save the planet, Schindler urges science grads