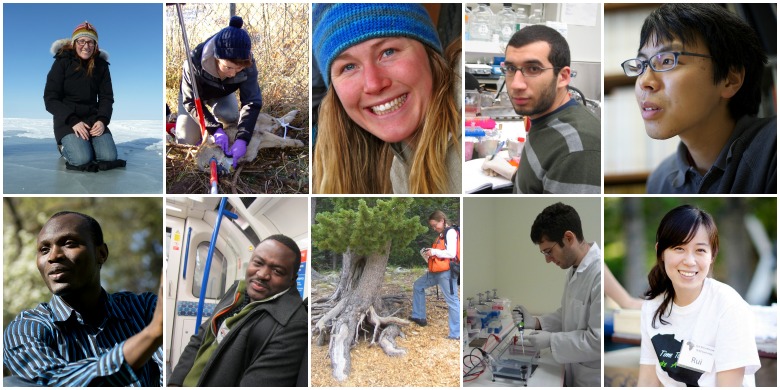 “The Vaniers are Canada’s most prestigious graduate student award, and I am proud to recognize our 10 Vanier scholars,” said U of A President Indira Samarasekera in an official statement. “They are exceptional and talented students who will contribute to both our campus and society at large through their innovative research and discoveries.”

The Vanier Canada Graduate Scholarship program aims to attract and retain world-class doctoral students by supporting students who demonstrate both leadership skills and a high standard of scholarly achievement in graduate studies. Vanier scholars receive $50,000 annually for up to three years, and each was chosen as a result of their leadership and high scholarly achievement in graduate studies in the social sciences and humanities, natural sciences, engineering and health research.

Amy Colquhoun, who studies epidemiology in the School of Public Health, will be part of the interdisciplinary and intersectoral Canadian North Helicobacter pylori (CANHelp) Working Group based in the Department of Medicine, with links to other departments.

Colquhoun will conduct her thesis work as part of a broader research team, in collaboration with northern Aboriginal communities, to address concerns about a bacterium that is a risk factor for stomach cancer.

She says she hopes her research will aid investigations and public health strategies on effective communication and decision-making in situations where there is a specific health concern.

“The U of A provides an exceptional environment for public-health research in northern Canada, and I have the privilege of learning from leading researchers,” said Colquhoun. “The U of A is also highly supportive of northern research through its northern strategy, and through the on-campus presence of the Canadian Circumpolar Institute.”

Maureen Murray, a PhD student in the Department of Biological Sciences, will use the Vanier Scholarship to explore what makes a coyote more likely to become food-conditioned and habituated to people, in an effort to better understand how society can prevent human-wildlife conflict while still retaining the benefits of wildlife in our cities.

“I chose the U of A for my doctoral degree because of its strong focus on wildlife ecology,” said Murray. “There is an extraordinary group of professors and students studying a wide range of wildlife here.”

Stephanie Peacock, also in the Department of Biological Sciences, is looking at the transmission of parasites from domesticated salmon to wild salmon on the west coast of British Columbia, and the impact of parasitism on wild juvenile salmon populations.

She says she began this line of research to understand one part of how the expanding aquaculture industry is affecting coastal ecosystems, and hopefully to make change for the betterment of these ecosystems.

Peacock says she hopes to show students in biology and other disciplines how useful mathematics can be to answer applied questions. Coming from a biology background, she says she has witnessed first-hand how mathematical modelling research done by U of A researchers has affected how salmon farms are managed with respect to wild salmon.

“I'm often told it seems an odd choice to move from Victoria, where I completed my undergrad, to Edmonton to study salmon,” said Peacock. “But the U of A offers me opportunities that universities in B.C. couldn't.”

She lists the reputation of the Centre for Mathematical Biology and the renown of the U of A’s mathematical biologists among the draws of the university, as well as the gathering of minds taking place. “The U of A is a big university, which means lots of keen graduate students in biology to work with and gain inspiration from.”

Ahmed Abdelfattah, who is working towards a PhD in chemical biology, comes from Egypt to work in the Department of Chemistry’s Robert Campbell Lab to develop protein sensors that will help neuroscientists visualize and decode fundamental aspects of brain function and provide new insights into a variety of neuronal disorders.

Abdelfattah says what drew him to the U of A was its strong foundation of protein engineering expertise and the chance to work in the newly opened Centennial Centre for Interdisciplinary Science.

“This gives me a priceless opportunity to interact with like-minded researchers on a daily basis, which I believe is vital to expand the breadth of my education to encompass the entirety of cutting-edge chemical biology research,” he said.

Tetsuto Miyashita, who says he has dreamed of coming from Japan to work in the U of A’s renowned paleontology program for as long as he can remember, says he is hoping to use his time at the Bamfield Marine Sciences Centre, the U of A's west coast field station, to take on long-standing questions on the ancestry of vertebrates.

“My goal is to tell something about our own evolutionary heritage from 600 million years ago that no one knew before,” said Miyashita, adding that the U of A’s resources for achieving his goal are more extensive than he ever imagined. “In addition, I have wonderful mentors here who trust me with freedom to pursue my curiosities.”

Nathan Andrews, a second-year PhD student in the Department of Political Science, who earlier was named a $180,000, three-year Trudeau Scholarship winner, was awarded a Vanier for a project looking at the social and environmental impact of mining in Ghana, with a focus on U.S. and Canadian mining interests.

“I researched [the U of A] and found it to be a very diverse, open and forward-thinking community within which my critical research will be well received,” said Andrews. “The diversity in and leadership of the Department of Political Science did play a huge part in this decision.”

Eyene Okpanachi will also be working in the Department of Political Science, comparing established Canadian federalism and the challenges facing federalism in his native Nigeria. He says federalism offers both solutions and obstacles to establishing sustainable peace among diverse groups and facilitating effective management of natural resources and public finances.

“The U of A’s Department of Political Science offers the unique advantage of fostering an in-depth focus on power relations of institutional actors and political economy,” said Okpanachi. “The department is also known for attracting the best students from a diverse range of countries.

“The opportunity to share and learn from such an international pool of world-class graduate students is one of the rich experiences of studying in the U of A.”

Jennifer Klutsch, who comes to Edmonton by way of the United States, has joined the Department of Renewable Resources to take up the fight against the mountain pine beetle in jack pine forests. She says she would like the research to enhance understanding of complex interactions between pathogens and insects and how this interaction affects regulation and co-ordination of plant-defense chemistry.

“I came to the U of A because of its strong research reputation and the unique position that Alberta is in with the potential for a native insect shifting to a naive host,” said Klutsch.

Joshua Miller, also from the United States, is looking to find the genes that control horn growth in bighorn sheep. By understanding the genetic factors that contribute to horn size—a major factor in reproductive success—he says scientists can help protect the ability of populations to produce healthy, trophy-quality individuals.

Besides molecular ecology of wild populations being a forté of the biological sciences department, coming to the U of A means access to the state-of-the-art Molecular Biology Service Unit housed in the Centennial Centre for Interdisciplinary Science. “I chose the U of A to conduct my research because I knew it would provide me with a unique learning opportunity and environment.”

Rui Zhou, from China, is looking at locomotor networks in the human lumbosacral spinal cord. Her aim is to develop novel rehabilitation interventions to improve function for people with limb amputations or those with complete spinal injuries.

Zhou hopes her research will enhance the integration of artificial limbs with the human body, making it easier for amputees to use them more intuitively. Another aim is to help people with spinal cord injuries improve their walking abilities, increasing their independence and quality of life.

Zhou said the opportunity to work under the supervision of Vivian Mushahwar, a leading spinal researcher, and the Centre for Neuroscience, were among her key factors in choosing the U of A.