It offers that role-playing experience in a way that more effectively communicates what we want players to learn.

Players learn by being a bartender who must choose how to react while witnessing one of three sexual harassment scenarios. 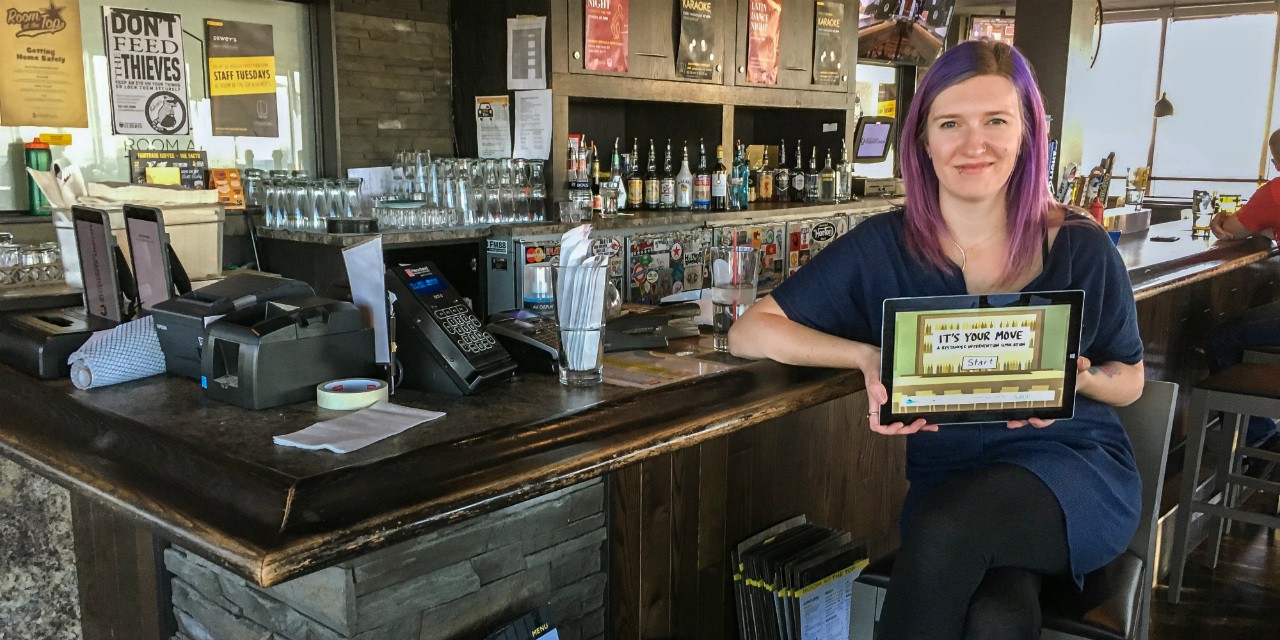 Kenzie Gordon created the video game "It's Your Move" to help bar staff safely intervene when they witness sexual harassment. "We want to make it obvious to bar staff that there is more than one way to intervene," she says. (Photo: Bev Betkowski)

A video game created by a University of Alberta student is one of the leading tools being used to fight sexual violence in Edmonton.

The two groups rolled out their strategy this morning to train bar staff in how to safely intervene when they witness sexual assault and harassment.

Creator Kenzie Gordon, a graduate student in the Faculty of Arts, designed the game as part of her work to earn a master’s degree in humanities computing, and sees it as an approachable way to train bar staff, better than traditional role-playing in training workshops, she believes.

“It can be hard in role-playing to get people to react in a realistic way. This video game is interesting and fun, so it might stick with participants longer. It offers that role-playing experience in a way that more effectively communicates what we want players to learn.”

The game has three scenarios people can play through as the bartender. One sees a co-worker being sexually harassed by a customer; the second is about unwanted drinks being pushed on someone’s date and the third involves helping patrons who are being coerced to leave the bar with someone who makes them uncomfortable.

“All three are fairly common scenarios,” said Gordon. “They are all definitely things that happen, but bar staff don’t always have the opportunity to build a plan together.”

It’s Your Move offers bar staff four strategies developed by sexual violence advocates and endorsed by UASAC and SACE: direct confrontation, delegation (asking someone to help), distraction (defusing the situation by distracting the offending person through conversation) and delay (checking in after the fact with the person they are concerned about to offer additional support).

The game walks the player through the various consequences of each choice they make.

“We want to make it obvious to bar staff that there is more than one way to intervene, to know that they are going to have to think on their feet, but with some training they can develop those skills,” said Gordon.

After spending three years on the front lines as a social worker, Gordon realized she wanted to make a difference in a more widespread way, so she enrolled at the U of A.

“I want to work towards a cultural change, because the bigger problem is in how culture understands domestic and sexual violence and whether the system supports survivors. Cultural change has to happen if we are going to move the needle.”

Gordon also happened to love video games, and after taking the U of A’s Understanding Video Games MOOC, she knew she wanted to design a game that would do more than entertain—it would educate. She also knew they were all but unheard-of in training professionals in violence prevention.

“But it’s such a powerful medium, it made sense to try it.”

Gordon next plans to design a video game for junior and senior high school students, about informed sexual consent.

“It’s a medium that a huge percentage of the population engages in; games are huge and we aren’t taking advantage of everything they can offer—there’s a lot more that games can do.”

Gordon’s work was funded through U of A Community Service-Learning and a Boardwalk Rental Communities Learning and Change Award.