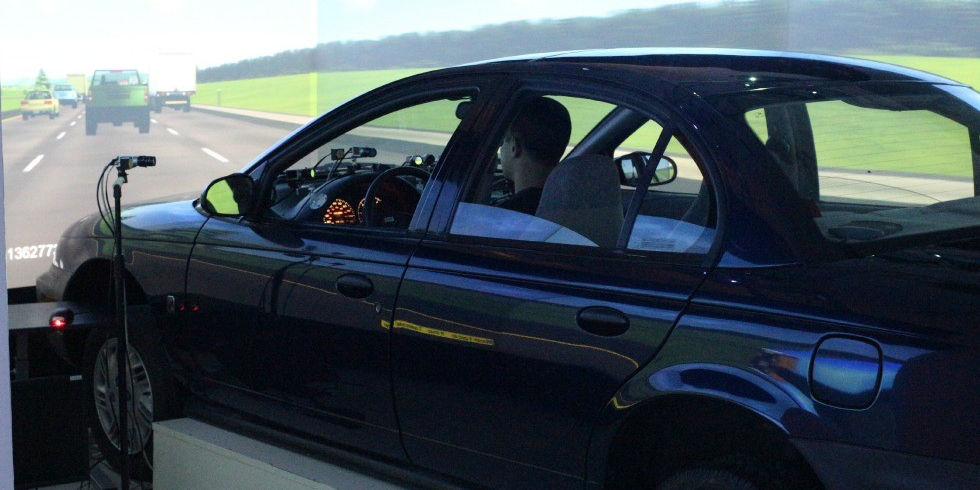 In a driving simulator, study participants were better at avoiding collisions while using a cellphone if the phone gave the caller a video view similar to what a passenger would see.

“A passenger in the car with the driver is not nearly as distracting as a conversation partner on the phone,” explains Kyle Mathewson, a new faculty member in the Department of Psychology at the U of A. “[This is] due to their modulation of the conversation along with the drive, as well as increased references to traffic, assisting the driver with the task.”

Research has shown that it’s the conversation itself, not holding the phone, that is the distracting element for drivers. In this study, a one-way, hands-free video phone was shown to be superior to a hands-free cellular phone at helping drivers hold a conversation and hold the road at the same time.

The video gave callers a view from the driver’s perspective, which helped them recognize challenges for the driver and adjust or pause the conversation to avoid presenting additional distractions—more like a conversation with a passenger.

Mathewson says the idea was born from a Skype conversation he had with his brother during a long drive: “I decided to show him video of the road as we spoke, and we brainstormed about how this might help to make our conversation less distracting as he could see the important events on the road.”

Using a driving simulator, the researchers tested four scenarios: the driver alone in the car, in the car with the friend, or with the friend on speakerphone from another room (with and without video). As expected, speaking to someone on a cellphone while driving was the most dangerous of the conditions because the caller had no awareness of what was going on inside or outside the car.

However, when the conversation partner was shown a view of the driving scene and the driver’s face, although there was no difference for the driver, the chance of collision reduced to match the scenario in which the friend was a passenger in the car. Mathewson attributes this improvement to changes in the conversation. “The friend could now identify obstacles, warn the driver and stop talking so the driver could focus. They talked about traffic more on the video phone, for instance.”

Mathewson says the video technology could eventually be integrated into vehicle designs. “We hope to get sponsorship from the automotive or insurance industries in order to study the feasibility of implementing these technologies and organizing testing in realistic or real driving situations.”

The researchers are now working on a followup study involving older drivers, a group known to be more prone to distraction and to have differences in attention such as poorer multitasking ability, as well as teen drivers who are faced with greater distractions while they drive.

The study was published in Psychological Science and conducted at the Beckman Institute at the University of Illinois, with support from the Office of Naval Research.