Vigil offers light for a dark day on campus 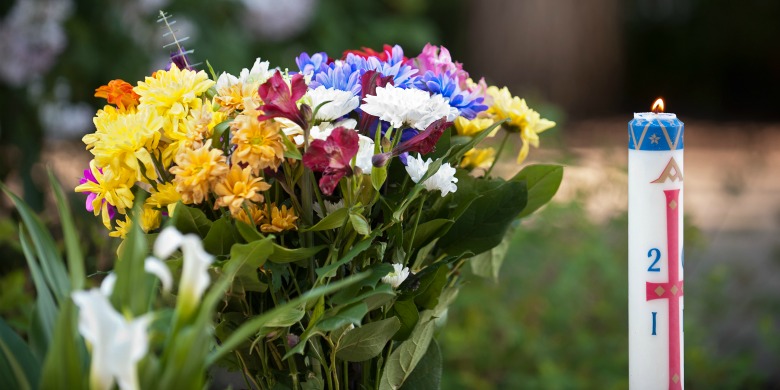 (Edmonton) The events of the early morning of June 15 in HUB Mall are a reminder that the university is not an island. Not an island in the sense that it is not immune to tragedies, and not an island in having to shoulder the full load of trying to heal the pain.

That was the message from University of Alberta President Indira Samarasekera to shocked and saddened members of the campus community in advance of a candlelight vigil that was hastened together by the university’s Chaplains’ Association in the evening after a robbery saw Michelle Shegelski, Brian Ilesic and Eddie Rejano lose their lives, and left Matthew Schuman fighting for his.

“Like all other communities in Edmonton, across Canada and the world, we are vulnerable to unpredictable, senseless acts of violence,” wrote Samarasekera. “We have received notes of concern and support from individuals, organizations and post-secondary institutions near and far. Knowing that we have such widespread support has been a source of comfort during a very difficult day.”

The full contingent of the Chaplains’ Association was on hand for the interfaith vigil, including Bodhi Sakyadhita, who gave a Buddhist blessing.

“It was important to act quickly because people are not only displaced from their homes, they’re feeling displaced in a spiritual and mental sense as well,” she said. “We thought if we could do something, that would help them with the immediate feelings they were having.”

Sakyadhita said along with chaplains, grief counsellors continue to be available to support displaced and distressed members of the U of A community. “We just wanted to put a frame around [the incident] that was spiritual, with blessings and peace and hope.”

Sakyadhita said the vigil was also a time to alleviate any safety concerns, adding the incident was not a random act.

“We wanted to reassure students that they were safe,” she said. “A lot of times it helps people to feel like they can do something. Lighting a candle was what we were offering besides the prayers and blessings.”

The assertion that the U of A is and will continue to be a safe place to live, learn and work was addressed by Carl Amrhein, provost and vice-president (academic), who talked about campus safety in his first address to the university community just hours after the incident.

As part of keeping the campus safe, university officials are planning a full review of emergency procedures to see whether and where emergency response can be improved. In the meantime, Samarasekera wrote, healing is the first priority.

For those who have asked about donations, G4S has established a trust fund for the families of the victims. Donations can be made at any TD Bank branch in Canada.

Where to find counselling and support

Vigil offers light for a dark day on campus
Newsroom