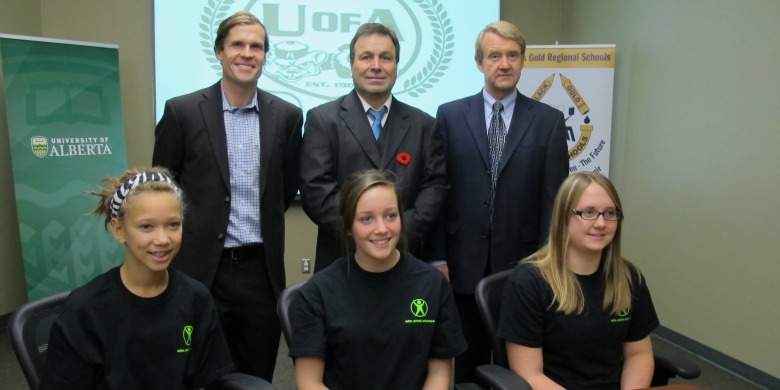 (Edmonton) Children need a minimum of seven minutes a day of vigorous physical activity, according to recently published findings by University of Alberta medical researchers and their colleagues across Canada.

“If you watch late-night television or look in the backs of magazines, you’ll see magical ads saying you need just five or 10 minutes a day of exercise to stay fit. For those of us in the medical field, we just roll our eyes at that. But surprisingly, they may actually be right, and that’s what this research shows,” says co-principal investigator Richard Lewanczuk, a researcher with the Faculty of Medicine & Dentistry at the U of A.

“Our research showed children don’t need a lot of intense physical activity to get the health benefits of exercise—seven minutes or more of vigorous physical activity was all that was required. But the seven minutes had to be intense to prevent weight gain, obesity and its adverse health consequences. And most kids weren’t getting that.”

Lewanczuk worked on the study with Jonathan McGavock, his co-principal investigator and former post-doctoral fellow, who now works with the Manitoba Institute of Child Health. They collaborated with Black Gold Regional Schools in Leduc and surrounding communities just south of Edmonton, as well as researchers from the University of Manitoba, Queen’s University, the University of Newcastle, and U of A researchers in medicine and dentistry; public health; physical education and recreation; and agricultural, life and environmental sciences. The team’s findings were published in the peer-reviewed journal Archives of Pediatrics & Adolescent Medicine.

More than 600 children aged nine to 17 wore monitors that tracked their physical activity levels for seven days. The children also had their weight, waist circumference and blood pressure regularly monitored.

The value of vigorous activity

The more vigorous the physical activity, the less apt the children were to be overweight. Children who were overweight had improved fitness levels and shrinking waistlines when they spent more time doing vigorous activities.

Lewanczuk noted that children in the study didn’t show the expected health benefits from doing only mild or moderate activity, even if the time spent doing this type of activity increased. What seemed to be critical was taking part in intense physical activity. Kids who took part in vigorous physical activity for longer than seven minutes had significantly better health benefits.

The team’s data also didn’t support the notion of children being overweight but fit. If children were overweight, they were also unhealthy, Lewanczuk said.

“This research tells us that a brisk walk isn’t good enough,” said Lewanczuk, a professor in the Department of Medicine who has been studying this topic for eight years. “Kids have to get out and do a high-intensity activity in addition to maintaining a background of mild to moderate activity. There’s a strong correlation between obesity, fitness and activity. Activity and fitness is linked to a reduction in obesity and to good health outcomes.”

Getting young children to make vigorous physical activity part of their daily routines is important, especially considering that activity levels in the teenage years drop right off, Lewanczuk said. Previously published research from the same group of children showed kids are more active at school than they are at home.

“Quite often the activity levels on evenings or weekends would be almost flat,” he said. “We made the presumption that kids were just sitting in front of a screen the whole time.”

Lewanczuk hopes the findings will help schools decide what type of mandatory physical activity is needed. He praised the school district involved in the study, noting the research wouldn’t have been possible without its support.

The primary funders of the research were the Canadian Diabetes Association and the Alberta Centre for Child, Family and Community Research.