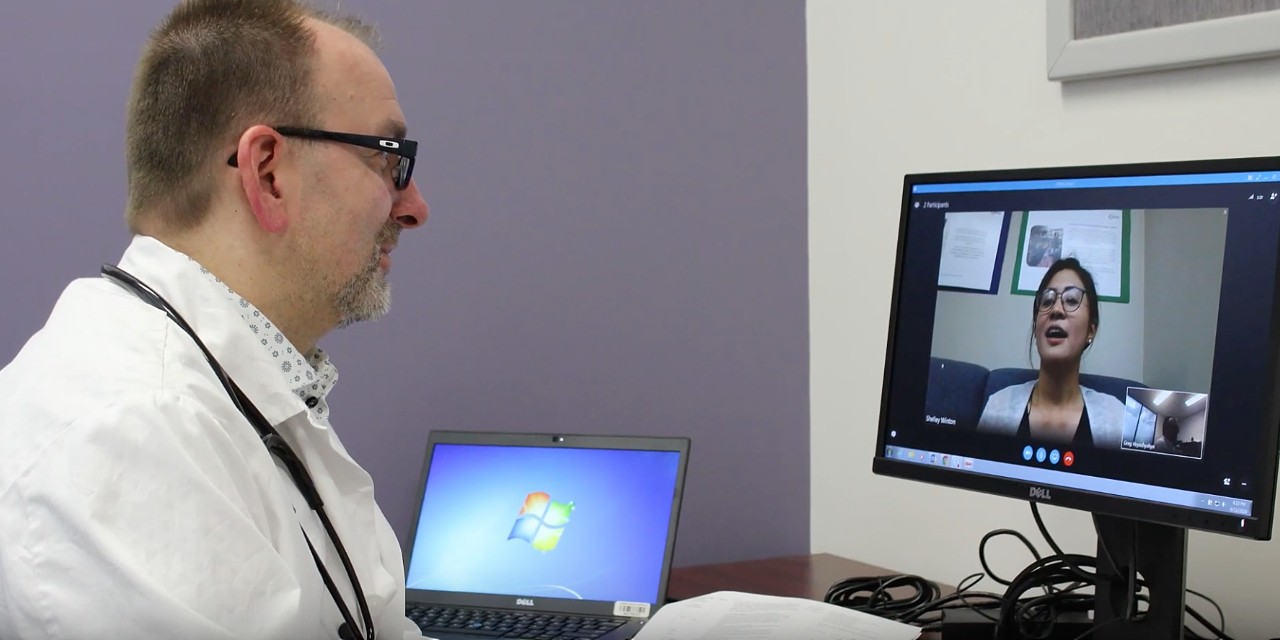 A joint University of Alberta and Alberta Health Services project to provide virtual hospital services at home for patients with complex medical issues is showing promising early results, according to its senior medical director.

“So far the model has demonstrated an improvement in patient experience and care, reduced ER visits and reduced costs,” said Narmin Kassam, professor of internal medicine at the U of A and deputy clinical department head with AHS.

The Edmonton Zone Virtual Hospital provides complex case management, medication management, self-care education, provider linkages and connections to primary care physicians for patients with multiple medical issues who have been discharged from acute care at the University of Alberta Hospital.

Their care includes daily phone calls from a nurse or pharmacist, video conference calls with specialists and a pharmacist review of all their medications, and may also include intravenous treatment by a specially trained team of community paramedics. This is all provided in conjunction with community home-care services.

The most common primary diagnoses were congestive heart failure and chronic obstructive pulmonary disease, but on average the patients had 10 medical problems each and were on eight to 15 medications, with up to five specialist teams following them.

“These are complex patients, and there are circumstances where you cannot prevent an admission and stay in an acute care hospital,” explained Kassam.

Kassam said her team identified the type of patients who would benefit from the virtual hospital before it launched by analyzing the charts of 125 patients who were frequently admitted to the U of A Hospital.

The Canadian Institute for Health Information defines high system users as anyone who has had more than four admissions per year and a cumulative length of stay of more than 30 days. The top five diagnoses for high system users nationwide are congestive heart failure, chronic obstructive pulmonary disease, pneumonia, myocardial infarction and hip fractures.

“We wanted to see if our high system users fell into those buckets, and they did,” Kassam said.

“We know from the literature that five per cent of patients use 64 per cent of health-care resources,” she said. “The biggest cost drivers are emergency department visits and inpatient admissions.”

According to the health-care usage study, which will be published in the Canadian Journal of General Internal Medicine later this year, the 125 high system users accounted for more than 600 admissions, each averaging five admissions per year, staying a median of 49 days and using nearly 8,000 bed days in total.

“Looking at that overall use, you could basically staff a full unit just for high system users for the whole year,” Kassam said. “That’s pretty significant.”

Kassam said the goal of the virtual hospital project is to provide better co-ordination and support for high-user patients so they can receive acute comprehensive care in the community, stay at home and avoid emergency department visits and hospital readmission.

“We knew that when complex high-needs patients leave acute care hospitals there is a gap after they go home,” she said. “So we visualize the virtual hospital as the safety net to fill that gap.”

Clara Carlson, 86, was admitted to hospital several times a year for months at a time with myasthenia gravis, an incurable condition that causes muscle weakness. In a video produced by AHS, she and her family discuss the benefits of receiving treatment at home thanks to the virtual hospital program.

“It was comforting to us to know that someone was watching out for us, that we weren’t just out here all alone,” she said. She has not had to go to emergency since her stay in the Edmonton Zone Virtual Hospital.

Kassam said the ultimate goal is to give patients the tools they need to avoid a crisis.

“Through teaching and supporting self-management, our goal is eventually to get to a place where the patient and the family can start to recognize when they need to ask for help early so they don’t end up in acute care,” she said.

Kassam said aside from the cost savings the virtual hospital provides, the most important benefit is the comfort and well-being of the patients.

“Supports are coming to the patient instead of the patient having to come in with an uncomfortable ambulance ride and waiting in a very crowded emergency room,” she said.

“We know that having to go in and wait for a bed—just that process and those hours in delaying treatment when their stress level is up and they are not sleeping—results in their illness getting worse and their length of stay increasing.”

The pilot project was funded by Alberta Health Services’ Enhancing Care in the Community program.