Two STEM students will pursue social justice along with their passion for chemistry and engineering. 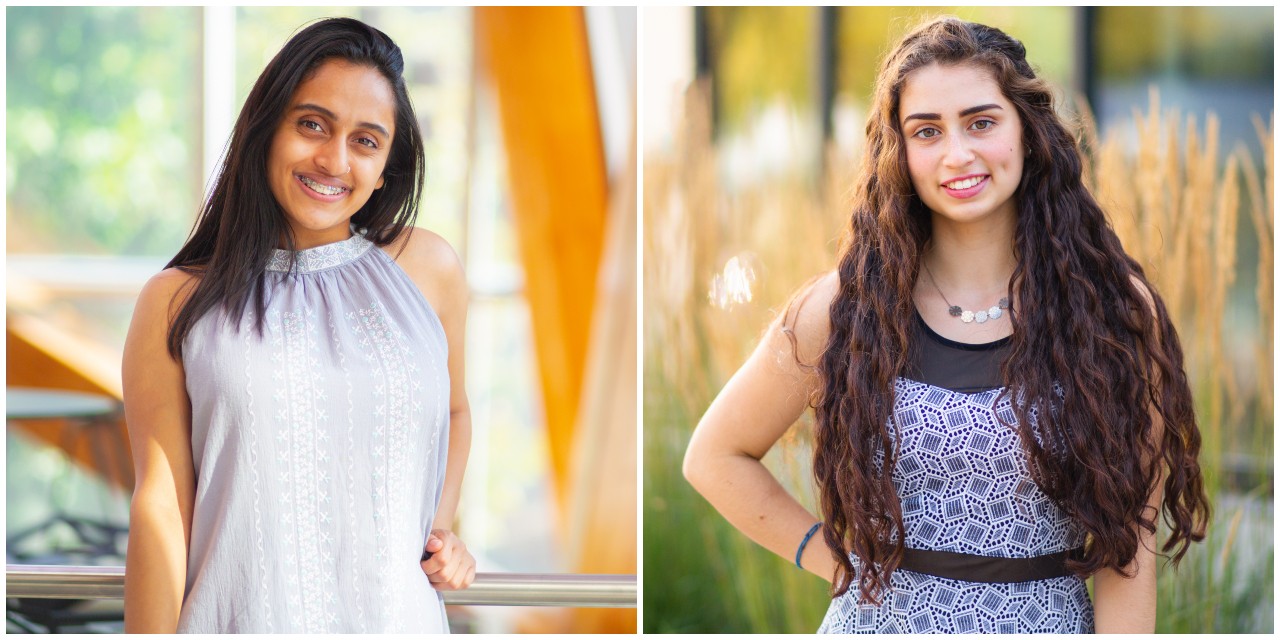 Aakankshya Kharel’s most vivid memories of her family’s move to Canada from Nepal when she was 12 are not about the cold or the tough transition, they’re about the kindness of those who lent a helping hand.

“There was a lot of people helping to integrate us into society and getting me into the cycle of things when it came to education,” said Kharel. “When I think of how many people were there to support me and get me to where I am today, there's no way I could just sit here and not pass that along.”

In fact, her efforts in the areas of activism and social justice have been so exceptional, Kharel was able to turn her efforts into one of two University of Alberta Schulich Leader Scholarships. The other award went to engineering student Anna Mueller.

The scholarships are given annually to 50 university hopefuls in Canada who are enrolled in a STEM—science, technology, engineering or mathematics—undergraduate program. Awards range from $80,000 for a science student to $100,000 for someone in engineering.

Kharel said she is using her scholarship to pursue a fascination with chemistry. As a youngster she watched her parents drag her little brother from dentist to doctor and back again in an attempt to abate the deterioration of his teeth, which experts said was being caused by a combination of his baby food and the antibiotics he was prescribed.

“I couldn’t believe the combination of food and medication had the power to affect the chemistry in something that's supposed to be such a hard substance (as teeth),” she said.

While chemistry is her passion, Kharel’s talents lie in leadership.

While attending Archbishop MacDonald High School and working part-time at the local library, Kharel spearheaded an initiative called Read Cycle, which provided literacy tools for immigrants and refugees. With grants, books and art donations, and assistance from more than 100 volunteers, she organized and delivered 500 Read Cycle packages to promote social inclusion and a sense of belonging for newcomers.

Kharel was also selected president of her school’s social justice club and an executive with her school’s peer support initiative.

“I recognize that all of my achievements are the result of communities that have nurtured me,” she said. “That’s why I want to devote every stage of my life to strengthen those communities.”

As a high-school student in New Brunswick, she volunteered as a tutor in a program for disadvantaged inner-city children, as well as the Kiwanis Club, Club Hope and SPCA club.

She also organized an online cyber-study group for a small group of international baccalaureate students after her New Brunswick high school stopped offering the physics course. And she was the assistant water polo coach for an under-12 team.

“Coaching has taught me the benefits of friendly competition, while tutoring and collaborative studying have led me to realize leadership recognizes the contributions of others and fosters the sharing of ideas,” she said.

Mueller is also a quick study. For her Grade 9 year, the future Schulich Leader went to Germany on an exchange program having never uttered a word in German—yet still opting for the accelerated German curriculum.

“I passed all my classes and now speak fluent German,” she said.

She said her time in Germany inspired her to pursue a career that will allow her to work abroad as an engineer and perhaps one day be a role model.

“I want to be an advocate for women in science, attempting to fix global problems, while helping others around me in any way I can,” she said.