Virtual reality learning tools point to future of post-secondary education, says U of A cell biologist. 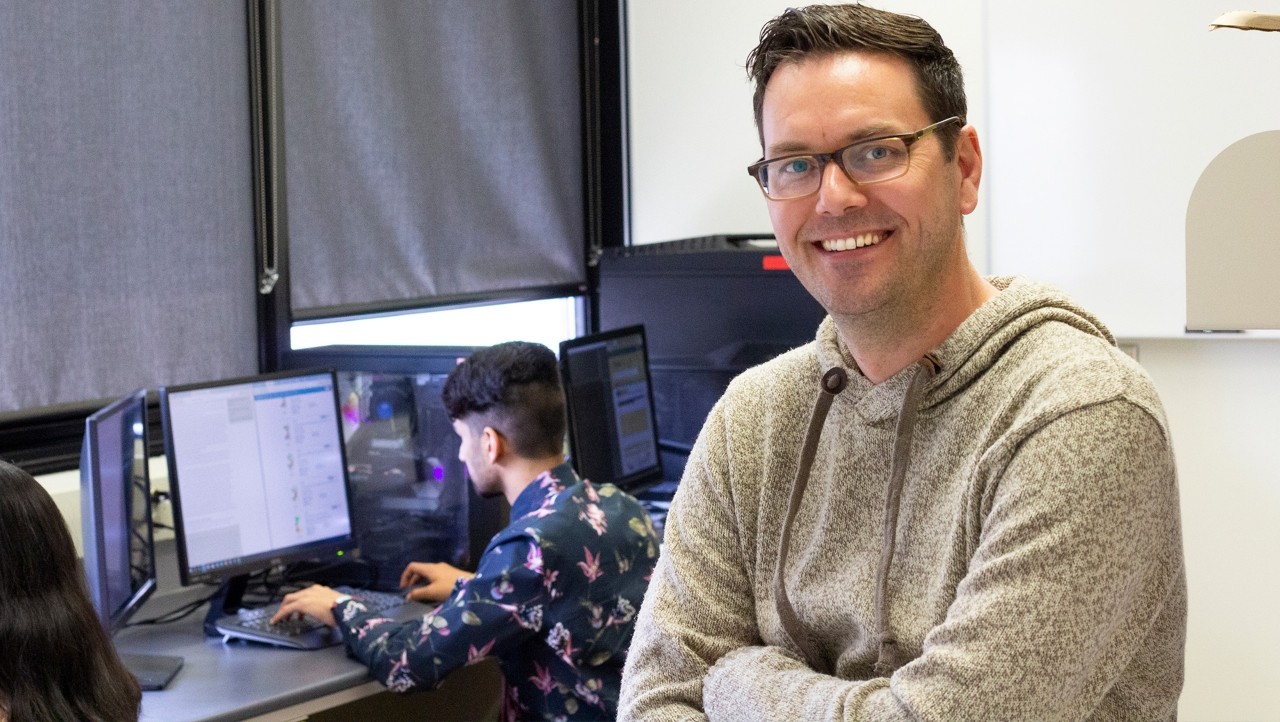 U of A cell biology professor Paul LaPointe helped create a virtual reality app that gives medical students a 3-D view of what's happening inside cells and how drugs work. (Photo: Jordan Carson)

An educational app created at the University of Alberta is giving cell biology students a brand new perspective on their subject and may also offer a glimpse into the not-so-distant future of post-secondary education.

The Cell 101 VR App shows students a virtual reality perspective of the inner workings of cells and their interactions, allowing them to visualize cell biology in a way they never could before.

“Everything that cells do is because of their internal machinery, but how this machinery is constructed from proteins and other biomolecules is very hard for students to conceptualize,” said Paul LaPointe, an associate professor of cell biology at the U of A who helped create the application.

He said it’s a difficult concept to illustrate and contextualize, making it difficult for students to understand that when a drug does something in the cell, it's because it fits in the recesses of the proteins inside, preventing them from taking a mechanical action.

“If you can tap into their imagination so that they start painting pictures for themselves and conceptualize what’s happening mechanically, then all the other stuff you have to teach becomes a little easier.”

The virtual reality (VR) app gives students a 3-D picture of the cell and what is happening inside. Instead of a static two-dimensional image seen in textbooks, learners can rotate the components to examine them from all angles, forming a complete picture in their minds.

The project began with a conversation between LaPointe and the Cognitive Projections (CogPro) group in the U of A’s Rehabilitation Robotics Laboratory. CogPro is an initiative to explore new ways of teaching health sciences through emerging technologies such as virtual reality. With LaPointe acting as the content matter expert, the team developed the app over about 18 months.

It uses Google Cardboard, a virtual reality platform developed by Google for use as a head mount for a smartphone. When users put on VR glasses, they can see four floating boards, each containing information and animations of elements of a cell structure, including lipids, bi-layer proteins and a large-scale image of the cell itself.

“I had 120 students standing in a lecture theatre looking at these things during a demonstration, and it worked amazingly well. They all loved it,” said LaPointe.

The app is mostly being used as a teaching aid for individual students or small groups due to the limited number of VR sets. But LaPointe believes it’s only the tip of the iceberg of what could be done to enhance the education of learners—many of whom are increasingly moving away from traditional patterns of learning and embracing new technologies.

“I asked my students if there was anything else they’d like to see from the course incorporated into the app, and the list was everything. Between all the students who responded, it was every single thing we learned,” said LaPointe.

He believes the future of post-secondary education will involve chaptered apps eventually replacing expensive textbooks, saving learners hundreds of dollars for each textbook they don’t have to buy.

Another technology that shows great promise in transforming learning is augmented reality (AR)—superimposing a computer-generated image on a user's view of the real world.

LaPointe believes AR could already be used to great effect in textbooks today, linking instructional videos to specific pages through a code that could be scanned through a smartphone.

While his work to date has focused on building the Cell 101 VR app, LaPointe hopes to also delve into AR in the near future. He is already taking steps through the U of A’s Heritage Youth Researcher Summer (HYRS) Program, working with high school summer students on augmented reality learning apps. The program is funded by Alberta Innovates with an aim to build expertise in Digital Health in Alberta. Together they are getting a head start on a new technological revolution LaPointe expects will soon transform post-secondary education.

“This is not going to go away. This is going to be done properly and everywhere very soon.”