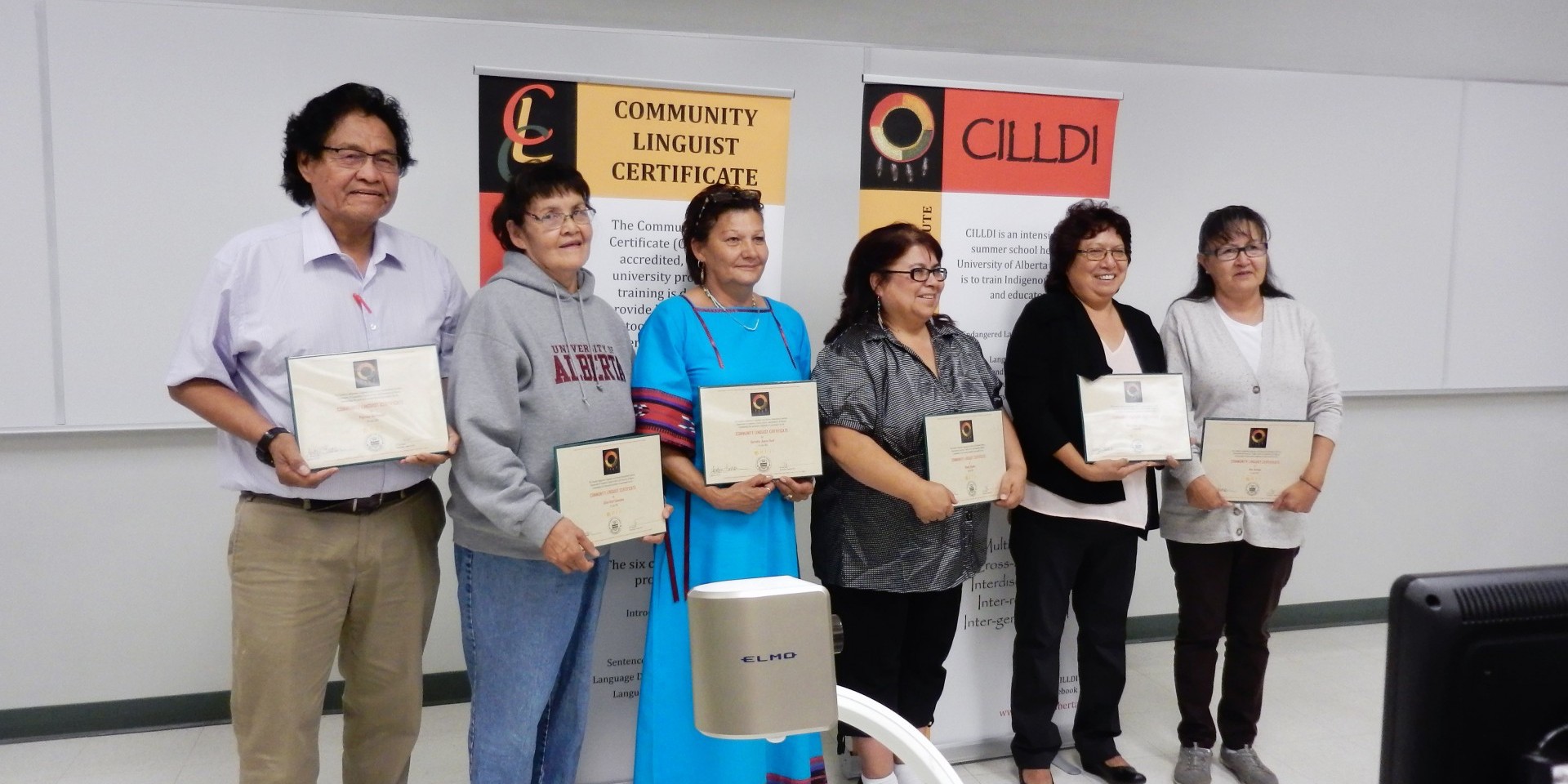 The latest group of students in CILLDI's Summer Program show off their community linguist certificates.

More than half of the world’s living languages are now considered endangered, and researchers expect thousands will die out before the turn of the century.

In Canada, many Aboriginal languages like Dene, Dogrib and Gwich’in have been identified as vulnerable or critically endangered. According to Statistics Canada, at least 10 once-flourishing languages have become extinct in the last decade.

In an effort to save some of these native tongues, the Canadian Indigenous Languages and Literacy Development Institute (CILLDI), an initiative at the University of Alberta involving the faculties of arts, education and native studies, hosts a summer school aimed at arming community members with the tools they need to preserve their native languages.

“Language is connected to culture and identity, and it’s very important for the stability of indigenous cultures and people,” says Susan Penfield, professor at the University of Arizona and CILLDI summer school instructor. “The very hard reality is that these indigenous languages are struggling to stay vital.”

Penfield has been teaching at CILLDI’s Summer Program for the last five years. She says it’s the dedicated students and overall commitment of CILLDI to restoring and revitalizing endangered languages that keep her coming back.

“The students’ commitment is extreme. Many come from remote communities and go to great lengths just to get to CILLDI,” she explains, adding she considers CILLDI to be the leading model in language preservation institutes. “There are several institutes like it, and they all serve to give communities a chance to access higher education and get skills to help them work in the preservation of their languages, but I think the structure of CILLDI sets it apart.”

Through university-level classes, CILLDI’s summer school strives to train Native language speakers and educators in First Nations languages, linguistics and language planning, as well as second-language teaching skills. Students attend the school for two 10-day sessions and earn three U of A credits, which can be applied towards a community linguist certificate.

“Every course in the program is designed to give them practical skills they can go home and use,” says Penfield. “They are learning how to write policy, document their languages, devise a language plan—real-life skills that can help to preserve their community’s language.”

This year’s CILLDI Summer School, which ran throughout July, brought in students from as far as Aklavik and Deline in the Northwest Territories.

“Due to the distance and remote locations of some of their homes, we can’t always see the results, but we know our students leave us ready to implement change,” says Penfield, recalling one student whose small band had no language plan for the long term. “He spent time in my course working towards rectifying that, and left with a strategic plan and small proposal to bring some outside speakers and experts into his community to help boost the number of speakers.”

Every effort counts, says Penfield, as experts predict that in just 20 years, only three Aboriginal languages (Cree, Ojibway and Inuktitut) will be left.

If the world loses these languages, Penfield warns, a vast knowledge base will be lost as well.

“Losing a language is a huge loss of knowledge—in Aboriginal languages we especially lose ecological language,” she explains.

“Many of my students still live off the land and what they know about it is encoded in their languages and it’s not all translatable.”

It’s an uphill battle, but one CILLDI is dedicated to fighting on behalf of Canada’s Indigenous language speakers.

“In the United States, I work with languages that are down to the last speakers—some just three or five people,” says Penfield. “Canada is in a unique situation to save their languages, and CILLDI helps give speakers a chance to keep preserve their culture and identity.”