Walking the walk on truth and reconciliation

Education leaders from across Canada come together to find the path forward in a complicated relationship with Indigenous peoples. 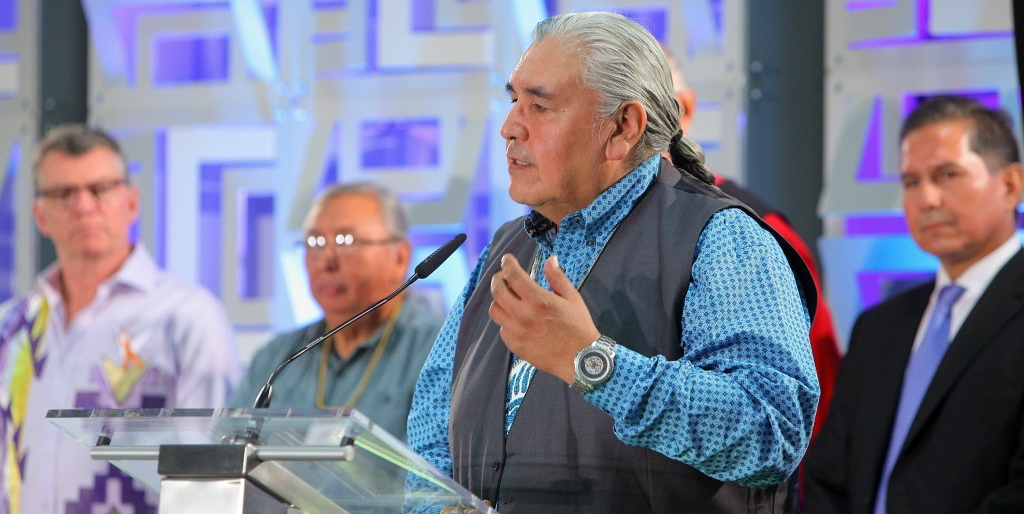 Chief Wallace Fox of the Onion Lake First Nation speaks at the 2016 Building Reconciliation Forum held at the UAlberta on September 28th and 29th. Fox created a ceremonial walking stick that was transferred to the U of A as a symbol of ongoing reconciliation. (Photo: Ellis Brothers Photography)

"Education is what got us into this mess, but education is the key to reconciliation.”

Those words by Senator Murray Sinclair, who chaired the Truth and Reconciliation Commission, were spoken at the inaugural Building Reconciliation Forum in 2015. But their echo could be felt among the university leaders, students, faculty members and community representatives from across Canada who gathered at the University of Alberta last week to talk about what comes next for acting on the commission’s recommendations.

As anthropology professor and Métis scholar Kisha Supernant notes, the U of A has a complicated relationship with Indigenous people. Built on a Métis river lot just 30 years after Treaty 6 was signed, the university has often uplifted itself on the land, bodies and knowledge of Indigenous people.

“Our response to the Truth and Reconciliation Calls to Action must go deeper than mandatory Indigenous content, territorial acknowledgments or increasing the number of Indigenous students and scholars,” Supernant said. “Non-Indigenous and Indigenous scholars need to work together to dismantle the structures of the academy that give supremacy to western ways of knowing in order to create institutions that value Indigenous knowledges and are deeply connected to the histories of the lands and territories on which they stand."

Kelsey Dokis-Jansen, Indigenous initiatives manager and an alumna of the U of A, says this history is at the heart of how the university must move forward as an institution.

Dokis-Jansen, who is Anishinaabe from the Dokis First Nation in northern Ontario, said that means “examining the structures and narratives about ourselves as post-secondary institutions and acknowledging the role that universities have played in perpetuating what Wab Kinew calls the ‘myth of cultural superiority.’” She added, “This myth, grounded in western thinking about Indigenous peoples, stretches back to the early years of colonial thought with concepts such as the Doctrine of Discovery and Terra Nullius.”

Andersen, whose academic work delves deeply into the history and identity of Métis people, believes that the work of reconciliation must be grounded in our past, but that the forum marks a turning point to look forward to our next steps.

The university is already undertaking many of these steps toward reconciliation, but this event marks another point along the path. Across campus, faculty initiatives are supporting this work. In the Faculty of Education, all new teachers are being equipped with the tools to teach Indigenous content and support Indigenous students. The Department of English and Film Studies has launched a series of events this year centred on the theme of “Responsible Relations.” A new open online course from the Faculty of Native Studies will launch in January, allowing people around the world to learn the history and current context of Indigenous and non-Indigenous relations in Canada. These efforts supplement institutional work such as building new spaces for learning and understanding between Indigenous and non-Indigenous members of the university community.

One of the most powerful moments at the forum was the passing on of a walking stick that was created by Chief Wallace Fox of Onion Lake First Nation for the first Building Reconciliation Forum at the University of Saskatchewan last year. This symbol of reconciliation was passed on by U of S Chancellor Blaine Favel and will remain at the U of A over the next year.

“At the forum, last year's host, the University of Saskatchewan, presented the U of A with a walking stick, which represents the fact that although we come from different paths, we are now walking the path of reconciliation together,” U of A President David Turpin explained. “As president, I look forward to working with the full university community to continue in this vital process of change before handing the walking stick on to the University of Manitoba at next year’s forum.”

Dokis-Jansen expressed her hope as the forum drew to a close.

“I am very encouraged by the conversations that are coming out the forum. Although it will be a long road, I believe we are getting on the right track.”

Walking the walk on truth and reconciliation
Newsroom