Walking With Our Sisters creates a path to hope amid sorrow 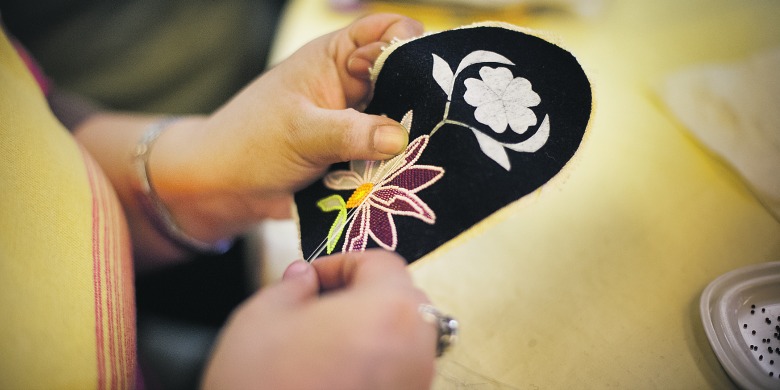 131008-walking-with-sisters-banner
The Walking With Our Sisters commemorative art installation features more than 1,700 hand-beaded moccasin vamps created and donated by 1,300 people from across Canada. (Photo: Richard Siemens)

(Edmonton) More than 600 indigenous women in Canada have been reported missing or have been murdered in the last 20 years. Many vanished without a trace, with seemingly little concern from broader society.

In an effort to shine a light on this invisible tragedy, the University of Alberta is hosting Walking With Our Sisters, a massive commemorative art installation comprising more than 1,700 pairs of moccasin vamps, created and donated by more than 1,300 caring and concerned individuals across Canada.

“It’s not about a political movement of needing a national inquiry into the 600 missing and murdered Aboriginal sisters, although obviously that’s at the exhibit’s heart, but the main idea we’ve always had is to honour our sisters—our loved ones—and family and friends of the missing and murdered to come and experience the exhibit, add to it, be a part of it,” said Tracy Bear, special adviser to the provost on Aboriginal initiatives, who served on the committee that brought the exhibit to the U of A for its premiere showing.

“When I first heard about the project, I thought the U of A would be the perfect host for it, and I was right; Edmonton has a really strong community,” said Bear. “The Office of the Provost has always been a strong supporter of Aboriginal initiatives on campus, and we couldn’t have done it without them.”

The work exists as a floor installation made up of beaded vamps (moccasin tops or “uppers”) arranged in a winding path formation on fabric and includes cedar boughs. Viewers remove their shoes to walk on a path of cloth alongside the vamps. Each pair of vamps represents one missing or murdered Aboriginal woman. The unfinished moccasins represent the unfinished lives of the women whose lives were cut short.

Originally, the project, organized by Christi Belcourt in Ontario, called for 600 pairs of vamps. Bear says as the deadline for submissions neared, the exhibit was still 200 pairs short.

“Christi would tell me, ‘I don’t think we’re going to make it but it will still be beautiful,’” remembered Bear. “Then, as the deadline loomed, there was a huge outpouring of support. Christi became good friends with the person at the post office. She says it was a moving experience.”

All told, 1,726 vamps made their way to Edmonton, a number of which came by way of a weekly beading circle last semester that was organized by the Aboriginal Student Council. “That’s where I started mine too,” said Bear. “That created a community in itself.”

In readying the exhibit, one of the duties was to affix a piece of Velcro to each vamp. Led by local elders, a small group met three times to complete the monumental task, which Bear says really drove home the importance of this exhibit for her.

“One of the things about community, let’s say when you are creating a feast together, you’re in the kitchen with a bunch of women, there’s laughter, tears, all sorts of things—there’s a real bonding that happens,” she said. “The same thing happened when we were putting Velcro on the bottom of the vamps. There was a real sense of a growing community, a sense of love amidst the sorrow and sadness we all felt—but there was hope.”