That is what this country is, for all of us, for me and for you. We cannot look upon one another with suspicion, derision, animosity or fear. We cannot let it change what we are, corrupt us or rob us of our everyday.

Samantha Nutt tells grads to remember who they are and see the extraordinary in every ordinary day. 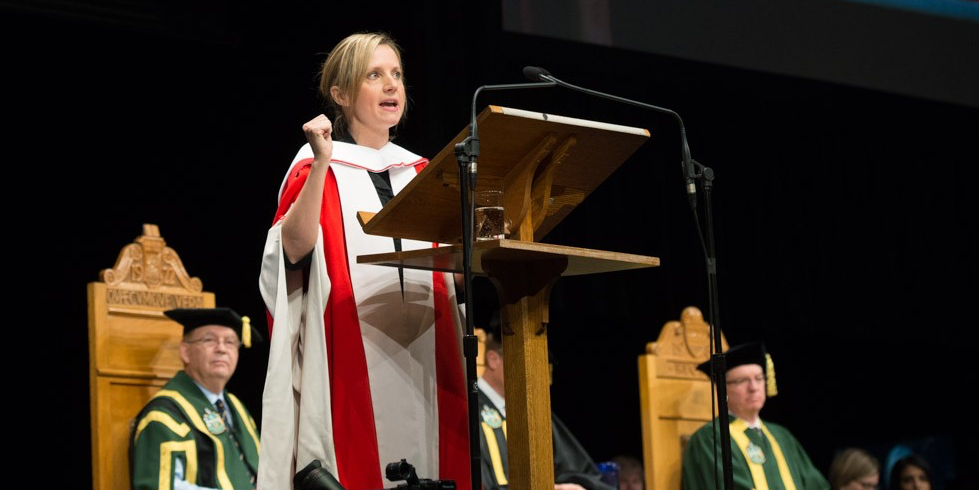 In the face of terrorism that tore Paris apart last week, University of Alberta graduates and all Canadians must remember who they are and celebrate their humanity, says a leading humanitarian.

“If I can offer any lessons from my life—a life which has on at least a couple of occasions very nearly been extinguished by war and in which far too many of my friends were lost to days like no other day—it would be these: Remember who you are. Remember where you come from, the essence of which is all around you here today. And remember to never, ever hesitate to show those you love how much you truly mean it,” said Samantha Nutt, founder and executive director of War Child Canada/War Child USA.

Nutt, a leading authority on current affairs, international aid and foreign policy, as well as public speaker and bestselling author, was awarded an honorary doctor of science degree by the U of A Nov. 18. Her career has focused on providing assistance to war-affected women and children in dozens of conflict zones. Her 2011 book, Damned Nations: Greed, Guns, Armies and Aid, was a national bestseller and tells of Nutt’s humanitarian work in some of the globe’s most devastated regions. She is also a family physician at Women’s College Hospital in Toronto and an assistant professor of medicine at the University of Toronto.

Her acceptance speech, in light of the Paris attacks, was not the one “I thought I’d be giving today,” she told graduates of the faculties of medicine and dentistry, nursing, pharmacy and pharmaceutical sciences, rehabilitation medicine, public health and science.

While acknowledging that all of their hard work in earning degrees has indeed been worth it, Nutt admitted to the new graduates that she isn’t sure what kind of world they are inheriting.

“It is impossible to reflect on the events of the past five days and not feel changed, forced from our chrysalis. Exposed and vulnerable. Sad. Because we all deserve something better, gentler and more beautiful. Not 129 people dead in the City of Light and philosophy and love and poetry.”

The list of places in the world scarred by terrorism is long, including New York, Madrid, Mumbai, Beirut, Boston and Baghdad, and while people grieve and then rebuild, “nothing is ever the same,” Nutt noted. “As human beings, we need the comfort of the familiar; we need those banalities of life. We need to go to work and school and rock shows and restaurants and markets and not wonder, will these be my last minutes on Earth? That comfort, that familiarity, is like a white noise that we don’t hear until the moment it is abruptly shut off: Its presence is marked most acutely by its absence. And in the aftermath of tragedies such as these, everything is loud. Too loud. We can’t focus or concentrate. This is terrorism.”

And though it is tempting to give in to fear and mistrust, to become hardened, Nutt urged her audience to stay true to who they are as Canadians. “We are a country of new beginnings. We are a respite for the war-weary, the vulnerable and the oppressed.” Her own parents came to Canada to live a better life, and “everyone and everything I love is the product of that optimism,” Nutt said. “That is what this country is, for all of us, for me and for you. We cannot look upon one another with suspicion, derision, animosity or fear. We cannot let it change what we are, corrupt us or rob us of our every day.”

And although the tools to fight terrorism can mean closing minds as well as borders, Nutt noted that “too often, the very weapons we deploy to defeat terrorism become its accelerant. There are no easy answers and no guarantees,” she said. “But as these conversations take place in the coming weeks and months, let’s aspire to move forward and live every day as if it were extraordinary for simply being ordinary. That’s what we all want. That’s what those living with the horror and heartbreak of war want: just a normal day.”