Was John Lennon’s “Imagine” inspired by an Alberta Cree grandmother?

A 1969 phone conversation between the legendary songwriter and a local Indigenous activist points to song’s possible origin. 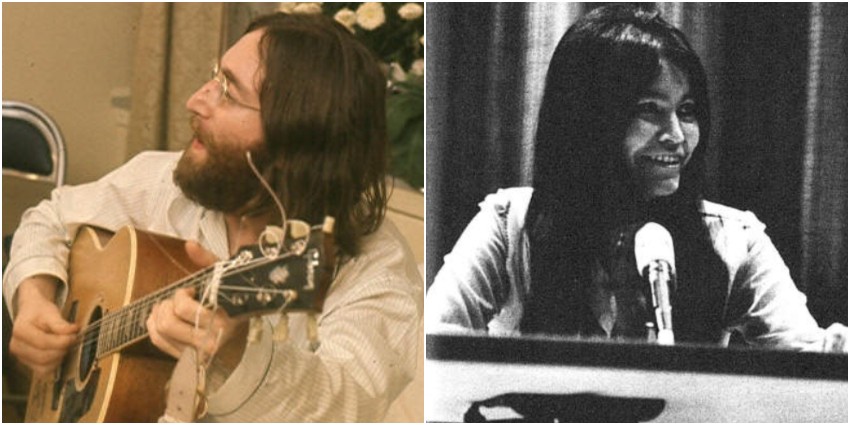 (From left) John Lennon at a bed-in protest in 1969; Lillian Shirt speaking at the U of A in September 1969. A phone conversation between the two may have partly inspired Lennon's iconic peace anthem "Imagine." (Photos: Lennon: Wikimedia Commons; Shirt: The Gateway)

It was shortly after Lillian Piché Shirt pitched her tipi in Edmonton’s Winston Churchill Square to protest insufficient Indigenous housing in 1969 that a man approached to say there was an urgent phone call waiting for her at a local radio station.

When she arrived at CJCA, she was told John Lennon was on the line. He’d seen newspaper coverage of her protest during his famous Montreal bed-in peace demonstration with Yoko Ono and wanted to learn more.

“If you had said Dag Hammarskjold (second secretary general of the United Nations), I would have understood, or Martin Luther King. But John Lennon? This didn’t ring a bell with me,” recalled Shirt.

As Shirt remembers it, Lennon told her he wanted to support her cause, asking if there was a message she’d like him to convey to the world. She thought of the Cree words her grandmother often recited to her: “Keespin esa Kasakehetoyah, Kasetos-katoyah, Kawechehetoyah, Namoya Ka-no-tin-to-nanhoyo.”

The phrase translates as, ‘Imagine that if, there was no hate, if we loved each other, we loved one another, that there would be no war between us.’”

Lennon was moved and asked if he could use it, recalled Shirt.

“Sure, go ahead,” she replied. At one point in the discussion, she remembers Yoko Ono chiming in to say, “You look like me,” perhaps referring to a newspaper photo she’d seen.

Shirt also recalls Lennon mentioning he wrote down that Cree vision of peace on the closest thing to hand—a pillowcase.

Two years later, Lennon famously composed “Imagine” on his white Steinway piano at his Tittenhurst Park estate in Ascot, Berkshire, England. Before his death in 1980, however, he never did credit Shirt with inspiration for the song.

'I think it all fits together'

Shirt’s 1969 conversation with Lennon finally came to light in 2016 when Indigenous scholar Corinne George gave a conference paper at the University of Alberta on research she’d done for her master’s thesis in 2006 on local Indigenous activists. That research included an interview in which Shirt recounted the story.

"At first I couldn't believe what I was hearing,” said George, now regional principal for the College of New Caledonia’s Burns Lake campus in B.C.

"But there is no doubt in my mind" that the conversation took place, she said, adding that Shirt’s memory was “vivid” and “she was very specific about the way these circumstances unfolded."

George said she found it amusing that Shirt had never heard Lennon’s name before talking to him.

“At that time, Aboriginal cultures may not have been that connected to what we call pop culture today," she said.

George’s supervisor, U of A historian and professor of native studies Sarah Carter, thought the story deserved further exploration, so she set about searching for corroborating detail.

She discovered that Shirt’s tipi protest had indeed received wide television, radio and newspaper coverage during the time Lennon and Ono were in Montreal. In fact, Lennon wrote and recorded “Give Peace a Chance” on June 1, 1969, and the following day an article appeared in the Montreal Gazette with the headline, “Cree woman believes injustice in housing—pitches a teepee.”

“It just enhanced the likeliness that (Lennon and Ono) would have seen this in their bed-in,” said Carter. “I think it all fits together."

Most interesting of all, she added, were visual clues in the original video for “Imagine,” in which Ono dressed like a Native woman, “and Lennon is dressed as a sort of cowboy/frontiersman.”

Just before Lennon enters their Berkshire mansion, it appears he is wearing mukluks, “a decidedly Indigenous Canadian touch,” said Carter.

In 2016, Carter pulled all of this research together in an article with a joint byline carrying the names of Shirt, George and herself on ActiveHistory.ca. The following year, Edmonton’s Avenue Magazine published a biographical profile on Shirt, citing the Lennon incident.

Avenue tried to find the original radio tapes, but they no longer exist. And their attempts to reach Yoko Ono were unsuccessful. But Carter is convinced the conversation between Shirt and Lennon did take place.

"There's no doubt that she spoke to John Lennon, and that he was very interested. There's also no doubt that she told the story of her grandmother, and imagine is definitely in that. But whether this actually inspired him is open to interpretation."

It wasn’t until last year that Yoko Ono was herself finally given songwriting credit for “Imagine” by the National Music Publishers Association. Lennon admitted in a 1980 interview that Ono’s book Grapefruit (containing a number of phrases starting with the word “imagine”) was partly responsible for inspiring the song.

He said failing to acknowledge her contribution to a number of his songs was the result of “selfish” behaviour on his part.

“I know she helped on a lot of the lyrics, but I wasn't man enough to let her have credit for it,” Lennon confessed.

Shirt, meanwhile, became one of the leading Indigenous activists of her time. After her protest at Churchill Square, she pitched her tipi on the Alberta Legislature grounds. A confrontation with police dogs resulted in the beginnings of a provincial plan for welfare housing, writes Carter in her 2017 article.

Shirt went on to establish the Alberta Native Peoples Defense Fund and championed Native rights and Cree education throughout her life. In recent years she championed the welfare and education of Indigenous mothers and children, helping to organize the Sacred Circle program at Prince Charles School in Edmonton, where elementary students receive Cree language instruction. She died in 2017 at the age of 74.

“Lillian helped to found the organization Indian Rights for Indian Women, which fought for decades for equal rights for First Nations women to end discrimination under the Indian Act,” said Carter.

As for the vision of peace passed down by Shirt’s grandmother, one can only wonder if it left a lasting impression on Lennon. In the end it may not have inspired him at all.

But imagine if it did.

"I do believe Lillian's story,” said Carter. “It's a neat thing to ponder, and that may be where we have to leave it."

Was John Lennon’s “Imagine” inspired by an Alberta Cree grandmother?