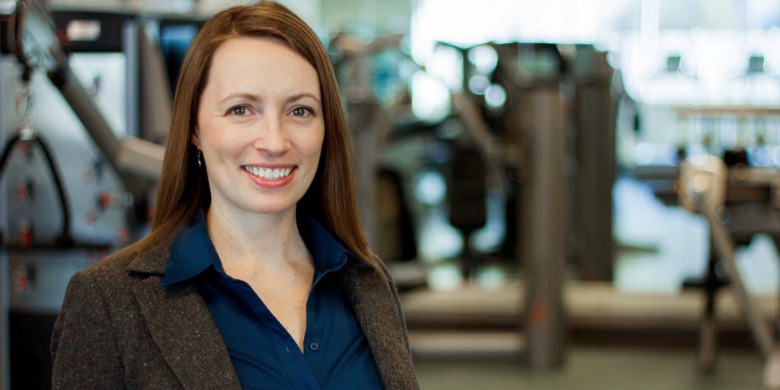 130716-margie-davenport-banner
Margie Davenport led a study showing that excess weight gain early in pregnancy can lead to larger babies who may be at higher risk of developing into overweight kids and adults.

(Edmonton) Moms-to-be who gain too much weight early into their pregnancy are nearly three times as likely to give birth to bigger and fatter babies, warns a University of Alberta researcher.

A study of 172 expectant mothers found that women who gained excessive weight during the first half of pregnancy gave birth to heavier and longer babies with more body fat than babies of women who either did not gain as much weight or put it on later in their pregnancy.

The results underscore the need to educate expectant mothers about the dangers of early weight gain during pregnancy and importance of healthy eating and exercise, said lead author Margie Davenport, an assistant professor in the Faculty of Physical Education and Recreation.

“Expectant mothers and health professionals need to be aware of pregnancy weight-gain guidelines and follow them to build a foundation for a healthy pregnancy and healthy baby,” said Davenport.

The study included data from 172 healthy, expectant mothers living in London, Ont., between 1995 and 2011. The women were non-smokers with a body mass index of at least 18.5 when they were between 16 and 20 weeks pregnant. A BMI below 18.5 is considered too thin; anything above 25 is considered overweight.

All women in the study were encouraged to follow a basic exercise program of three to four aerobic workouts a week. They also had access to eating guidelines to promote healthy weight gain during pregnancy.

Maternal weight gain was scored against the 2009 Institute for Medicine guidelines for pregnancy, comparing data with their pre-pregnancy BMI.

“Healthy eating and physical activity when pregnant have long-lasting benefits to mother and child,” Davenport said. “Infants who are larger at birth tend to become larger children, and that creates a risk for developing into obese and overweight children and adults.”

Sarah O’Hara knows the dangers of gaining too much weight too quickly, both as a new mom and a registered dietitian who specializes in obstetrics. One of the key challenges to ensuring expectant mothers eat properly is overcoming the old saying “eating for two,” she said.

“For many mothers, eating for two is taken too literally. People feel like they’ve been given an allowance to eat whatever they want, and that can lead to weight gain,” said O’Hara, a U of A alum.

During her own pregnancy she closely monitored her weight, stayed active and followed the Canada Food Guide, adding additional servings later in the pregnancy and eating extra dairy and protein, and limiting caffeine.

Staying active hasn’t been a challenge for Carolyn Terry, who is seven months pregnant. A yoga instructor and U of A alum in kinesiology, Terry said expectant moms like her can maintain their physical activity levels, although some modification may be required.

“You have to work at your own level and listen to your body,” she said.

U of A a leader in obesity, pregnancy research

Davenport started the study as a PhD student of U of A alum Michelle Mottola at the University of Western Ontario and continued the research through a post-doctoral fellowship, finishing the work after her arrival at the U of A last January. A key draw for coming to the U of A was the opportunity to work alongside leading researchers in obesity and pregnancy, she said, with her research program, the Center for Pregnancy and Postpartum Health, affiliated with the Physical Activity and Diabetes Laboratory and Alberta Diabetes Institute.

Davenport said she will follow up this research by exploring how interventions earlier in pregnancy, such as lifestyle changes to diet and exercise, can improve the long-term health of mother and infant.

The study was published July 9 in the peer-reviewed journal Obstetrics & Gynecology and was funded by the Canadian Institutes of Health Research and the Heart and Stroke Foundation of Canada.