Welcome to 'the real world of us' 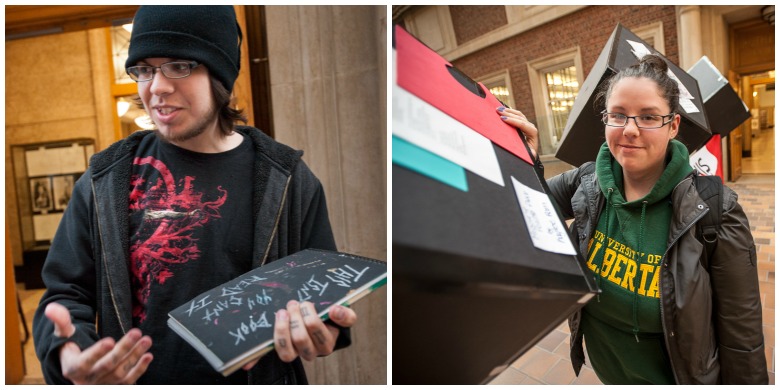 (Edmonton) A tattered scrapbook lies on a coffee table in the Rutherford Library Atrium, filled with a whimsical mash-up of written personal reflections, fun pop-culture postcards and poignant statistics on Aboriginal suicide rates. There’s also lots of room to add your own thoughts, and that’s just what University of Alberta student Anthony Muller hopes for.

The “real, raw, everyday” journal created by Muller is one of the provocative pieces featured in Peanut Butter and Drymeat Sandwiches, an eclectic exhibit of visual art, reflective writing, poetry, video and audio work that explores the first-year experience at the U of A through the minds and hearts of Aboriginal students.

Muller, of Bigstone Cree and Métis background, says he “loves dialogue,” which is why he wants people to share their thoughts in his notebook. “It ushers in a greater sense of community,” something he feels needs to be strengthened on campus.

“It seems to be institutionalized; I hope to add a bit of humanity and break some barriers about Aboriginal people. This invites people into the real world of us.”

Muller is one of the students on campus for the first time, launching his academic journey through the U of A’s Transition Year Program (TYP). The program introduces Aboriginal students to university and prepares them to go on to chosen studies in any of nine faculties.

The exhibit, which runs from April 12 to May 15 at Rutherford, caps off a class taught by Keavy Martin and Christine Stewart in the Department of English and Film Studies, called Indigenizing the Academy. The idea is to think more deeply about the role of indigenous knowledge on campus, said Martin, an assistant professor in English and film studies and an adjunct professor in the U of A Faculty of Native Studies.

“We are trying to turn the whole idea of education on its head. There is a real diversity from these students; they come from different backgrounds and places. We wanted to rethink the idea of ‘transition’ as it applies to TYP. Instead of the students having to simply adapt themselves to the U of A, we wanted them to act as agents of decolonization and to embrace the idea that they bring something very important to this place,” Martin said.

It would be easy to assume that Aboriginal students new to the university environment “operate on a knowledge deficit,” but that would be untrue, Martin added. “I have found my work teaching in TYP to be the most important work I am doing, because it has taught me the most. These students have so much to say—they get me thinking harder than any conference I go to.”

Through the exhibit, about 30 students are sharing their perspectives on their first year on campus.

“It is an opportunity to share their ideas about transforming space, to imagine how the university could be different, and to communicate their perspectives on issues that are important to them,” Martin said.

Throughout the term, the class discussed the U of A’s hopes for its Aboriginal students and the university’s commitment to creating space for them in its programs. “There is lots of that happening on campus, so in some cases students offer suggestions for how those promises could be improved and better fulfilled,” Martin noted.

TYP student Krista Chiponski took that idea to heart, walking the campus to evaluate five main buildings for indigenous content. She found a sundial medicine wheel on the floor of the Centennial Centre for Interdisciplinary Science, murals in the Rutherford Library and displays in Pembina Hall (home to the Faculty of Native Studies), but feels there is room for more.

“HUB has the shape of a longhouse and an assortment of food outlets; why not offer bannock? Or maybe a plaque for some of the buildings, paying homage to the treaty land that the university is on.”

Chiponski, who is Métis, felt empowered by the class project. “We want to make a difference on campus and to let other students know we want to share our culture and be a part of the university. For me it has opened a lot of doors and given me a community to look to.”

Martin and her students hope that viewers come away from the exhibit with “a greater awareness of the experience indigenous students have on campus—not only how diverse but also how challenging it can be. They hope that people remember the territory they are in, and that part of their work here is to have a relationship with indigenous people.”

Welcome to 'the real world of us'