What I did last summer: Nursing in Nepal 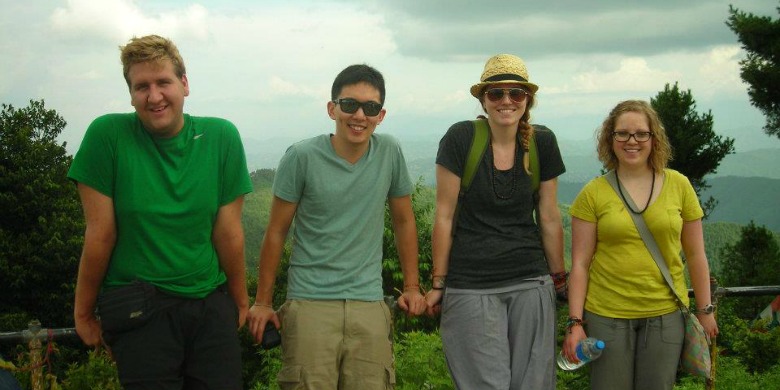 (Edmonton) Being isolated in a remote outpost caring for the sick in sweltering heat might not be everyone’s recipe for a summer vacation. But for four University of Alberta nursing students, it was part of a remarkable—and rewarding—learning experience.

Ross Ballantyne, 22; Sarah Colvin, 26; Eric Dang, 23; and Maggie Danko, 22, spent three and a half weeks of their summer nursing in hospital and remote clinic settings in Nepal. The self-planned volunteer excursion put the foursome’s U of A training to good use, and helped them gain hands-on patient care experience with local practices and traditions.

“The capacity that the nurses have there is completely amazing,” said Ballantyne, the global health representative for the Nursing Undergraduate Association (NUA) in the Faculty of Nursing. “When a patient comes in for treatment, the nurses know everything about them and they ensure a patient’s general health is looked after—providing health care as opposed to just sick care. The entire experience was very beneficial for us.”

Planning for the trip started when Colvin started researching opportunities for volunteer travel overseas. The third-year nursing student and NUA president said she’d always had a “need” to tour Nepal—a desire she mentioned to her colleagues late last year.

“I had been Googling volunteer holidays because I always felt like I wanted to give back in some sense. Then I found out you could actually do nursing, and travel internationally, and go sightseeing in Nepal, so that was it,” she said.

Danko, a fourth-year student and president of the Canadian Nursing Students’ Association, was on board after previously nursing as a volunteer in India. Ballantyne had travelled to Colombia, Ecuador, Nicaragua and other Central American countries.

The students made their own arrangements through a third-party agency, leaving Canada not knowing where in Nepal they would actually end up nursing. When they landed and made their way to Nepal’s Chitwan District, the heat was oppressive—56 C with 90 per cent humidity.

“You got off the bus and felt almost like you hit a wall,” Danko said.

After some sightseeing, a brief orientation and language classes, Colvin and Danko were assigned to nurse in a family-planning clinic and in Scheer Memorial Hospital in Banepa, a rural community on the outskirts of Kathmandu. In the hospital, they worked in obstetrics/gynecology and emergency—the latter introducing the pair to numerous accidents involving motorbikes, the main mode of transport.

They also saw how care teams handle psychiatric patients, particularly young women who have attempted suicide or have been poisoned. One patient even feigned poisoning and comatose symptoms to get her family’s attention, said Danko, calling it an eye-opening experience. “There’s a lot of family pressures on girls around arranged marriages and having children very young,” she explained.

The men found themselves posted in a community clinic in Padam Pokhari, which Dang described as a typical village: remote, hot, lots of bugs and little access to technology—“minus the one computer,” he said. It was a 90-minute walk each way (or a 25-minute bike ride) just to reach the clinic, where the bulk of the work involved applying dressings to wounds.

Despite language barriers where the local medical officers didn’t speak English, the pair did their best to keep up and help as many people as possible. They encountered some interesting cases along the way.

“We saw a worm in someone’s knuckle. I didn’t even think that could happen,” said Ballantyne of parasite extractions, a common procedure in Padam Pokhari. “You would never see that here.”

In the face of the challenges of working thousands of kilometres from home, and in less sophisticated clinical settings, the foursome came away with something far more valuable than a summer vacation, full of learning and discovery that each will cherish.

“There are no words that can describe it—the experience, the people, the culture, the food,” Colvin said. “I can’t do the people or the country justice. We wanted to change Nepal, but Nepal changed us.”

What I did last summer: Nursing in Nepal
Newsroom