What lies beneath the surface: examining water-borne parasites 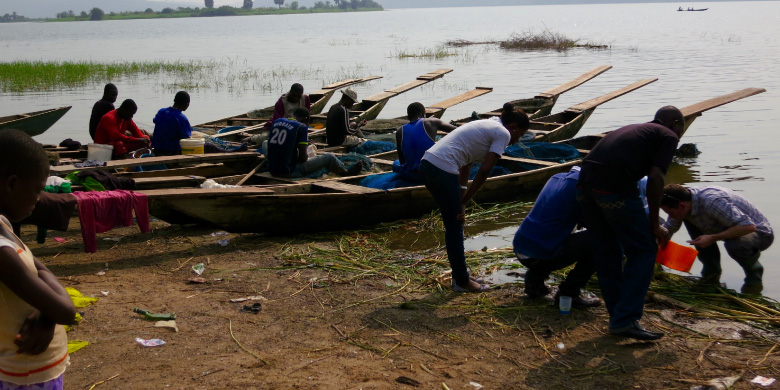 (Edmonton) Water is essential for life on Earth. It is crucial for environmental and human health, necessary for food and energy security, and indispensable for continued urbanization and industry. One in nine people lacks access to safe water, but what does this mean?

We often think about getting sick from drinking unsafe water, but what lives in the water can also affect our health. For eight years, University of Alberta researcher Patrick Hanington has been studying parasites that infest water and affect human and animal health locally and internationally.

Hanington’s research focuses on schistosomiasis. It is one of the world’s widely neglected diseases, yet it is second only to malaria in terms of overall public health impact for parasitic diseases. The disease is caused by parasitic worms called schistosomes that live in specific species of freshwater snails. Infected snails release cercariae, the form of the parasite infectious to humans. When released, the cercariae look for a host and are attracted to human secretions. If people are in nearby water, the cercariae can penetrate through the skin, causing infection.

“In Canada, the schistosomes that lead to human disease are absent. However, similar parasites that naturally infect other animals can be found within resident snails. Cercariae released from these snails can encounter people in the water, causing what is commonly known as swimmer’s itch. The result is a temporary, itchy rash, which eventually goes away within two to five days,” says Hanington, assistant professor with the School of Public Health. “But in tropical, developing countries where good sanitation is often lacking, three species of schistosome exist that specify in infecting humans. These parasites lead to much more serious health complications.”

To further explore schistosomiasis internationally, Hanington is collaborating with William Anyan, a researcher at the Noguchi Memorial Institute for Medical Research at the University of Ghana. Together, they are building on their combined expertise in the snail stage of the schistosome life cycle. They plan to integrate their research with existing chemotherapy-based control programs in small rural communities in Ghana.

“Local people are in the water every day, whether they are using it for fishing, cleaning, drinking, playing or bathing,” explains Hanington. “Avoiding interactions with water to prevent schistosomiasis is not reasonable. We’ve had to ask ourselves, ‘What can we do to work both with the community and with the environment to improve health and reduce the burden of schistosomiasis?’”

Hanington and his team are developing tools to estimate the risk of schistosome transmission from snails. They are also evaluating the snail and schistosome population structures. If they are able to understand the rate of transmission and how quickly the schistosomes are reinfecting both people and snails, then they will be better able to tailor control strategies to prevent new infections, avoid reinfection and assist those currently infected.

Ultimately, the objective is to complement drug administration programs by providing tools for measuring treatment effectiveness and reducing schistosome prevalence in both snails and people.

Hanington says that his research in Ghana has just scratched the surface, and he is looking forward to further discovery.

As part of ongoing efforts to build closer relationships with communities and researchers, Anyan was recently invited to the School of Public Health.

“Health knows no boundaries,” says Hanington. “The more we can collaborate on a common issue, exchange knowledge and assist one another, the more likely we are to have a significant health impact and alleviate human suffering.”

What lies beneath the surface: examining water-borne parasites