What makes a great dad during pregnancy? 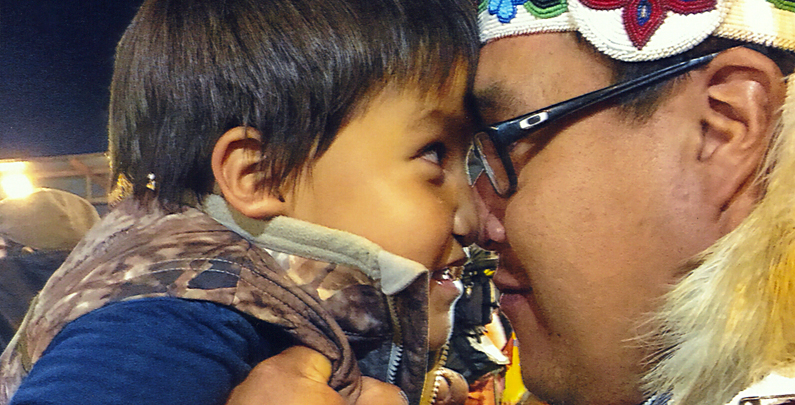 A moment of parenting on display by a research subject. (Supplied photo)

Strong family support and having a sense of community were the two most important factors that helped Cree fathers positively impact pregnancy, according to a new UAlberta study.

The findings have cross-cultural implications for what men need in order to impact pregnancy and embrace fatherhood in positive ways, as well as point to the need to improve the system to better include men of all cultures, according to Richard Oster, UAlberta research coordinator and one of the paper’s investigators.

“These are two inspirational and universal takeaways for fatherhood,” said Oster.

The study was carried out in partnership with the Cree communities of Maskwacis, Alberta, and included interviews and photovoice—a technique where participants express thoughts and feelings by talking through a moment featured in a photograph that is meaningful to them.

“The Indigenous Elders involved in our study felt that exploring what makes an outstanding father in their community would help other men reclaim their role as supportive partners during pregnancy,” said Oster, who works out of U of A’s Li Ka Shing Centre for Health Research Innovation.

Family support and sense of community

The study participants all indicated they felt they could be supportive partners during pregnancy because they felt supported by family.

“Our participants found a lot of support from their culture and spirituality. With that solid foundation in place, it gave them a strong sense of who they are and how to move forward in the world with confidence.”

Becoming a father is a big change in a man’s life.

There’s good health evidence as to why fathers need to be more supportive during pregnancy, said Richard Oster, a research coordinator with UAlberta’s ENRICH research program. “Research shows the pregnancies that have a partner involved have lower risk for adverse outcomes.”

“Some people view it as a loss of autonomy but with family and community in place, it’s possible to look at it right away as an opportunity to make positive changes in your life,” said Oster.

Fathers said they supported partners during pregnancy by doing more household and family chores, childcare, driving, decision making, appointment reminders, and heavy lifting “all to make it easier for her.”

The fathers also viewed attending prenatal appointments when they could as imperative to supporting the mothers, in addition to educating themselves on what a healthy pregnancy means and being prepared for raising a child.

Another important message is that there is a need to include men in the clinical appointments and prenatal and perinatal programming for Indigenous men and men in general, said Oster.

Study participants explained how they felt alienated during perinatal experiences. “Men tend to be excluded from the health-care system throughout the entire pregnancy,” said Oster, citing that mother-centric prenatal classes could be shifted to leverage support from fathers.

Grant Bruno, the graduate student and Maskwacis community member who helped collect and analyze much of this data said, “healthy pregnancy includes an engaged father who knows their role as the primary support for the woman.”

Men in this study also said that they would not have been able to be supportive unless they also felt supported, added Oster. He recalled how isolating and frustrating it was to him personally not be able to stay overnight with his wife after she gave birth to their daughter eight years ago. “For me that was tough because I wanted to bond with my child and wife.”

This study is one of many under UAlberta’s ENRICH research program looking at how to support healthy pregnancy across diverse groups of women.

What makes a great dad during pregnancy?
Newsroom