What happened a century ago shapes our understanding of the flu to this day. 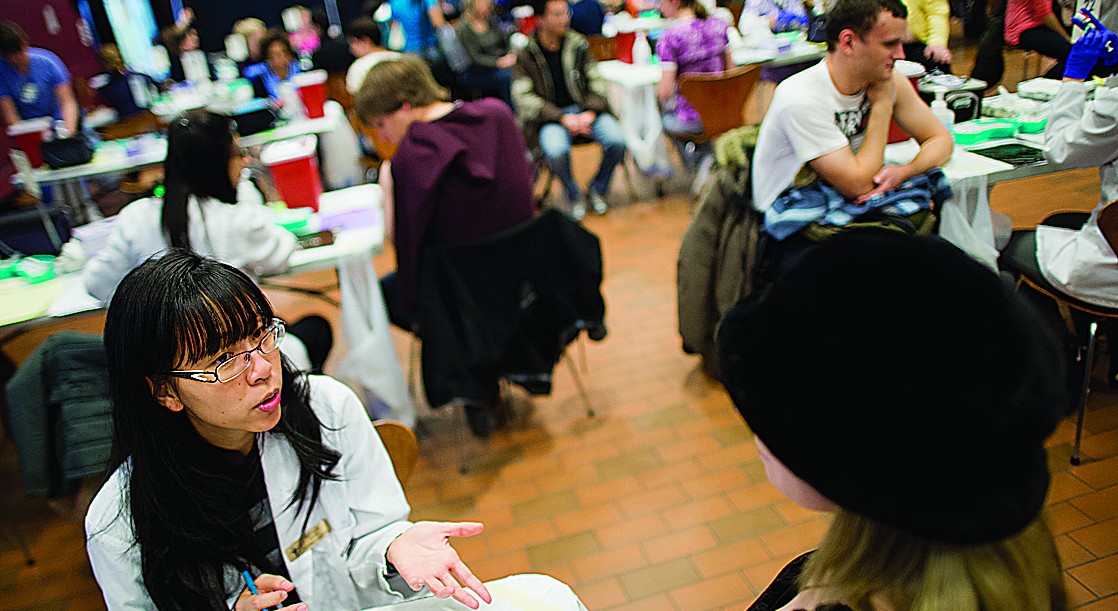 The 2005 discovery that the 1918 influenza was an ancestor of the H1N1 flu was pivotal in the development of an H1N1 vaccine in just four months after a global outbreak of the virus in 2009.

One hundred years ago this month, the so-called Spanish flu swept across the globe infecting a third of the world’s population and claiming somewhere between 50 and 100 million lives, far more than were killed in the First World War.

It took almost a century to reveal the secrets of one of history’s most deadly influenza pandemics, according to Stephanie Yanow of the University of Alberta’s School of Public Health.

In its immediate aftermath, the unprecedented health crisis gave rise to many of the protocols Canada uses in responding to pandemics to this day, while the virus itself eventually provided an invaluable key to modern strains of the disease.

The First World War provided the perfect conditions for the flu pandemic to spread—exhausted soldiers sick with other infections in trenches, crowded military camps, boats carrying fresh troops to the front and returning with the infected, said Yanow.

At the end of the war, huge numbers of soldiers returned home, many bringing the virus with them. In Canada, the pandemic quickly spread west, devastating communities amidst a severe shortage of doctors. All told, 50,000 died in Canada, 4,000 in Alberta.

At the U of A, the second wave of the pandemic (the first arriving in spring) hit just as students were starting a new term, many having just returned home from the front. By October, the university was “disbanded” to treat the ill and prevent further infection, said U of A historian Sarah Carter.

Pembina Hall, then a women’s residence, was transformed into an emergency hospital, and by November, 70 people had died of the flu. Among them were students, staff, volunteers and one of university’s first four professors—William Muir Edwards, who succumbed caring for the ill.

One of the reasons the pandemic was so deadly, said Yanow, was that the virus was completely new. Humans had no immunity to it.

"This was one of our first experiences of a disease on such a global scale, especially in the context of the war and this massive movement of populations carrying disease to all of these far-flung places,” said Yanow in a School of Public Health lecture last week.

The pandemic baffled physicians because—unlike seasonal flu, which is most dangerous for the very young and elderly—it proved most fatal for those between 20 and 40, she said.

It also moved rapidly through the body, in some cases within 24 hours from first symptoms to death, and most victims died of pneumonia, a secondary infection attacking the lungs after they were weakened by the virus. Antibiotics might have helped, but they had yet to be discovered.

Everyone was caught off guard in a patchwork, disorganized health care system, said Yanow.

Vincent Massey introduced a scathing critique of the Canadian response to the disease in Parliament in the fall of 1918, which led to the creation of the federal Department of Health, along with the first draft of Canada’s pandemic plan.

That document included “five of the core pillars of a public health response we have today”—ensuring a uniform and coordinated response, issuing warnings, circulating evidence-based information and monitoring the disease while compiling statistics and tracking the pandemic’s pattern of movement across the country, said Yanow.

What is less widely known is that the 1918 pandemic would continue to shape our understanding of influenza throughout the 20th century and into the 21st, she said.

To start with, viruses had not yet been discovered at the time of the outbreak, but by 1931 the influenza virus was identified and could be cultured in a lab. By the 1950s, an animal model was developed to study the disease in a biological setting, said Yanow.

“There was keen interest to recover samples of the virus from people who died in 1918 and try to wake it up and put it in animals,” she said.

On a quest for those live samples, a research team from the University of Iowa under Johan Hulton discovered a grave site in Alaska that held much promise. Preserved in permafrost were the frozen bodies of 78 Spanish flu victims.

The team exhumed the bodies, removed tissue samples from the lungs and returned to the lab. But they failed to revive the virus.

Forty years later, advances in genetic sequencing presented another opportunity to decode the Spanish flu, and an aging Hulton was back on the trail.

"Dr. Hulton had retired but went back to Alaska on his own dime, and from one corpse got a tissue sample he sent to colleagues doing sequencing,” said Yanow.

"Now scientists didn't need to wake up the virus and have it grow; they just needed to get a bit of its genetic information to run through a sequencer,” said Yanow. “They just needed it to be intact."

By 2005 scientists had sequenced the 1918 influenza, realizing it was an H1N1 strain, an ancestor of the H1N1 flu that emerged globally in 2009. Understanding its genetic code allowed scientists to develop a vaccine for the 2009 strain within four months and to come up with better diagnostics for influenza in general.

But along with these modern scientific advances, the public response in 2009 included “tried and true” measures first devised in 1918, said Yanow, such as limiting public exposure, school closures, and promoting hand washing and hygiene.

Does all of this mean we are ready for the next big pandemic? Not necessarily, said Yanow, as it could stem from a quickly evolving pathogen that evades attempts to create a vaccine, or from an entirely new origin.

Or it may come from a part of the world that is less able to respond to an outbreak according to the protocols of 1918.

“If we don't understand the diversity in the pathogens, we won't be prepared for something new that comes our way,” said Yanow, arguing that coordinated, well-funded research into pathogens across the globe is necessary to stop a pandemic.

"Often it's in the weaker health systems where a pathogen can gain a foothold, go unnoticed and, with globalization, can spread around the world in a matter of days, possibly with one flight on an airplane," she said.

The next outbreak may also cross over from another species, one in which we haven’t yet encountered a disease connection.

“We can't focus only on what's happening in the human population,” said Yanow. “Our interaction with the world is growing, whether in the food chain or how we interact with the environment, so we need to undertake an approach that considers all three—animal, human and the environment."