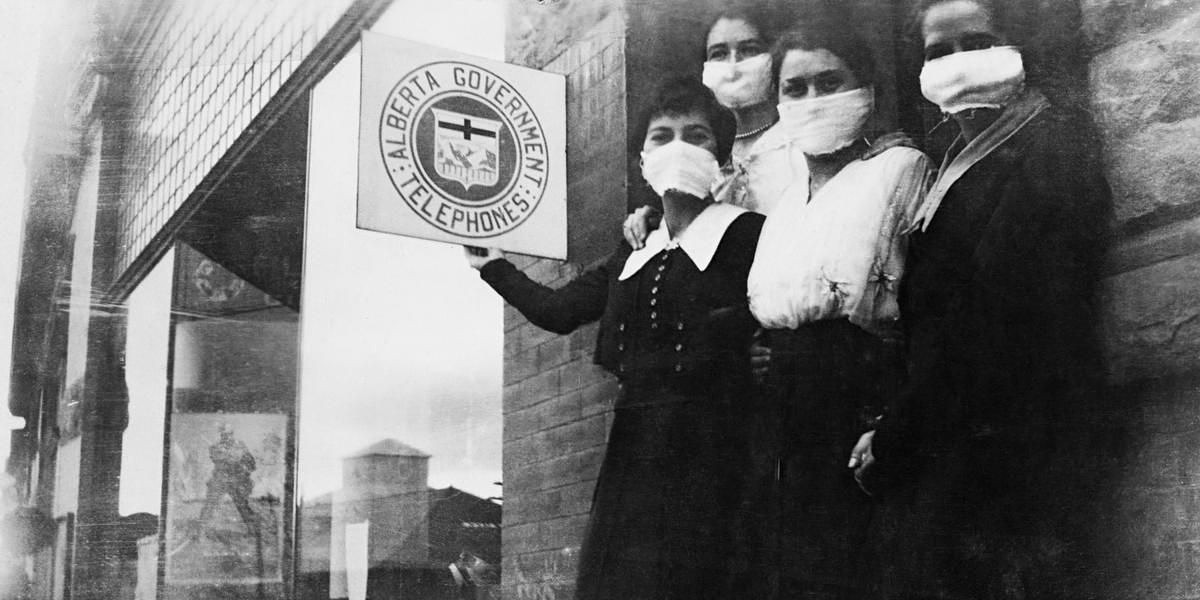 Alberta Government Telephones operators in High River wear masks during the 1918 Spanish flu pandemic. Many of Canada's pandemic protocols were established in the wake of the Spanish flu, according to a U of A public health expert. (Photo: Glenbow Archives NA-3452-2)

It’s easy to feel trapped in the present by COVID-19—stuck at home, preoccupied with fears of what’s to come.

But as history reminds us, it’s not the first time we’ve lived through a pandemic, and it can be instructive to look to the past for guidance.

Previous pandemics, such as the Spanish flu of 1918, produced strikingly similar shades of panic, political opportunism, racism, xenophobia and debates around public health versus the economy, according to University of Alberta historian Susan Smith.

Serious outbreaks also had the power to make or break political leaders. She said successful politicians did not deny or delay. They conveyed accurate, timely information.

“In the U.S. during the 1918 flu, those cities with good leadership, like Milwaukee, Wisconsin, had much lower rates of disease,” said Smith.

Milwaukee recorded just over 291 excess deaths per 100,000 people, half that of many other cities including Denver, Pittsburgh, San Francisco and Boston.

“Those who put their heads in the sand, working against public health needs—that's where you see some of the worst problems.”

The Spanish flu infected a third of the world’s population, claiming somewhere between 50 and 100 million lives, far more than were killed in the First World War.

An outbreak of bubonic plague in San Francisco’s Chinatown at the turn of the 20th century provides a stark example of poor leadership. It took two years for the governor of the day, Henry Gage, to admit the plague’s existence for fear it would hurt the economy. It took four years to stamp out the disease, after the governor was voted out of office for not taking it seriously.

“The historical lesson is that when leaders use strong-arm tactics or conflicting, mixed messages, or provide only limited information, the citizens are reluctant to follow along.

“Good public co-operation was based on a clear government and public health message with frequent and honest communications,” said Smith.

The plague also demonstrated how racism and xenophobia tend to accompany epidemics. Since it was believed to be a Chinese disease, Chinatown was quarantined, but Caucasian citizens were free to come and go.

“There had been this whole anti-Chinese movement since the late 1800s, so it fits into existing patterns of discrimination,” said Smith.

During the 1918 flu, Indigenous populations around the world were hit harder than most, she added. The mortality rate among Indigenous groups in Australia, New Zealand, Canada and the United States was four times as high as that of white urban populations because of poverty and lack of access to fresh water and sanitation.

In Labrador, the flu killed close to one-third of the Inuit population and forced some communities out of existence.

Attempts to scapegoat, to blame someone else for the disease, often accompany pandemics, said Smith. Spanish flu, for example, is a “complete misnomer,” named after Spain only because Spanish journalists, unencumbered by state censorship, were the first to report on its spread.

“In World War One, they actually blamed the Germans for starting it, just as today countries (such as Iran) blame the United States for engineering coronavirus, and some Americans have blamed China (calling it the China or Wuhan virus).

“Conspiracy theorists promote the idea someone must have created this in a laboratory. When people don't know, they assume it must be some enemy.”

There are some notable differences between the Spanish flu and COVID-19. No one knew what a virus was in 1918, and scientists wasted precious time trying to identify the bacteria responsible.

“There was such optimism that ‘germ theory,’ or microbiology, would save the day,” but it turned out to be false hope, said Smith, a reminder that you can never make hasty assumptions about how any new disease will behave.

As with COVID-19, the role of nursing was crucial in 1918. Then as now, there was no effective treatment or vaccine. Nurses on the front lines bore the brunt of suffering and death.

“The essential, absolutely life-saving element was nursing, as it is now,” said Smith. “Doctors would get patients in the morning and by evening, they're dead. They don't understand what's happening, and then they realize it's the pneumonia that’s killing people. The key was keeping down the fever, getting liquids into the patient and dealing with respiratory distress.”

The Spanish flu also taught us viruses come in waves, according to U of A public health expert Stephanie Yanow. The second wave in the fall of 1918 was far deadlier than the first the spring before, as huge numbers of soldiers returned home from war, spreading it widely as people congregated in celebration of victory.

In Canada, the pandemic quickly moved west, devastating communities amidst a severe shortage of doctors. All told, 50,000 died in Canada, including 4,000 in Alberta.

At the U of A, the second wave of the pandemic hit just as students were starting a new term, many having just returned home from the front. By October, the university was “disbanded” to treat the ill and prevent further infection. A third wave hit the following winter.

"This was one of our first experiences of a disease on such a global scale, especially in the context of the war and this massive movement of populations carrying disease to all of these far-flung places,” said Yanow.

One reason America may have been slow to pick up on those lessons of 1918 is that those who lived through it were determined to forget, said Smith. After the devastation of war, people preferred to celebrate victory and put the pandemic behind them.

“Epidemics sweep in very fast and it’s very scary,” said Smith. “Everybody has this feeling of shock. Before the war, people felt they had lived in an age of innocence, and it was ripped out from under them, first by the war, and then the pandemic.”

In contrast, Canada’s pandemic protocols—still for the most part observed today—were established in the immediate aftermath of the Spanish flu, said Yanow, after Vincent Massey introduced a scathing critique of the Canadian response to the disease in Parliament in the fall of 1918.

That led to the creation of the federal Department of Health, along with the first draft of Canada’s pandemic plan. It included five of the core pillars of a public health response we have today—ensuring a uniform and co-ordinated response, issuing warnings, circulating evidence-based information, monitoring the disease while compiling statistics, and tracking the pandemic’s pattern of movement across the country.

The good news is that pandemics do eventually end, said Smith, and if handled successfully, COVID-19 may reinforce for Canadians the value of their health-care system. One reason Canada has responded with consistent messaging and public trust is that it did learn from the past.

“A crisis like this is a reminder of why a universal health-care system is so essential,” she said.

It’s also a reminder that the right decisions made by leaders—properly informed by science and the basic principles of public health—can make a crucial difference.

“We have to remember that we have choices,” said Smith. “It’s not inevitable how this pandemic ends up, if we keep our goals of equality, social justice and human rights in the foreground.”