What's cooler than being cool?

Like people, individual quantum particles have properties, identities, and behavior patterns. But when you put them together, new and different kinds of properties emerge—just like people working together in a community.

The coldest city with the world's coldest gas. LeBlanc lab creates a Bose-Einstein condensate at 40 billionths of a degree above absolute zero. 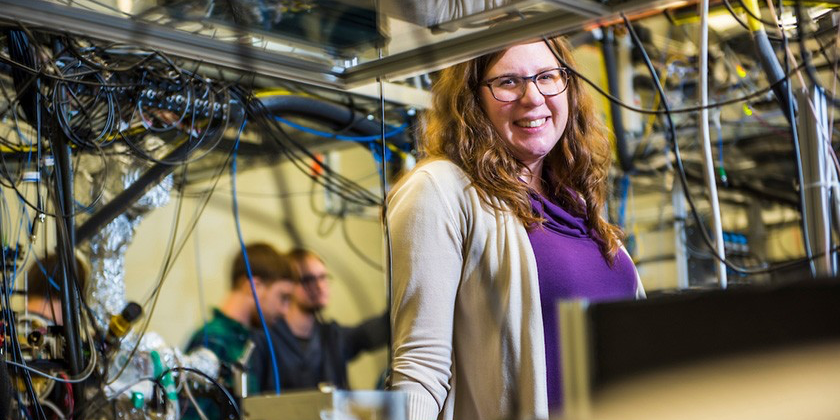 University of Alberta physicists have developed a Bose-Einstein condensate, a dilute gas of bosons cooled to temperatures close to absolute zero, three years in the making. Once understood, the implications have many practical scientific applications, such as quantum computers.

Lindsay LeBlanc, assistant professor in the Department of Physics in the Faculty of Science and lead investigator, explains that creating a Bose-Einstein condensate is a huge technical accomplishment.

“This is unique and difficult to create state of matter in which macroscopic quantum phenomena are visible,” explains LeBlanc, Canada Research Chair in Ultracold gases for quantum simulation. “This means we can study and experiment with phenomena usually only seen at the atomic level—very, very small. Essentially, we’ve created a new form of matter with which to perform experiments.”

At 40 billionths of a degree above absolute zero, LeBlanc’s lab is one of only a few in Canada (and a limited number in the world) to create the Bose-Einstein condensate, making it the coldest city in the world with a lab that reaches these ultra-low temperatures.

“We want to take the Bose-Einstein condensate we’ve created to study quantum mechanical questions about how many-body particles act under the influence of quantum mechanics when they’re together,” says LeBlanc.

“This is an incredible learning opportunity—and the research has applications for things such as superconductivity or magnetism or even more exotic many-body effects.”

Working in vacuum chambers, LeBlanc and colleagues have created an environment a million times less dense than the air in our atmosphere. Here, they collect rubidium atoms and create this ultracold, ultra-low density gas using lasers.

“Rubidium is a metal, according to the periodic table,” explains LeBlanc. “You would think if they get really cold they should form a solid metal. That’s generally what we learn in chemistry. Rather, our Bose-Einstein condensate exists in a metastable state, so it’s actually a very low density and remains a gas so we can reach these cold temperatures.”

In this form, the Bose-Einstein condensate provides an up-close look at quantum properties usually only seen at the atomic level. The gas can be used to create simulations to help us better understand quantum properties and systems.

“Like people, individual quantum particles have properties, identities, and behavior patterns. But when you put them together, new and different kinds of properties emerge—just like people working together in a community. This is called many-body behaviour,” explains LeBlanc.  “We know about things like magnetism and superfluidity, but we’re looking for what else is out there.”

“Now that we’ve created the foundation, there is so much we can learn, and so many ways we can apply that new knowledge,” says LeBlanc.

The lab is now looking for curious and talented newcomers to join the group and help build and operate an apparatus to discover the quirks of the quantum universe.  For more information, contact the LeBlanc Lab.

What's cooler than being cool?
Newsroom