When it's not sex 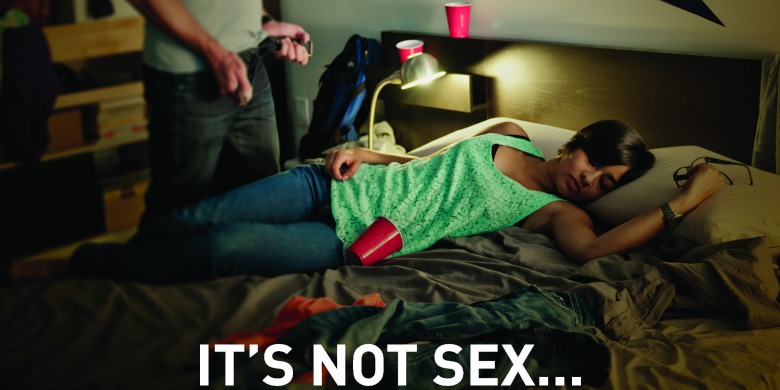 121204-dontbethatguy-banner
Detail from a new poster for the "Don't Be That Guy" campaign. The award-winning campaign aims to help prevent sexual assault by educating young males about what consent means. (Image: Sexual Assault Voices of Edmonton)

(Edmonton) It’s a simple message that bears repeating: Don’t be that guy. And it’s a message that Lise Gotell, chair of women’s studies at the University of Alberta, was pleased to be able to deliver.

An award-winning campaign that Gotell was involved in was relaunched Nov. 30 with a new series of posters focusing on the tag line, “It’s not sex when....” The Women’s Studies Program and the U of A's Sexual Assault Centre are two of nearly a dozen community partners in the Sexual Assault Voices of Edmonton coalition whose innovative campaign has been used by policing and social services agencies worldwide. Gotell is proud of the work the coalition has accomplished, but she says that sexual assault rates remain high across Canadian campuses, and this new proactive campaign stressing communication—and the ability to communicate intentions—is a necessary one.

“People need to be communicative around sex,” she said. “That can prevent a lot of harm.”

The campaign’s target audience is young males between ages 18 and 24. With recent statistics from the Edmonton area showing problematic issues of drinking and sexual assault complaints within that age group, Gotell says taking a different approach to education may be the key to preventing these types of traumatic crimes.

“There’s a clear line when it comes to sexual consent, but despite this legal clarity, we know there’s a very low level of awareness about what sexual consent means,” she said. “Social marketing can help us close this gap.”

Gotell, who studies sexual consent within Canadian law, says the country’s standard for consent goes beyond the popular “no means no” ideology. Citing a 2011 Supreme Court of Canada decision requiring actual, active consent throughout every phase of sexual activity, Gotell says the message is not getting across to the people whose poor judgment may spell harm and trauma for all. Thus, although Canada may stand out in its work to define and interpret sexual assault, publicizing it needs to take a different approach. And the approach Gotell and her SAVE partners have been using seems to be working.

“Canada is understood to be a leader by feminist reformers in other countries when it comes to sexual assault law,” she said. “Our campaign has been a really effective strategy in terms of spreading our message.”

Don’t be that guy: Shifting the responsibility

Gotell says that what makes the messaging of their campaigns different from the norm is that it refocuses the responsibility to the potential perpetrators of an assault rather than the potential victims. She says the standard behaviour-modification messaging is ineffective and seems to blame the victim for failing to heed the warnings. Gotell says the new campaign’s focus is meant to “delegitimize common excuses” for sexual assaults. Further, she says, it broadens the scope of the message to recognize that sexual assault is a problem that transcends sexual orientation.

“The new campaign extends the focus of the message beyond a heterosexual audience,” said Gotell. “This new campaign is intentionally provocative. The blunt language and challenging images are meant to draw attention to our core message: sexual contact without ongoing and active consent is sexual assault.”

SAVE: Why Our Campaigns Are Different

When it's not sex
Newsroom