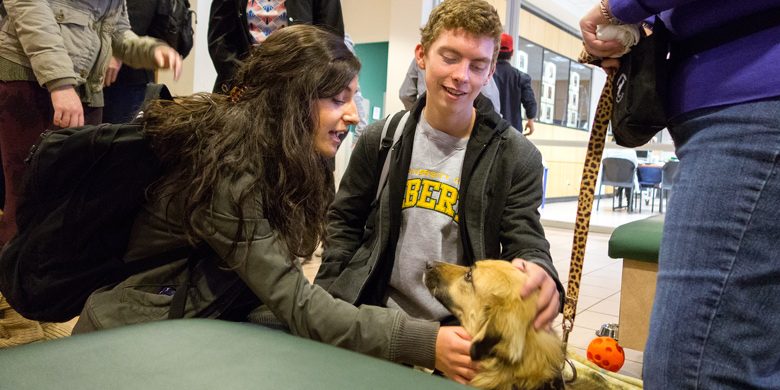 UAlberta students relieve stress with help from some furry friends.

Thirteen years ago, a company called Sky Travel claimed that the third Monday of January is the saddest day of the year. It offered a mathematical formula to back up its assertion, accounting for such factors as distance from Christmas, weather, low motivation, accumulated credit card debt and failed New Year’s resolutions.

It turned out to be a marketing ploy to sell winter getaway vacations, and was swiftly debunked by science, but the idea of Blue Monday stuck.

Some warn against taking the day too seriously, arguing it trivializes real depression. Others say the occasion can be used to throw light on mental illness and promote services like the University of Alberta’s mental health support programs.

Whether or not today is the saddest day of the year, chances are you’re finding it bleak enough. That’s why the Faculty of Arts is bringing a dash of warmth and love—a dose of dog—to students facing the grind of a new term. And unlike Blue Monday, the value of dogs to our mental health is proven by science, according to psychology instructor Connie Varnhagen and anthropologist Robert Losey.

“We have a very long history of being with dogs,” said Varnhagen, who teaches a course on the human/animal bond. “We have an evolutionary history with certain animals, so we are physiologically bonded with them.”

The unconditional canine love and affection is obvious. But look deeper and you’ll find humans and dogs both undergo positive hormonal changes when together, said Varnhagen. There is a rise, for example, in beta-endorphins, hormones that decrease pain and play a role in our biochemical reward centres.

Being around a dog increases the pleasure hormone dopamine, along with oxytocin, the “love hormone,” released when parents interact with their children.

“It’s why there are so many fights when people get divorced over who gets the dog," said Varnhagen.

Exposure to a little puppy love also decreases cortisol, a steroid hormone released when the body undergoes stress. Too much can cause a plethora of health problems.

Varnhagen said the same hormonal changes happen when humans interact with cats and other domestic animals, just not to the same extent as with dogs.

“Historically cats had a different role. They were the vermin killers, so they weren't cuddling with us as much in our homes," she said.

Losey, who has spent his career exploring the 15,000-year human/dog bond, said dogs have actually “shaped human evolution—they have in a sense domesticated us.

“Living with dogs has surely contributed to the long-term success of humans as a species,” he said, adding that for at least 7,000 years they have been “quite literally part of the human family.”

Losey has examined a number of ancient burial sites where dogs have been interred alongside humans, a clear indication of their revered status. At one site in Germany, “a quite sick dog was buried alongside two adult humans, just over 14,000 years ago.

“In other areas of the world, including parts of Siberia, dogs were clearly given their own funerals at death, even being placed in graves with food offerings and wearing necklaces.”

As for the canines on the U of A campus, Varnhagen said they offer welcome relief for students facing the winter-term doldrums.

"Over Christmas you've been with your family—now you're not with your family,” she said. “You're back in school wondering maybe why you're here, maybe not very happy with grades, stressing out about getting a summer job.