Why AI robot toys could be good for kids

A new generation of AI-powered robots could help children learn digital-age skills—and may even encourage empathy, says U of A machine learning expert. 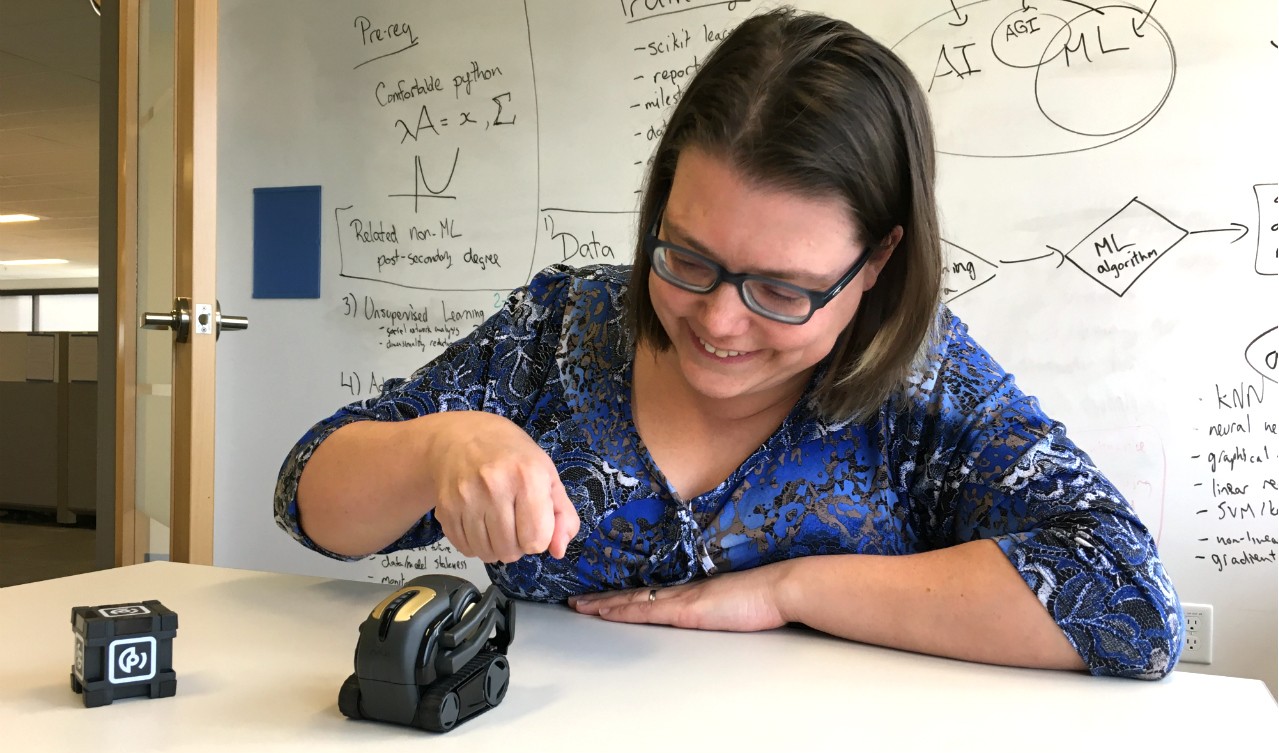 Anna Koop, director of applied machine learning at the U of A’s Alberta Machine Intelligence Institute, gives her Vector AI robot a fist bump. “I still greet it every morning when I come into the office,” she says. (Photo: Bev Betkowski)

A new generation of robot toys with personalities powered by artificial intelligence could give kids more than just a holiday plaything, according to a University of Alberta researcher.

Unlike previous electronic pets like the Furby and Tamagotchi that sparked holiday crazes in the late ‘90s, some of the robotic drones and droids on store shelves this season are packing genuine AI technology, said Anna Koop, director of applied machine learning at the Alberta Machine Intelligence Institute.

“They’re doing face recognition, they respond to voice commands with reasonable consistency, and they have sophisticated processors,” she said.

An object of particular curiosity for Koop is Cozmo and its more advanced cousin, Vector. Developed by Anki, a company founded by three graduates of Carnegie Mellon’s robotics PhD program, the little tank-like robots are so full of personality that even Koop has to take an educated guess at just how intelligent their artificial intelligence is.

“I’m still not sure how much they’re learning from interaction. There is a big difference between running the script that triggers the face recognition routine and actually changing its behaviour in some small way every time I say ‘good robot,’” she said of Vector. “This is a complicated enough routine that it’s hard to tell.”

In fact, Koop and a colleague have a difference in expert opinion about whether Vector is truly showing adaptive learning in its responses, or just using a progression of preprogrammed responses to fool its adoptive human companions.

There’s one thing she’s sure of, though: “The ability to adapt based on interactions is huge. We have serious doubts that it’s happening right now, but a lot of what they’re marketing is ‘coming soon.’ It’s explicitly designed with the expectation that you’re going to be updating it.”

For Koop, mass-market robots like Vector offer a new way to explore her research into one of the most challenging problems in the field—how to make AI systems transfer their “knowledge” to tasks beyond the specific problems they’re designed to solve.

Our biological brains’ ability to adapt what we learn to new situations also raises big questions about what humans might be able to learn from smart robots that act a lot like us, said Koop.

She noted the Anki designers spent a lot of time making the expressions rendered in Vector’s big blue digital eyes seem like genuine emotions—even bringing a former Pixar animator on board as “character director.”

“Having a robot do eye contact is hard, even though it’s not real eyes,” she said. “But it does have cameras, and the eyes are animated to express something that is going on internally. That is the correct direction to go for robotics.”

If all that effort means a child comes to regard their little robot friend as something that can feel fear or pain if it’s mistreated, so much the better, Koop said.

“If they interact with these toys in an empathetic way, that’s got to be a good thing. Whether it’s an imaginary friend, a live pet or a robot, you’re reinforcing habits. Practising skills of whatever variety improves them.”

Koop is anxious to get her hands on yet-to-be-released developer tools for Vector so she can get inside its head and see just what—and how—it’s learning. In the meantime, she said, the most immediate benefit kids stand to gain from AI toys is learning the basics of skills that will only get more important in an AI-powered world.

“It’s a fun platform for coding. A key skill in programming and computing science is the ability to break down a problem into steps. You’re not going to get super-sophisticated programming from the drag-and-drop interface (in Cozmo’s app), but it’s a nice, tangible way to see what’s happening.”

Why AI robot toys could be good for kids