It’s an example of kickstarting not only an economy, but a culture. If the city wants diversification, here you go.

Why Edmonton’s ‘accidental beach’ should be a deliberate feature

Maintaining the popular sandbar would be “bigger than having a new arena” for families, says U of A urban planning expert. 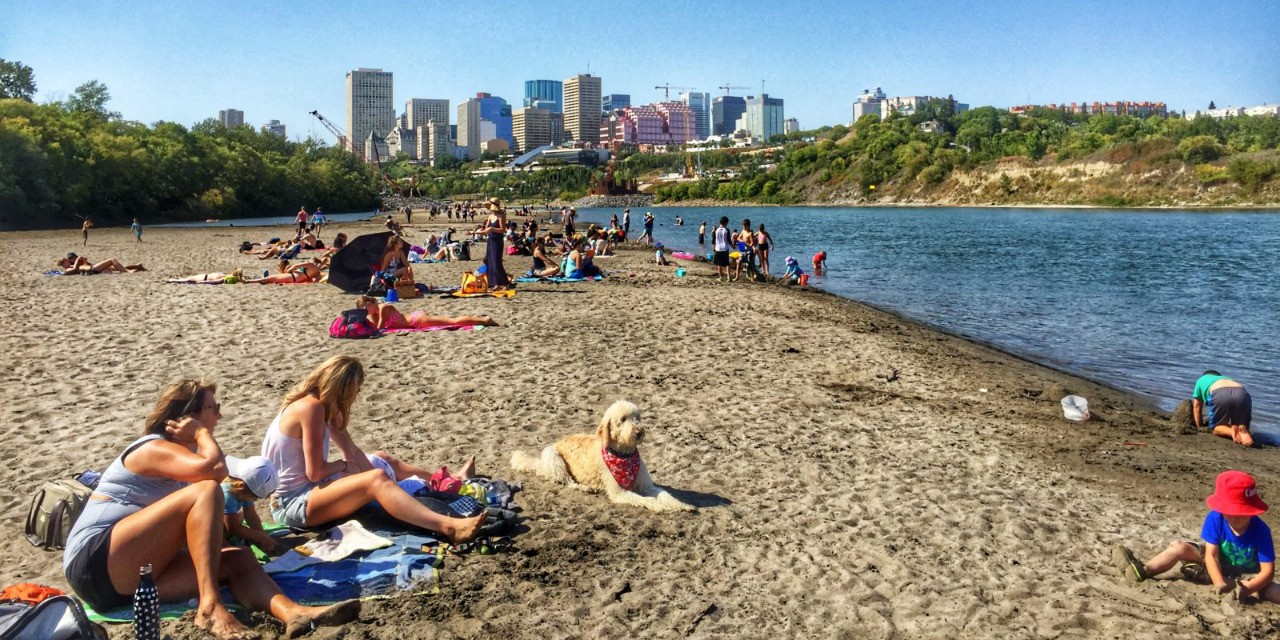 Making Edmonton's "accidental beach" a permanent part of the river valley would give the city a "fantastic amenity," says Rob Shields, an urban sociologist at the U of A . (Photo: Léanne Carrobourg, CampingPassport.ca)

Edmonton’s “accidental beach” should become a permanent part of the river valley, says a University of Alberta urban sociology expert.

“It’s one of the things that’s been missing,” said Rob Shields of the U of A’s City-Region Studies Centre. “It’s one more thing to do in Edmonton and one more place to take the kids. It also gets more people into the river valley and you see the city differently.”

City council’s executive committee will meet tomorrow to debate whether and where to construct a permanent beach in the city.

The current beach formed unexpectedly while a new bridge was being built over the North Saskatchewan River in 2017. Caused by a construction berm that slowed the water, the pop-up beach delighted residents used to a river with a skimpy, mucky shoreline.

The silky piece of land on the river’s south shore represents a sort of “free zone” for residents, said Shields, who studied the allure of Britain’s Brighton Beach for his PhD.

“We’ve got a beach that appears as a result of river currents where before, there was a mud flat. People were able to use it, and it’s a fantastic amenity. It escapes the kind of established order for both the city and the river valley.

“A beach is always a leisure space, always a vacation. It’s as if Cancun came to us, and that’s huge.”

A man-made beach developed in Brisbane, Australia—geographically similar to Edmonton but in the subtropics—brought a new vibe to their inner city, Shields said.

“It was the centrepiece of a revitalization for them. In terms of kickstarting development and changing the image of the city, it was worth hundreds of millions of dollars.”

The accidental beach, known more formally as Cloverdale Beach, can do the same here, he thinks.

“A beach reorients how we think of the city around a new centre point—and our kids will make sure we know it every summer,” he said. “For families, it’s bigger than having a new arena.”

A decline in clean, algae-free lakes around the Edmonton area makes it especially attractive, and as an amenity that would otherwise cost tens of millions of dollars to construct, it can, at least initially, be policed minimally, Shields believes.

“Beaches have relatively little infrastructure, so there’s not much that can cause serious damage, because there aren’t a lot of supports for that activity. What cities do for beaches is post signage, provide access and collect litter. People have to bring their own towels and umbrellas, but it’s an open space and as long as we aren’t building cafes or cabanas, it’s an equitable kind of place,” he said.

A good start would be to post signs telling people they’re using the property at their own risk, he suggested.

It’s wise not to “over-institutionalize” it, he added. “It may be gone next year. It’s going to move with the water and with the seasons.”

Besides providing an impromptu recreational hotspot in the river valley, the beach may have other benefits, said Shields, noting that it spawned enough interest last year to kick off local ventures in selling T-shirts and caps.

“It’s an example of kickstarting not only an economy, but a culture. If the city wants diversification, here you go.”

Why Edmonton’s ‘accidental beach’ should be a deliberate feature