Why the future of global energy is local

With no one-size-fits-all energy source, the transition from fossil fuels to renewables may look different from region to region. 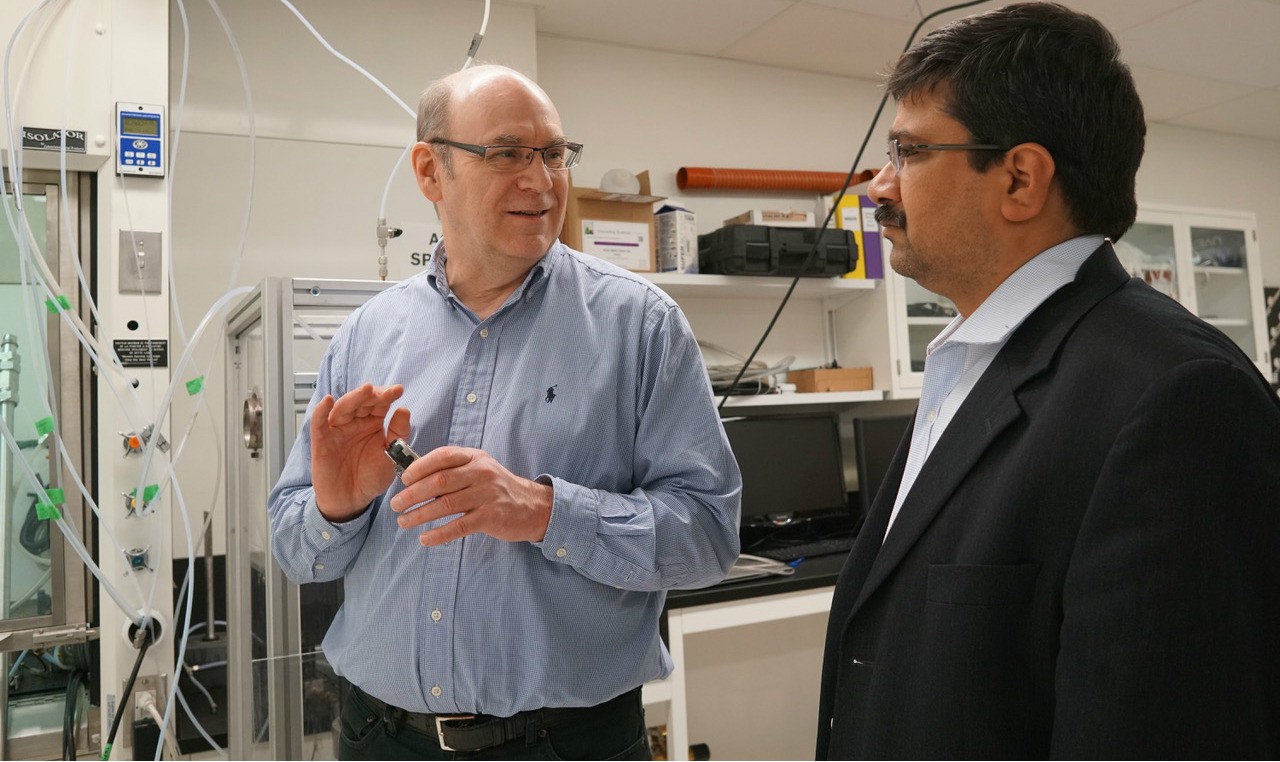 Future Energy Systems director Larry Kostiuk in his lab with deputy director Amit Kumar. “No single alternative energy technology is going to reliably meet the energy needs of every society around the world,” Kostiuk says, “so we have a lot of work to do.” (Photo: Kenneth Tam)

Larry Kostiuk knows the future of energy is complicated.

He grew up in the Canadian Arctic and trained as a combustion engineer in Alberta, at Cambridge in the U.K. and at the Lawrence Berkeley National Lab in California. He then worked for NASA in Ohio and on other projects in the Himalayas, rural China and France. Living around the world taught him that, depending on a society’s geography, culture and history, energy expectations and solutions can vary dramatically.

For more than a century, hydrocarbons have provided energy to drive growth and development—while spewing CO2 into the atmosphere. Even though hydrocarbons remain abundant and relatively cheap in many jurisdictions, concerns over their environmental impact are compelling governments worldwide to implement contentious policies to accelerate the transition to cleaner energy sources.

In 2016, 195 countries signed the Paris Climate Agreement pledging to reduce their greenhouse gas emissions. To comply, the government of Canada announced a series of measures including a requirement for every province and territory to implement a carbon tax this year, or have a federal one imposed. Meanwhile, Alberta’s provincial government launched a climate change plan in 2015 that includes phasing out coal and having 30 per cent of its electricity generated by wind, hydro and solar by 2030.

With the energy and environmental landscape changing fast, investments are also being made in research to understand what comes next—and how to get there. At the end of 2016, the federal government invested $75 million to launch the Future Energy Systems research initiative at the University of Alberta, which Kostiuk, an associate vice-president of research at the U of A, now leads.

Having worked on the cutting edge of energy research throughout his career, he’s under no illusions about how quickly a worldwide shift can happen.

“No single alternative energy technology is going to reliably meet the energy needs of every society around the world,” he observed. “So we have a lot of work to do.”

Fossil fuels can be burned wherever and whenever we need, giving us total control over the flow of energy. Modern society depends on that control, but renewable energy sources generally don’t offer it.

“The sun does not always shine and the wind does not always blow,” said Amit Kumar, a mechanical engineering professor and deputy director of Future Energy Systems. “New energy technologies may look exciting, but we have to understand whether they truly deliver what we need.”

For nearly a decade, Kumar’s lab has been modelling energy systems and their environmental impacts—including all the energy sources available in Alberta from the moment they’re harvested to the moment they’re used. This gives him a diverse view of the affordability and viability of different kinds of energy over their life cycle, and a critical opinion of sweeping statements.

“We need to replace a universal system with custom local solutions,” he explained. “Agricultural communities might create fuels from farm waste. Windy areas might opt for turbine farms. Even within single regions there can be a combination of multiple technologies, depending on what natural sources are affordable.”

Kumar knows many of the technologies necessary for generating, integrating and storing this energy are decades away from being commercially viable. That means the transition can’t happen overnight, and that the infrastructure from the current energy system needs to be maintained. But that old infrastructure doesn’t necessarily have to be a burden.

“We spent billions of dollars on our current energy system, and we should leverage as much of that infrastructure as possible to make the transition more affordable,” Kumar said. “In Alberta we have spent decades drilling holes for oil and gas exploration, so maybe we can use some of them for geothermal power.”

Matching new technologies to real-world needs will be time-consuming but critical, because when dominant technologies change, there are typically big consequences for communities.

How we get our energy has always shaped where and how we live. At the beginning of the 1700s, water-powered mills were built on riverbanks across the European countryside. Coal-fired industry moved jobs from the country to cities. When we accessed the energy in liquid fossil fuels for transportation, the world got drastically smaller.

At each step along the way, people’s lives changed dramatically.

“Before cars arrived in Manhattan there were horses everywhere, along with people who took care of those horses, fed them and housed them. New Jersey is known as the meadowlands because that’s where the hay came from,” Kostiuk explained. “All those jobs ceased to exist, and the infrastructure had to change.”

During a panel discussion in a conference on the future of energy, UAlberta researcher Larry Kostiuk discusses the transition from horses to cars and what it meant for the world.

With coal now being phased out in Alberta, similar job-loss comparisons are easy to make—and Kostiuk believes those consequences need to be understood and studied from the outset.

“When it comes to renewable energy systems, we need to understand exactly what we’re buying, so that we can acknowledge that and deal with the impact on society,” he said. “That isn’t just one simple question for people wearing lab coats. It’s an endless, constantly evolving series of questions for all of us.”

To that end, the U of A research initiative has been divided into 14 themes, with three exploring cleaner ways to access hydrocarbons, and three more focusing on improvements to the current energy system through technologies like carbon capture, utilization and storage and land and water reclamation. Four topics emphasize renewable energy—biomass, geothermal, solar and wind—and another studies the grids and storage technologies that could integrate them into our current infrastructure. The final three themes look at the broader issues of energy from a humanities perspective, in the context of energy’s impact on communities and Aboriginal groups, and from the broadest system-wide point of view.

Since no single research program can give a definitive answer about the future of energy, Kostiuk wants Future Energy Systems to make a contribution that will grow and adapt. To that end, more than 70 per cent of the program’s research budget is allocated to salaries for graduate students who are studying for careers in research or the energy sector.

“These students won’t just be sitting in classrooms learning theories, they’ll be applying the fundamentals they learn in research projects directly connected to the real world,” he explained.

By 2023 he hopes to graduate up to 1,000 of these students, and he knows they’ll be the program’s most valuable legacy.

“If we train 1,000 graduates and each one goes on to a 40-year career in energy, we’ll have contributed 40,000 years of work to these questions,” Kostiuk said with a smile. “That’ll leave a mark.”

Why the future of global energy is local