They’re far more a reflection of what you want them to be, say music scholars. 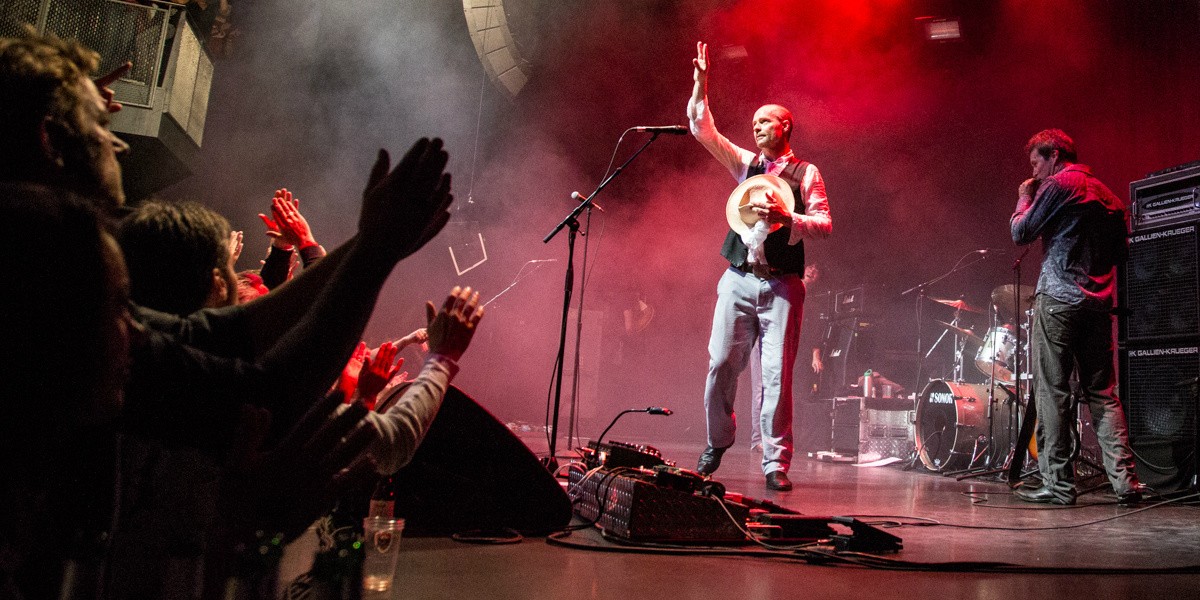 The Tragically Hip's label as "Canada's band" says more about the band's fans and their vision of Canada than it does about the band. (Photo: David Bastedo via Flickr, CC BY-NC-ND 2.0)

The Tragically Hip themselves long resisted the title, but the handle “Canada’s band” has stuck to them almost from the beginning.

The outpouring of love across the country for frontman Gord Downie during the band’s farewell tour in the summer of 2016—and following his death last October—made it clear just how closely the band was linked to a sense of national pride. But beyond the hype and convenient tag, do the Hip really articulate Canadian identity, whatever that might be?

Only if you don’t look too closely, say University of Alberta musicologist Alexander Carpenter and his former undergraduate student, Ian Skinner.

It’s certainly true you can find any number of Canadian references in the Hip’s lyrics—from the wrongful conviction of David Milgaard in “Wheat Kings” to the grim musings of “At the Hundredth Meridian” to the ambiguously titled “Dark Canuck.”

But these references tend to be oblique and inconclusive, say Carpenter and Skinner, never arriving at clarity, begging more questions than answers.

“Every time you hear anything about the Hip, it's ‘Canada's band.’ So we asked, what can that possibly mean? You quickly realize it's a useful tag for media, but the idea that they’re a band invested in Canadiana—that’s blown out the window fairly quickly.”

Their inquiry was launched when Skinner wrote a paper for Carpenter’s senior musicology seminar at the U of A’s Augustana Campus. The study subjects the Hip’s catalogue to what’s called semiotic analysis, to find a coherent system of meaning that captures what it means to be Canadian. In a more recent collaboration, Carpenter expands Skinner’s argument with a psychoanalytic lens, examining how human desire might create meaning where it might not otherwise exist.

There is no doubt that Canada occupies space in the Hip’s lyrics, argues Skinner, but it is mired in ambiguity. That’s not necessarily a bad thing, he adds. After all, Downie was a poet, under no obligation to articulate a clear position on anything.

It does mean, however, that the band and much of their discography function as “empty signifiers,” in the language of semiotics, allowing fans to project their own vision of Canada onto the band.

“The band is a kind of fetish object,” said Carpenter. “The Hip, standing in for Canadian identity, give rise to a desire for identity, and then in a circular fashion come to represent identity, but never in a way that is clear or pin-down-able.”

Take "The Hundredth Meridian,” for example.

“The title seems to clearly point to a Canadian landmark,” said Skinner. “But the lyrics are really abstract and dark—it's mucky terrain. You can't easily decipher anything other than a bleakness or vastness. Listeners will grab onto that and say, 'Well, of course that's Brandon, Manitoba.’ But it’s more ambiguous than that."

The song’s title appears to be a reference to the 100th meridian west, a line of longitude separating much of Western Canada from the Central and Atlantic regions of Canada and, as the lyrics note, “where the Great Plains begin.” But Downie has said in an interview that the song is about a darkness that resides at the hundredth meridian everywhere on Earth, wherever it intersects with humanity.

Another example, said Skinner, is a lesser-known song called “The Dark Canuck,” which at one point references the movie Jaws—perhaps one reason Downie wore a Jaws t-shirt on stage during his farewell tour.

“You try to find concepts of the dark Canuck, which Downie references at the end of the song. He talks about Jaws and the dark Canuck, as if they're two titles of a drive-in, double-feature show. But other than that, it isn't really clear exactly what he's saying or how he's interpreting that phrase.”

As Carpenter explains it, the Jaws reference is itself a perfect empty signifier, pointing to cultural product so ubiquitous in our culture—so often evoked, reinterpreted and recycled—that it ceases to have meaning.

"At some point it just becomes an empty place around which you circle,” said Carpenter. “You can never get to it, only circle around it.”

And perhaps that’s the whole point, he added.

“In some ways, maybe that's why it's possible for the Hip to have this legacy and all of this energy as a Canadian band, because if you ever did arrive at that kernel of certainty—'Ah, so that's what it is to be Canadian!’—the whole edifice would fall apart."

To put the Hip’s relationship to Canadian identity in more stark relief, Carpenter also compares it with Bruce Springsteen’s similarly iconic place in American culture. He said it’s far easier to pin down “the Boss” to widely understood notions of national myth.

To start with, Springsteen draws directly on American folk song traditions, such as those of Woodie Guthrie and Pete Seeger. His songs evoke real American places, often featuring working-class people and their struggles. It isn’t hard to figure out where he stands on class in American society.

“Of course, there is a whole other question about how authentic Springsteen is in this regard, but there are much clearer connections to American-ness and identity, and it's much more viscerally manifest in the songs. There is a more coherent narrative,” he said.

“The songs themselves describe people, places and situations that are clearly part of the American tapestry—unemployed steel mill workers, as in ‘Youngstown’; Vietnam vets struggling to reintegrate into society, as in ‘Born in the USA,’ or portraits of Americana, meeting girls and partying, as in ‘Darlington County.’”

“Place and class in particular help to situate Springsteen's songs, as he says, in the spaces—literal and figurative—between American reality and the American dream…. There is no mistaking his connection to American culture.”

Springsteen’s more sharply articulated songs also reflect a culture more sure of itself and its own singular mythology, said Skinner. One could argue Canada has more fluid, less fixed notions of national identity that evoke the idea of a cultural mosaic, making Downie’s stream-of-consciousness voice a more appropriate way to navigate through it.

Skinner and Carpenter are putting the final touches on their paper before sending it to a most fitting journal for review: BOSS, or the Biannual Online-Journal of Springsteen Studies.