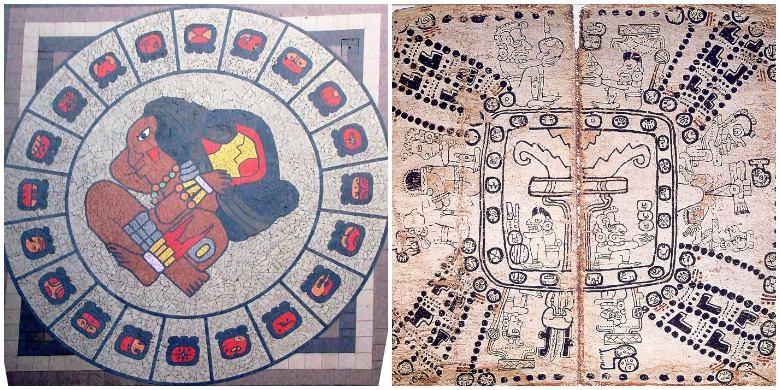 121220-mayancalendars-banner
Dates with destiny: The Mayan Tzolkin Calendar (left), from a floor mosaic in Peten, Guatemala, is a copy of an image from an ancient artifact (image courtesy Edgar Del Campo). At right is a representation of the Mayan calendar found in the Codex Madrid, one of four surviving codices before the Spanish conquest.

(Edmonton) The idea that the Mayan calendar predicts the end of the world on Dec. 21, which has been jangling nerves worldwide, is being questioned by a University of Alberta researcher.

Ann De León, a professor of modern languages and cultural studies at the U of A, says a change will come on that day. But is it an end to everything, or a start to something—a reset of sorts, akin to the one that was supposed to happen in 2000 with the “millennium bug”? Or would it only affect the Maya—a group of tribes indigenous to Central America and the southern parts of Mexico—whose calendar is being touted as the harbinger of a late-December apocalypse?

“The Maya did not believe in the end of the world, or their world. They believed in the end of an era and the beginning of a new and improved era,” she says. “They believed time went in cycles, or b’ak’tun, which is approximately every 395 years, but each is different and better.”

De León says the Mayans have different calendars and that not all Mayan communities believe in end of cycles. For example, the Palenque organized time around the life and death of their leaders.  Their notion of keeping time departs significantly from western understanding—which could help explain why their calendar is widely misunderstood.

Hitting the reset button on time

“In the western perspective, we organize time by starting from zero and from there get further ahead,” De León says. “The Mayans start from a point zero and at the end, they go back to zero.”

And it's that new zero, she explains, that will arrive Dec. 21, marking a new cycle and symbolizing rebirth, even in much of the western world, rather than resulting in mass death.

“According to some hieroglyphs, this Dec. 21 will start a fifth cycle, which is a female cycle because it falls under a Maya constellation of a female goddess, who is the 13th sign of the Maya zodiac, called the 'Lady of the House'” says De León. “It’s going to be a time for planting, for regeneration. The Maya believed the world is going to get better and better, but never perfect.

“They never said the world would end; they’ve always said there will be improvements. In a lot of their oral tales of prophecy that survived the destruction by the Spaniards, they told stories about how the world came to be, what happened in each cycle and how it’s getting better,” she says.

So why do so many believe the world will be destroyed tomorrow?

The rapture and the romance

“The reasons people are inclined to believe in the rapture are complex,” says Doris Kieser, a U of A theology professor.

“Some of them are going to be psychological or religious, and others would be a reflection of the times, the despair around the collapse of our economies in a broader global sense. I suspect that any combination of those things is what fuels people to believe in the end times. That might come someday, but I don’t know that we have any reliable prophecy as to when it may come.”

De León adds that modern bewilderment at the ancient Mayans, whom she says were master stargazers, architects and mathematicians, also helps to explain the predictions of doom. “Part of the misinterpretation of 2012 happened in the 1960s and 1970s with New Age mysticism and incorrect readings of some hieroglyphs, which took off like wildfire and have persisted today,” she says. “The romantic idea of finding lost civilizations or cities of gold in the jungle has an appeal, and that has been promoted since the 19th-century travellers—and even today in movies. The Maya can teach us a lot today in terms of the sciences, mathematics and the arts. But some people with racist ideas about indigenous cultures like to instead attribute such amazing skills to UFOs or aliens.”

Whether believers greet the fateful day with disappointment or relief, De León offers them a note of optimism.

Why the world didn't end on Dec. 21
Newsroom