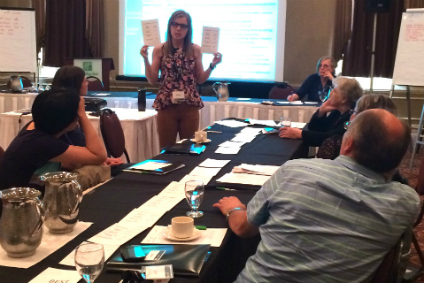 In the study, citizen juries ran through trade-off scenarios involving factors like cost, the patient's condition, the technology involved and the likelihood of improvement. (Photo courtesy Tania Stafinski)

Given proper context, people are willing to fund costly drugs and treatments for rare diseases even at the expense of treatments for larger populations, study shows.

Gene therapy for choroideremia, a condition that leads to blindness in men, is expensive and as yet unproven—but the innovation of such treatments may make their high cost worth it in the view of citizens, even though relatively few people would benefit, a new study shows. (Photo: Faculty of Medicine & Dentistry)

One in 50,000 Canadian men suffer from a rare genetic disorder that results in progressive vision loss that robs them of their sight by the age of 40. There is no cure, but an extraordinarily expensive, unproven gene therapy is emerging that holds the promise of at least delaying the inevitable, while possibly enhancing the quality of life of the 700 or so Canadians who suffer from the condition.

If this scenario sounds like a political non-starter, where budget limits mean the biggest benefit for the majority will win out over the specific and costly needs of the few, it’s not.

In fact, a team of University of Alberta researchers found that when a jury made up of a cross-section of society are given proper information and context, people are willing to fund drugs and treatments for costly ultra-rare diseases, even at the expense of treatments for larger populations.

“The fallacy is that these kinds of decisions are based on the greatest good for the greatest number,” said Tania Stafinski, a researcher in the University of Alberta’s School of Public Health and director of the Health Technology and Policy Unity. “It’s partly greatest need, partly what the gain looks like, partly the severity of the disease and partly the population affected. It is an interaction of all these things, but not whether it is utilitarian.”

To better understand the social values around spending on new technologies and commercially undeveloped “orphan drugs,” Stafinski convened a pair of citizen juries that roughly matched the sociodemographic profile of people in and around Edmonton.

Just like in a legal setting, Stafinski called witnesses that represented government, health-care providers and patients, and led the juries through different trade-off exercises and scenarios. For the most part, specific drugs and technologies were avoided to rid the study of any bias and allow jurors to focus more on the characteristics of the people and what could be achieved.

“The idea is you’re not asking Joe Public spontaneously to give a gut reaction,” she said. “If you’re looking for public sentiment and you’re not particularly worried about what the public truly values, then do a public opinion survey—but understand our research is telling us that is not an accurate reflection of what society values.”

The jury was put through seven trade-off exercises focusing on things that might matter to them, such as cost, the condition of the patient, what kind of technology is involved, how much improvement could be expected, and even caregiver burden.

“There was never a moment during the study where we let them get away with thinking that someone wouldn’t be sacrificed.”

Despite the stakes, Stafinski said, uncertainties around whether the technology would be able to fully deliver on its claims didn’t play a significant role in decision-making. Even in cases, such as the gene therapy for vision disorder, where there was a risk the technology would fail, she found that jurors valued the information and innovation component of the research.

“They actually traded off a technology that would have given a little bit of quality-of-life benefit to another group for the value of the innovation,” she said.

Age didn’t factor into final decisions either, although the group had to “evolve” to get there.

“With all these perspectives—and this is why a jury is so important—jurors quickly realized what things they were comfortable making an emphatic public statement about, and age wasn’t one.”

Stafinski said final decisions on what technologies and drugs to fund are currently made by a provincial review committee, guided by a pan-Canadian evidence review process that leaves it up to the provinces to take into account social and ethical implications.

She said there are examples in the Canadian health-care system where a small gain for hundreds of thousands of people is implicitly sacrificed to give sufficient medical gains to a small group. One example is administering the flu vaccine—inhaled versus injected.

She explained that, although a large segment of society may prefer to have the inhaled version of the flu vaccine, with a few exceptions, policy-makers aren’t spending the extra money for the inhaled vaccination, choosing instead to fund medications such as those that improve the quality of life for the 4,000 Canadians who suffer from cystic fibrosis.

“What matters to jurors isn’t necessarily the 100,000 people you would be helping, but rather what is being done and what is being sacrificed to help the smaller population,” she said.

“If you’re trying to get an idea of what matters and what might be acceptable to the public, what a jury does is provide policy-makers with a useful way of formulating those general statements that might help guide a decision-making process.”