A doctor's empathy and compassion in itself is healing.

Why vulnerability is the best medicine

How Michelle Huie came to terms with a serious illness and will be a better doctor as a result. 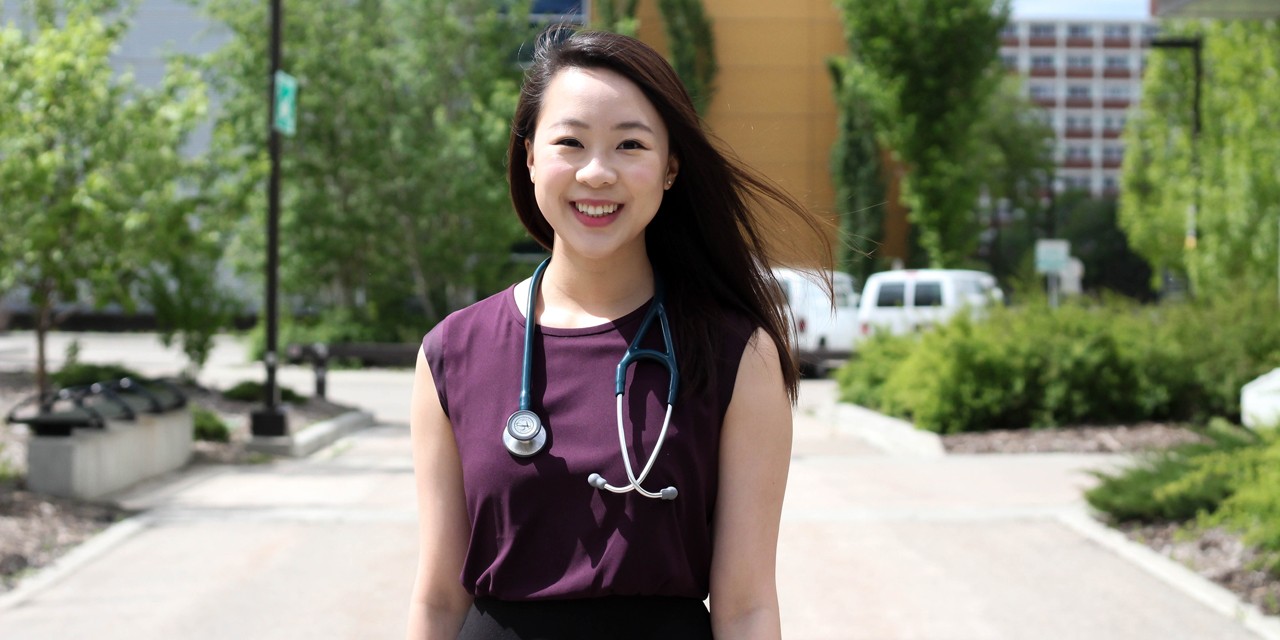 In getting the help she needed to combat depression, medical graduate Michelle Huie discovered that not only is depression not a weakness, it just might be one of her greatest strengths. (Photo by Melissa Fabrizio)

Calgarian Michelle Huie started first-year medical school at the University of Alberta like every other student: enthusiastically. She knew that acceptance into the competitive program is a milestone in and of itself.

Maybe, however, if she peered a little deeper inside, she felt a little trepidation, too. No matter, she told herself. She would do just fine. After all, she’d always been good at studying.

To many, Huie—who was voted class representative by her peers—appeared to be an outgoing, positive force of energy. But to those who knew her well, like her boyfriend, all was not what it seemed.

“By mid-year, he told me that I wasn‘t myself. He felt something was going on. He said I should talk to someone,” said Huie.

“I insisted I was just stressed out.”

Huie told herself that concentrating in class wouldn’t feel like running in water forever. That sleeping and eating would once again be pleasurable activities. That she wouldn’t be standing on the street corner, weighed down by her heavy backpack, thinking absent-mindedly, “I could just step out in front of this bus . . .”

Not even that chilling thought alarmed Huie. She’d left it too late.

“I was very sick,” she admitted. “I tried to mask it. Nobody else seemed to be struggling. And with medical students, you are with a cluster of people who strive to overcome obstacles and push past things. Everyone is a rock star, so I felt like I couldn’t show I was struggling.”

She added, “No one asks to get sick. The difficult part was accepting it.”

“It was surprising to me because I’d never struggled with grades. When you are sick, you just can’t perform at your best.” She learned that if she wanted to be a doctor, she would have to redo her first year—an allowance the faculty makes in rare cases.

On top of coping with a serious mental illness that often comes with a wrongful stigma of weakness, Huie would have to find the courage to face her classmates and tell them the truth.

“It was absolutely devastating.”

Toward the end of first year, Huie reluctantly walked through the doors of the Office of Learner Advocacy & Wellness (LAW) in the Faculty of Medicine & Dentistry. “I went there because my partner kept pushing me. And part of me knew that maybe this was something bigger than myself and maybe I needed help.”

Mental health concerns are very common in higher education, especially in professional programs, said Shahin. "Medicine is a demanding program, and learners generally share a high drive to succeed and are very ambitious. The combination of some common personality traits and a demanding environment can increase the risk for mental health challenges for some learners."

Huie said she ended up going for counselling all spring and summer. “Jaleh is incredible. She understands the personalities that come into medicine perfectly. That we are anxious, people pleasers and perfectionists.”

Huie kept up her activities, took on a research project and travelled to Cambodia to work for an HIV non-profit while she received counselling.

“I think that’s why people were so surprised to hear I was sick. Maybe that’s why I was surprised I was sick,” she explained. “I was still accomplishing things. You have an image of a depressed person who can’t get out of bed. Some days were like that, but mostly I still dragged myself out and did things.”

Treatment helped Huie not only accept her illness, but also slowly begin the process of managing its symptoms. She also took actions to help her recovery, including exploring aspects of herself beyond university life. “I didn’t want to only be a medical student. I’d become wrapped up in that self-identity. It couldn’t be my everything.”

Huie decided to give up being class representative, joined intramural volleyball and became a mentor to a 12-year-old girl in the Boys and Girls Club. “It was very healing. Every time I met with her was a time to help her navigate her challenges. And afterward I could self-reflect. I think she inadvertently mentored me as much as I mentored her.”

Huie also got involved with a camp that mentored underprivileged high school students and exposed them to medical school. “I didn’t realize it at the time, but I was choosing activities that really interested me, and they were all leading me towards my specialty—pediatrics. I discovered how important youth and advocacy work was to me.”

Huie would have another major discovery during her recovery with an even more profound impact: not only is depression not a weakness, it just might be one of her greatest strengths.

A few weeks before Huie returned to first-year orientation for what she jokingly dubs “Year 1.5,” she told a few friends about her illness.

“The majority of everyone else was surprised to see me there,” she said. “Everyone was so excited to be going to medical school. There I was, devastated to be back at square one.”

But she underestimated others' empathy.

That’s not all: outside of Huie’s involvement, mental health grew into a class initiative and in March 2014, the students launched what’s now an annual coffeehouse event called Monologues in Mental Health.

More than 100 medical students and faculty attended the first event, and plenty stepped up to the microphone and shared, including Huie. “Just putting down the words about how I got from point A to B, and to be reflective, was hugely healing. And then sharing was also hugely empowering.”

The power of vulnerability truly hit Huie that night. “There’s a stigma in our profession where if you are a doctor you believe you can’t get sick. There is a shift in the culture but it’s still there.”

Shahin agrees. “Unfortunately, stigma exists about mental health in our culture and society. In my experience, I find our faculty and medical learners have become leaders in addressing it. We still have a long way to go, but we have a number of initiatives such as support groups and the mental health monologues in place that raise awareness.”

Huie recalls educators in her first year warning that struggles with performance due to stress, mood or mental illness were not uncommon. But it wasn’t until the coffeehouse experience that she realized how much stigma keeps others from connecting and supporting each other.

“It was weird, but after I shared, in general and especially at the monologues, people would come up to me, not even close friends, and say, ‘Hey I’m going through something right now, can we talk?’”

Far from shying away from the role, Huie embraced it because she didn’t want others to let fear and isolation keep them from seeking help.

If she noticed a classmate was off during rotation, she’d stop and ask them how they were; more often than not they opened up to her. “People felt like they could be vulnerable because I am vulnerable.”

By the end of the year, Huie was feeling more like herself.

“I remember thinking, ‘OK, I’m back.’ I realized my bad days weren’t happening anymore. I was more humorous. I was enjoying medicine. I saw a bright light at the end of the tunnel.”

She was also entering clerkship, which moved her out of the classroom and into direct interactions with patients. That was when she felt the transformative powers of her personal experience combine with her education . . . and what kind of doctor she would become.

“A lady came in teary-eyed, confused as to why she never wanted to leave the house. I asked my preceptor if I could have a few minutes to sit down with her and hash it out. In that moment, I realized how my own personal experience changed how I reacted to the situation.”

She added, “Being sick is humbling. It makes you realize how it impacts people’s lives. On the wards, you see patients for 15 to 30 minutes a day or less. Illness is 24 hours for a patient. It doesn’t leave them. I knew as a patient how hard it is to ask for help.

“Because doctors see illness every day, it’s so important for them to remember every illness is unique to every patient. Patients often wait weeks or months to see a doctor, and their encounter impacts their care as much as the procedure or medication. A doctor’s empathy and compassion in itself is healing.”

For outstanding compassion in care during her clerkship, Huie was awarded the Dr. Tom Ranieri & Dr. Alf Conradi Excellence in Compassionate Care Scholarship.

Today, the graduate is looking forward to starting a residency in pediatrics at the U of A, and she’s managing her health by ensuring an identity outside of school, eating and exercising well, learning to say no, and, perhaps most importantly, opening up and sharing her experiences as much as she’s comfortable with others.

“No one should ever have to go through an illness feeling alone.”

Why vulnerability is the best medicine