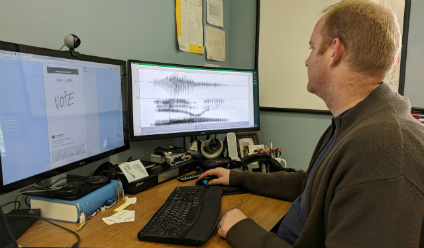 Linguist Ben Tucker says the ambiguity in the "Laurel/Yanny" audio clip is the result of a combination of factors, from the audio quality and speaker's voice to the way the popular tweet is worded to make listeners think it's either one option or the other. (Photo: Sean Townsend)

Why you hear Laurel or Yanny

U of A linguists explain how one word can sound so different to so many people. 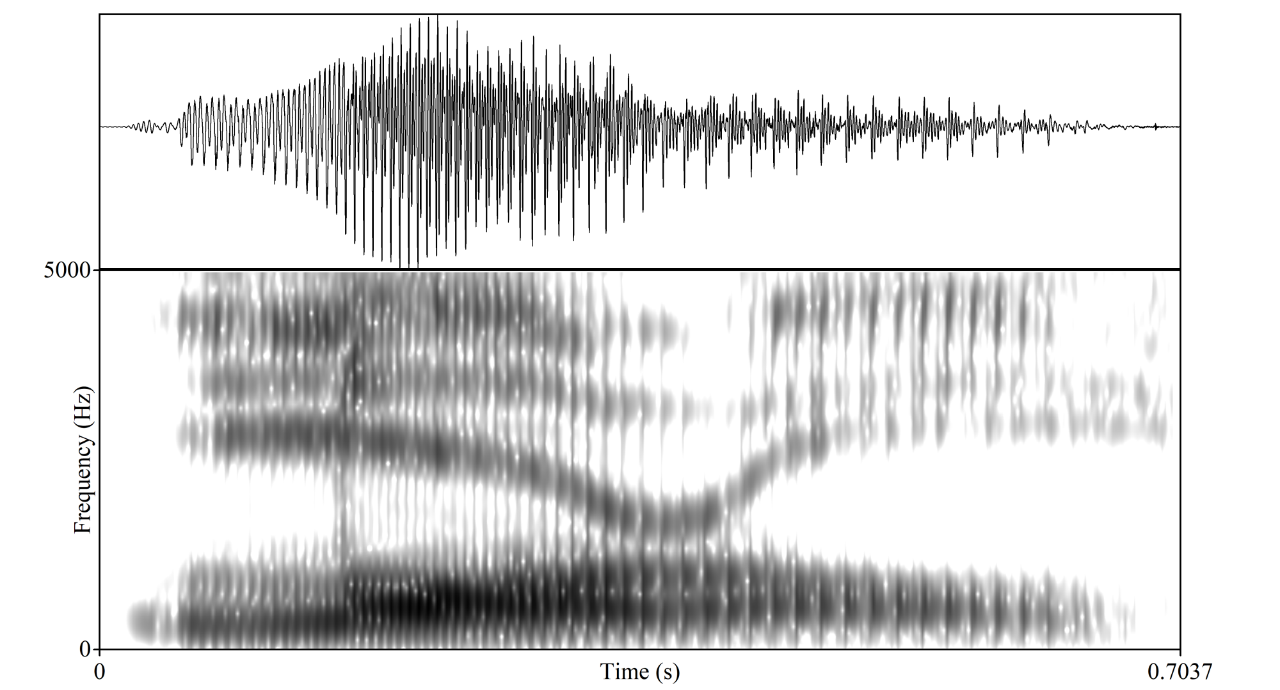 University of Alberta linguists looked at the waveforms of the original "Laurel" sound clip (pictured) and the lower-quality version of the file making the rounds on Twitter. They found that the Twitter version contains lower frequencies that can mask higher ones, leading the brain of some listeners to fill in the hidden frequencies and interpret the word as "Yanny." (Image courtesy Ben Tucker)

The latest this-or-that debate—do you hear Laurel or Yanny?—that’s been raging on the Internet this week comes down to a messy sound file and the brain of the beholder, according to two University of Alberta linguists.

The debate was sparked when a Reddit user posted the contentious clip with the deceptively simple question, “What do you guys hear?” But it really took off when the influential Twitter user Cloe Feldman posed the question to her 212,000 followers.

What do you hear?! Yanny or Laurel pic.twitter.com/jvHhCbMc8I

In an attempt to clear up the ensuing confusion, the original poster revealed the source of the ambiguous audio: a pronunciation of the word “Laurel” on the online dictionary vocabulary.com. But to those in the Yanny camp, that only raises more questions. How can it sound so different to so many people?

U of A linguist Terrance Nearey came up with what he called “the most likely explanation” by analyzing two versions of the clip—the original from vocabulary.com and the Reddit version.

He said the difference might be explained partly by a phenomenon called “upward spread of masking,” in which lower-frequency sounds can hide weak higher-frequency ones. He cited research showing that the masking effect tends to increase as we age, which could mean older listeners are more likely to miss the two L sounds in “Laurel” and interpret the word as “Yanny” instead.

After running the Reddit clip through sound filtering software, Nearey also discovered that its noisier signal helps explain not only why some people miss the L sounds, but also why the “Yanny” voice sounds much higher to those who hear it.

Looking at both waveforms of the word, Benjamin Tucker, another U of A linguist, said he can see how the rise and fall of the sound pattern could be interpreted in more than one way, especially in the Twitter version of the file.

“If your brain processes the speaker as having a high voice, you might hear ‘Laurel.’ But if you think this is a lower voice, you might process this as ‘Yanny.’ It’s the masking and the fact that people are playing it on cellphones or relatively inexpensive computer speakers.”

He added that the tweet itself could be part of the reason some people hear “Yanni.”

“The way the meme is set up, you only have two choices, so it’s going to bias people. There’s not really just two solutions, there are multiple solutions,” he said.

“The trick with this is that it’s a combination of all these things.”

Tucker, whose research focuses on how the sounds of words can get “reduced” in the flow of conversation, also pointed out that varying interpretations of words aren’t limited to online snippets.

“It’s something we do all the time. We map sounds differently. For example, different accents can bias your perception,” he said.

So then … how can we trust what we hear?

But if muddy audio or an unfamiliar speech pattern is all it takes to fool the brain, how can we trust anything we hear? Tucker said it’s a matter of taking in all the other information that usually accompanies what we’re hearing.

“We use the context to reconstruct the meaning. We’re using lots and lots of cues. This is a case where the cues are restricted, so the brain tries to reconstruct what it can. But without additional cues, we’re left to guess. But when we have lots of cues, listening to someone in conversation, we’re reconstructing all those things,” he explained.

And though all the arguing and name-calling over an audio clip may seem frivolous, Tucker said he thinks it’s a good thing because it highlights the nuances in something most people take for granted.

“I’m excited that people are caring and thinking about language, and wondering about some of the questions that I wonder about,” he said.

Why you hear Laurel or Yanny