Powel Crosley lost his wife to cancer 10 years ago. Now, he could be on the cusp of a breakthrough in treating the disease. 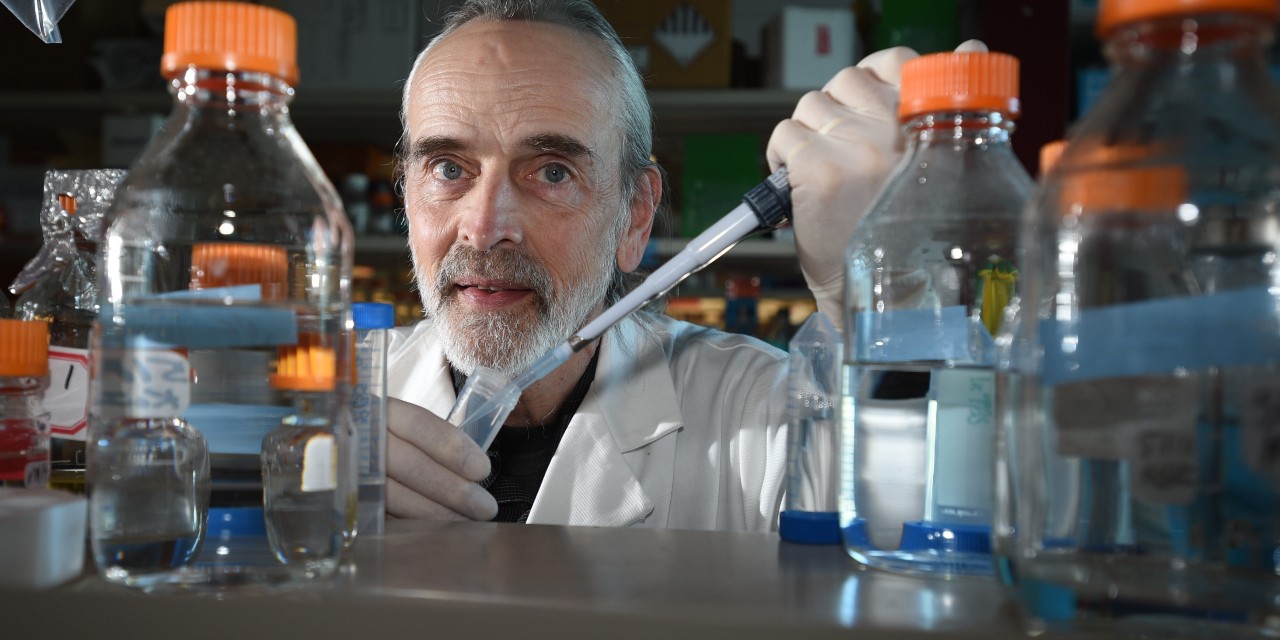 Powel Crosley dedicated himself to finding a cure for the rare cancer that claimed his wife, Sladjana, 10 years ago. Now, the U of A master's graduate in oncology could soon see the first clinical test of a drug combination to treat the disease. (Photo: Women and Children's Health Research Institute)

When his wife died of a rare ovarian cancer 10 years ago, Powel Crosley vowed to find a cure. Despite a lack of scientific training at the time, he is now within sight of the first ever clinical test for a treatment.

The 66-year-old will graduate tomorrow with a master’s degree in oncology from the University of Alberta. In the near future, his work could be the basis for a clinical trial of a new treatment for granulosa cell tumour (GCT).

“When you sit down and start looking back at everything, so much is just serendipity,” Crosley said. “It just happened. Crazy.”

Sladjana Crosley died in 2009 after a 13-year battle with a dire prognosis.

Of the 225 Canadian women diagnosed with GCT this year, roughly one in three will see the cancer return. Barring advances, four out of five of those women will die.

Throughout her recurring illness, Sladjana refused to accept the odds. A chemical engineer by training, she scoured academic journals and began contacting researchers about the most promising ideas. In 2004, she founded the Granulosa Cell Tumour Research Foundation (GCTRF) and gathered an online community of women facing a similarly grim future.

Without major funds or established connections to research laboratories, progress remained elusive. For Sladjana, the surgeries became more aggressive, more frequent and less effective. The cancer continued down its inevitable path while scar tissue eventually made it too risky to go under the knife again.

After she died, Powel vowed to continue leading the foundation she started. At an age when many are slowing down, Crosley started running marathons to raise money for research. He also enrolled at the U of A, taking chemistry, biology and genetics courses to better understand the disease.

Under Crosley’s leadership, the GCTRF has raised more than $300,000 for research, a series of small grants dispersed in labs around the world.

Yet it was Crosley’s return to the classroom that has led to the most promising results so far. After an upper-level oncology class with Mary Hitt, Crosley approached the researcher with the idea of tweaking one of her current experiments.

Hitt was intrigued. When Crosley showed up at her lab, she suggested he conduct the experiments himself. That volunteer project gradually led to Crosley becoming a permanent fixture, working long hours seven days a week.

Hitt loves Crosley’s “unparalleled” motivation, fluency in research and willingness to call up scientists to hone his experiments. Young researchers get a chance to work with a role model who treats science as more than just theory.

“To have him in the lab right there, it’s in your face, ‘There are people dying of cancer and we have to do something about it,’” Hitt said. “It’s not just playing around with cool toys in the lab.”

Crosley eventually moved on to testing a drug Sladjana had spotted years earlier in an academic journal. The foundation hadn’t found anyone to look at PAC-1, a new drug developed by an American chemist, so Crosley did it himself.

Having done work that has uncovered a promising combination therapy, Crosley decided to go a little further and complete a master’s degree. Hitt says his work could easily be developed into a PhD dissertation, but Crosley shrugs off the idea, though he suggests it makes him regret an earlier aversion to science.

“When I was in university the first time around, I didn’t want to go anywhere near science,” said Crosley, who dropped out of a geography PhD decades ago. “I guess I have some capabilities I didn’t realize I had.”

Building toward a cure

Crosley’s project has also added TRAIL, a natural protein that was hailed in the 1990s for its promising ability to cause ‘suicide’ in cancer cells, but has since proven unstable and prone to resistance.

The early lab results combining PAC-1 and TRAIL have shown they could work well together. Through the foundation, Crosley has been in touch with Paul Hergenrother, the University of Illinois chemist who created PAC-1 and is conducting a clinical trial of the drug. Crosley believes the trial could be expanded to include TRAIL, which would be a dramatic step toward a potential treatment for GCT.

Crosley has also worked with Hitt to modify a virus that could potentially “trick” GCT cells to produce TRAIL on their own, which could help move toward a more targeted treatment.

In the world of cancer research, Hitt says few promising ideas ever lead to animal testing, let alone human trials. As far as he’s come, the odds are still stacked against Crosley.

“Most things don’t work,” Hitt said. “Of things that go to clinical trials, 90 per cent are never going to go past the first step. That’s just the way it is. So you keep trying.”

Crosley could be on the cusp of a big step forward. Or he could hit a dead end. But for the next two years, he’ll remain a researcher in Hitt’s lab, working on a treatment for a disease that transformed his life. Thanks to a research proposal drafted largely by Crosley, Hitt has just received a $120,000 grant to try out the combination therapy in animal trials.

Crosley had no say in the selection process, which was awarded by the Cancer Research Society through a competitive, arms-length process. The grant matched a $60,000 fundraising campaign spearheaded by the GCTRF, the organization Sladjana founded. It’s just another touch of serendipity, Crosley says, a reminder of his wife’s tireless efforts to help thousands of women find a better prognosis.

“I feel a sense of responsibility. I see how much hope these women have invested in this,” said Crosley. “I think Sladjana would be pretty excited by the science.”