Wildfires projected to get more common, harder to control 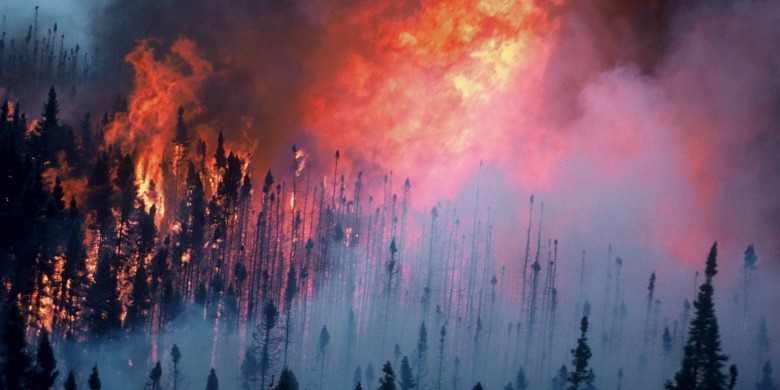 The world's wildfires annually burn an area of forest equivalent to the size of India.

(Edmonton) Devastating wildfires the likes of which razed Slave Lake in 2011 will become more common and tougher to control, according to new research from the Faculty of Agricultural, Life and Environmental Sciences.

Mike Flannigan, professor in the Department of Renewable Resources and director of the Western Partnership for Wildland Fire Science, and his team used weather models to predict that global warming will increase the severity of wildfires in the northern hemisphere threefold by the end of the century and extend Canada’s fire season by 20 days.

“Temperature is strongly related to fire activity—the warmer it gets, the more fire we get,” said Flannigan.

He explains that warmer weather increases the rate of evapotranspiration—the combination of evaporation and plant transpiration, which leads to drier and more combustible forest fuels. “For every degree of warming we need a 10 per cent increase in precipitation to compensate, and we are not seeing that.”

Flannigan says his team was able to show that a rise in temperature will increase the length of the fire season by three weeks over the next 85 years. He adds that the ensuing warmth will also invite more lightning strikes. Currently in Canada, lightning starts just 35 per cent of wildfires but is responsible for 85 per cent of the area burned.

Putting out fires in a warmer world

Given this relationship between fire activity and temperature, Flannigan and his team held their results up to the Wildfire Severity Index, a weather-based fire danger metric that classifies fires according to size and intensity, and asked how difficult it will be to suppress these fires in a warmer world.

“What we’re finding is this index is going to increase by a factor of three,” he said. “This means fires globally are going to be three times harder to put out than they are now.”

Flannigan says you don’t have to look very far back to see wildfires are getting worse, pointing to the devastation caused in Australia in 2009 and again last year, in Russia in 2010, in Slave Lake and Colorado Springs in 2011 and in Arizona earlier this year. “Things are tough right now—and this research suggests it’s going to get even tougher.”

He says the world’s wildfires annually burn between 350 million and 600 million hectares of forest, an area equivalent to the size of India. And although protecting communities from a wildfire’s path is paramount to prevention and planning, he says, wildfires also take an economic toll, and not just on the forestry sector. In 2011, dips in Canada’s GDP were attributed to delivery problems caused by wildfires in Alberta.

Preparing for a costly challenge

Flannigan says this research will help the province, which spends roughly $800 million on direct fire management every year, prepare for the challenges that lie ahead.

“The University of Alberta has a long tradition of doing fire research. I am just continuing in that tradition of research,” he said. “Fire is important to economics and community protection, but also to understanding the natural role of fire.

“The more we understand about fire, the better we are able to manage it.”

Flannigan concludes that although wildfires aren’t necessarily bad things from an ecological standpoint—our boreal forests survive and even thrive from a regular regime of stand-replacing intensive fires—his research suggests we may be reaching the limits of what forests can take.

“If we get a lot more fire, what’s going to happen to the boreal forest?” he said. ‘”By the end of the century we will be in uncharted territory as far as the amount of forest fires.”

Flannigan and his team are following up this research by looking at recent research suggesting the northern hemisphere’s jet stream—the band of fast-flowing air 10 to 12 kilometres above the Earth—is weakening, and how that pertains to wildfires.

Wildfires projected to get more common, harder to control
Newsroom