Will proposed changes to food system make it easier for Canadians to eat healthier? 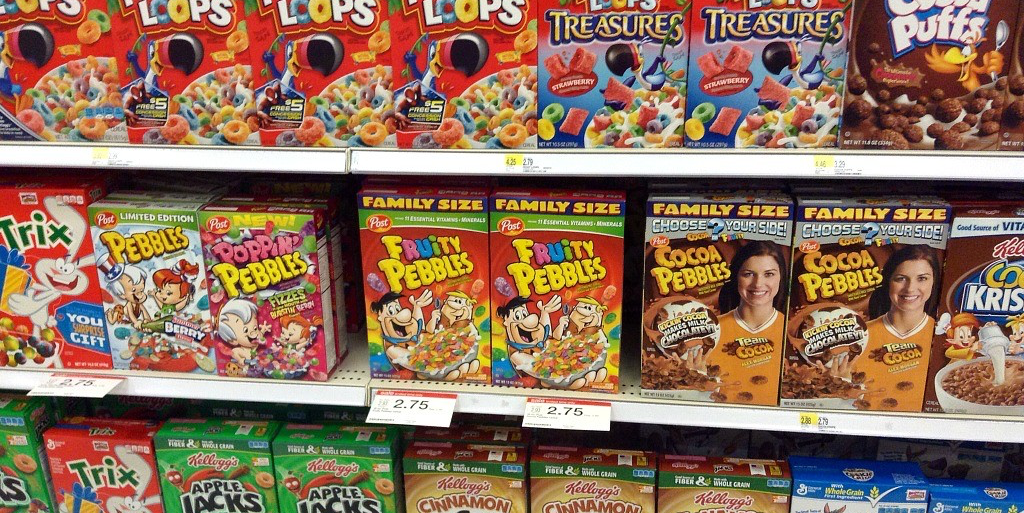 Easy-to-read nutritional labels on the front of packaging could help parents cut through the clutter of advertising to kids, say UAlberta researchers. (Photo: Mike Mozart via Flickr, CC BY 2.0)

The federal government’s plan to serve up a heaping helping of new rules for Canada’s food system is good news for healthier eating, say University of Alberta experts.

Proposed changes by Health Canada aimed at package labelling and marketing to children are a good start on a comprehensive approach to food and nutrition policy needed to address health issues like obesity, said public health professor Kim Raine, who presented her feedback to a review panel in Ottawa last week.

Over the past few weeks, Health Minister Jane Philpott announced several proposed improvements, including limits on marketing unhealthy foods to children, clear front-of-package labelling and efforts to tailor the Canada Food Guide to individuals for a Healthy Eating Strategy, all intended to help Canadians make better choices whether dining out, snacking at the vending machine or shopping for groceries.

At the same time, regulations for antibiotic use in food animals, using a One Health approach aimed at protecting against antimicrobial resistance in humans, have been adopted. And Health Canada is also modernizing the Canada Food Inspection Agency (CFIA), which is responsible for protecting Canadians from preventable food hazards and was shifted from Agriculture and Agri-Food Canada.

“Now the government can look at these issues in a more co-ordinated way than when there were multiple ministries involved,” said Ellen Goddard, professor of agricultural marketing and business.

“It may be easier to have more of a one-stop shop for everything to do with food issues, rather than figuring out which agency or organization to talk to.”

Improvements in some cases are overdue, as in key policies like Canada’s Food Guide, Goddard noted.

“We’ve had an irregular process historically for updating the food guide, with long gaps between updates in 1992 and 2007 and nothing since then. Even then, there weren’t massive changes.”

The shift to “upstream intervention,” making changes to how foods are promoted and formulated—such as limiting marketing to kids, reducing sugar or salt content or labelling at point of purchase, such as on menus, for example—is in fact a catch-up exercise for the government, but a welcome move, said Raine. “It tips the balance more towards supporting people in making healthy choices.”

One missing ingredient is the environmental impact of food production, Goddard said.

Discussion of U.S. food policy, for instance, recently dealt with recommendations about less consumption of meat with a shift toward plant-based products, which carry a lower environmental footprint. Though nothing was passed by government, it did raise public awareness—and disappointment, Goddard said.

“People would like those kinds of recommendations from government, and I think it is time we consider whether there is a role for that in Canada’s Food Guide.”

Social media’s emerging usefulness as a tool is also working its way into the new regulations, Goddard noted. Plans to modernize the food guide through handy phone apps that calculate a person’s lifestyle factors to come up with eating plans and tips are already in use by other organizations, including Tesco grocery stores in the United Kingdom.

“Using that method will make the food guide much more useful in terms of personal health outcome.”

Tweaking CFIA practices to make better use of online communications—as in alerting the public to food recalls—is also a good idea, she said.

And tougher proposed regulations calling for improved labelling on the front of food packages to flag products high in sugar, salt and saturated fats are also likely to be popular with shoppers, added Goddard, who has researched the topic herself.

“Every time I ask the public about labelling, no matter what it costs, they are happier with more information, even if they have no intention of reading it every time they shop—they know the information is there.”

And though people are tempted to reach for feel-good foods they know are bad for them, research suggests the proposed changes to package labelling and marketing to children will still make a difference, Raine believes.

“The key is the collective impact of all these interventions; together, they represent a culture shift.”

The downside of tougher labelling, though, is that food companies could replace one unhealthy ingredient with another to keep customer-pleasing flavours the same, Goddard said. “You can’t always guarantee that substitutions in the recipes will make the product healthier overall.”

Raine hopes to see something like a red, yellow and green “traffic light” system used for labelling food.

“Front-of-package labelling sounds minor, but if you wanted to look at the labels of everything you were shopping for, you’d have to take it off the shelf and it would take hours. Traffic light labelling would make it much easier for someone to make a judgment quickly.”

Health Canada’s plan to restrict marketing of unhealthy foods to children 13 and under, as Quebec is already doing, gives the public some teeth when it comes to enforcement, Goddard said, pointing to a case against a food company that was fined by the province. “In essence it allows the public to raise concerns with the government.”

Raine wants to see the age raised from 13 to 18. “Adolescents may still be very vulnerable to marketing, too.”

Whether the federal government will go that far in its regulations remains to be seen, she added.

“What ends up being palatable to the government and the public, we don’t know yet. But we are definitely moving in the right direction and when we look at how much unhealthy products are promoted to us as adults and children alike, there is no way we can solve health problems through nutrition education alone, so this type of approach is extremely welcome. And science shows it is effective.”

Will proposed changes to food system make it easier for Canadians to eat healthier?
Newsroom