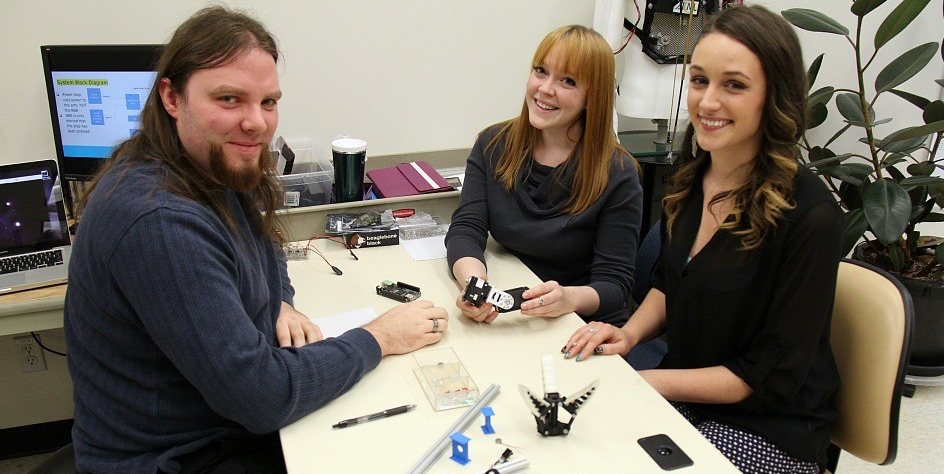 The winter break was a chance for students to enjoy the precious gift of time. Some headed to the tropics or the ski slopes; others kicked back and celebrated the holidays with family and friends. But for one group of engineering students, tasked with designing and building a robotic prosthetic arm by early April, the holiday helped them overcome a major challenge.

“Our biggest obstacle right now is time,” says Laura Bennett, who’s working with fellow electrical engineering students Adam Parker and Sarah Lezarre on their capstone project. “We have eight months to work on this, but our schedule only gives us three hours of lab time each week.”

“If this was a full-time job, we’d be done by now,” says teammate Lezarre. “But we’re doing this on top of all of our other courses.”

That means the team has been putting in la lot of time after hours, learning to use 3-D prototyping software, writing progress reports and building an “arm” that will help amputees learn to use robotic prosthetics.

Capstone projects are major assignments engineering students take on during the final year of their studies. In the Department of Electrical and Computer Engineering, the assignments begin in September and end in the spring. Teams receive their assignments from “clients” (often from industry) who have real-world engineering problems to solve.

Bennett, Parker and Lezarre are building the arm for their “client” Patrick Pilarski, who earned his PhD in the Department of Electrical and Computer Engineering and now is a researcher in the Department of Computing Science. His team is focusing on artificial intelligence and machine learning in the development of “smart” prosthetics.

By the end of the project, the student team will present Pilarski with a working model of the arm. At the lab the team’s working in, an earlier model of the robotic arm, attached to a vest, is draped across the torso of a sewing dummy. Looking like a cyberpunk mash-up of auto-shop parts and servo motors, the arm-and-vest combo can be worn by researchers to see what it’s like to use the limb before asking amputees to test it.

“By building an arm that can be worn, you’re taking it one step closer to the experience an amputee would have using the arm,” says Parker, who has spent the past few summers working in Pilarski’s lab. “The experience is more realistic.”

Once these inventions are fine-tuned, the lab brings amputees in to test and critique them. Bennett says having the arm mounted to a vest saves time and money involved in those real-life tests.

The students are working in the Bionic Limbs for Improved Natural Control (BLINC) lab, where Pilarski is based. Various versions of robotic hands and arms are scattered among the different workstations in the lab, where groups of graduate students with electrical, computer and mechanical engineering backgrounds work with graduate students focusing on artificial intelligence and machine learning. These teams are supervised by Pilarski, along with mechanical engineering professor Jason Carey and a surgeon, Jacqueline Hebert, the lab’s director.

“By the time you’re in the fourth year of your undergraduate program you should be able to have a technical conversation with graduate students,” Parker says.

Parker and Lezarre are planning on pursuing advanced degrees after competing their undergraduate degrees; Bennett is eager to get into the workforce.

But first, of course, they need to get past their final term of studies.

And there’s no time like the present—even if it means working over the winter break—to get ahead of the game.