Annual tally records more than 100 bug species, including a warm-weather ant found for the first time in Canada. 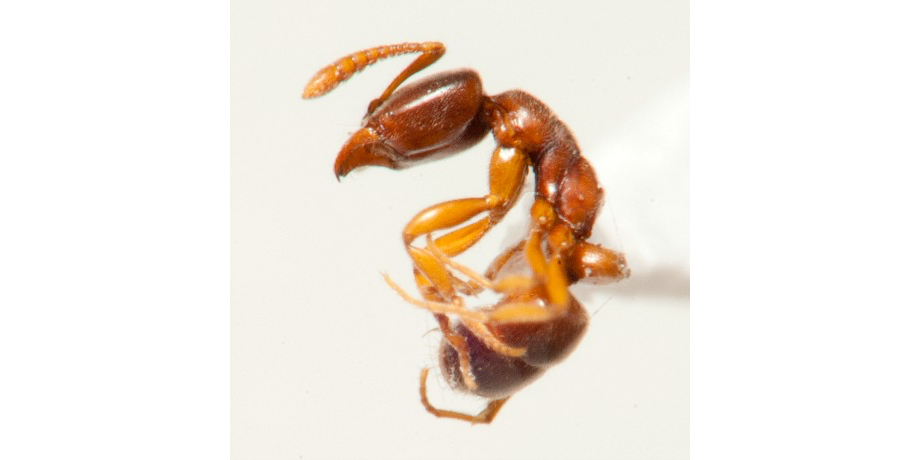 This ponerine ant was found in Westlock—the first time the species has been found in Canada.

(Edmonton) A type of ant that usually resides in warm climates was found for the first time in Canada, in an apartment in Westlock in the dead of winter.

It was one of 107 species recorded during the third annual Winterbugs Alberta, a winter bug count led by John Acorn, faculty service officer in the Faculty of Agricultural, Life and Environmental Sciences.

One of Acorn’s former students brought him the tiny, reddish ant specimen.

“I couldn’t ID it,” chuckles Acorn. “It was embarrassing because we had just published a key to the ants of Alberta. An ant specialist from the United States identified it—the ants have been showing up in Massachusetts, Poland and Germany. As far as we know, it’s not a pest.”

The count takes place from December to February when bug enthusiasts from across the province post their findings, which can range from flies, fleas and mites to beetles and even butterflies, on the project’s Facebook page.

The bugs, which can be found indoors or out, are counted if they’re active on their own and not roused from hibernation. If the exact species isn’t known, Acorn and other professionals will try to identify the bugs through photos or detailed descriptions.

This year, bugs were found in houses and greenhouses, in heated barns, on chickens, in basil from British Columbia, on a dead red squirrel, in a container of flour and even in the snow. Most are what Acorn calls “predictable household bugs,” like spiders and beetles. But he notes that the count was surprising in terms of what wasn’t found.

“When we started this, there was an assumption people would report the insects we know are active in the winter, like springtails, snow fleas and wingless crane flies. You can find them on the snow on warm days. But those have proved to be rare,” he said.

This year’s count yielded some other unexpected finds. A new species of cluster fly was spotted in Edmonton. The first count yielded a mite that also hadn’t been seen in Canada before, living in the bottom of Acorn’s pet scorpion’s cage.

This year’s count is still being compiled—some photos and notes were sent in just before the deadline—but Acorn hopes the count will only get bigger in the years to come.

“There’s a competitive urge to be the first person to report the first bug of the season and also be the one who finds the most.”