Summer internships give high schoolers a chance to work on advanced research in a UAlberta lab. 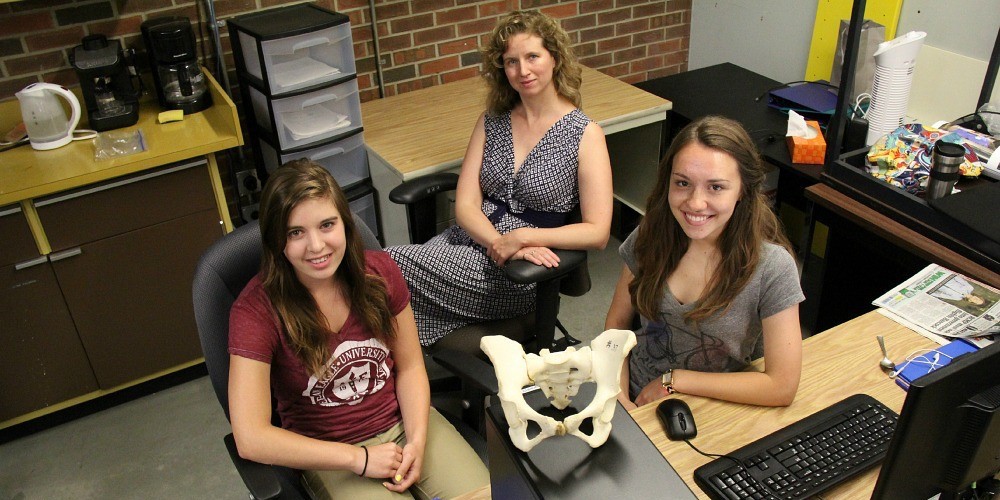 (Edmonton) Two high-school students are giving engineering a test drive, conducting biomedical research at the University of Alberta that could one day help surgeons determine how to treat patients suffering traumatic injuries.

Dana Andrishak and Natalia Rudolf are wrapping up six weeks of research in the Department of Mechanical Engineering, as participants in the WISEST (Women in Scholarship, Engineering, Science and Technology) summer internship program.

Working with mechanical engineering professor Kajsa Duke, Andrishak and Rudolf were charged with building accurate computer models of pelvises from CT scans of 14 patients, then determining a point at which surgeons would no longer be able to treat pelvic fractures (specifically, dual pubic rami fractures) with minimally invasive techniques. That is, they had to identify the level of severity at which treating the fractures would become more complicated.

Armed with this information, surgeons would be able to examine scans or X-rays of patients and know, before entering the operating room, what type of surgery would be required.

For the high-school students, both of whom are entering Grade 12 this fall, it was a chance to enter uncharted territory.

“I told them on the first day: ‘This is research. I can’t tell you how to do this. I don’t know how it’s going to end up—but I believe it is possible,’” said Duke.

“Yeah, we were going in a little blind,” said Rudolf.

“But this isn’t like high school, where someone has the answer for you,” said Andrishak, adding that she and Rudolf found working on the challenge “very rewarding.”

Both students were curious about engineering, and are happy that they’ve been given an opportunity to explore engineering and make a more informed choice about what they want to study in the future.

They also say it’s important that there are groups like WISEST, which opens doors for young women.

“Women can do just as much as men can, so I’m not sure why [engineering] is dominated by men,” Rudolf said, adding that groups like WISEST “are really important” in giving young women opportunities they might not otherwise have had.

For her part, Duke can’t recall any such organizations that were in existence when she was earning her engineering degree, but she was influenced by a high-school physics teacher whom she describes as a mentor.

Duke added that she participates as a WISEST mentor because it’s important to provide opportunities for young people—and because the WISEST students perform well.

“To be honest, they do good research,” Duke said. “I’ve found that if you give them a well-defined project, you’ll see good results.”

Andrishak and Rudolf are among a group of 12 students working in engineering research labs over the summer. Andrishak is being sponsored by the Society of Petroleum Engineers and Rudolf is sponsored by the Faculty of Engineering. In all, 40 high-school students (37 female and three male) from across Alberta are working this summer in labs across five U of A faculties through WISEST.