War crimes sentence should motivate early Canadian advocates of Bosnian Serbs’ cause to reconsider their positions. 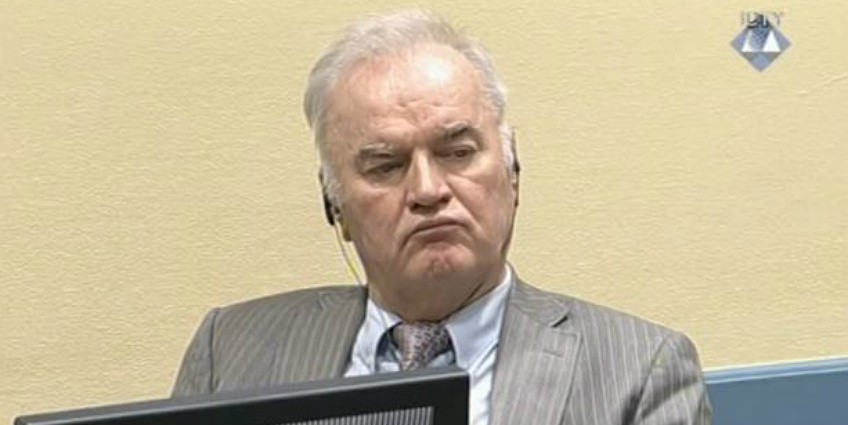 Ratko Mladic was sentenced to life in prison Nov. 22 for genocide, war crimes and crimes against humanity committed by units under his command during the war in Bosnia and Herzegovina in the early 1990s. (Photo: ICTY)

The International Criminal Tribunal for the former Yugoslavia in The Hague (ICTY) yesterday convicted the former military commander of the Bosnian Serbs, retired general Ratko Mladic, of genocide, war crimes, and crimes against humanity committed by units under his command during the war in Bosnia and Herzegovina in the early 1990s. He was sentenced to life in prison.

Known as “the butcher of Bosnia,” Mladic was responsible for laying a four-year bloody siege to the Bosnian capital, Sarajevo. Moreover, in the summer of 1995, in an act of genocide, he ordered the murder of some 8,000 men and boys from Srebrenica.

After spending 16 years on the run, Mladic was arrested in Serbia in May 2011. His arrest came after the tribunal saw a significant increase in trial activity under then-ICTY prosecutor Louise Arbour (a former Supreme Court of Canada justice), as numerous accused persons were brought to its custody.

Even though many Serbs see him as a warrior who defended his nation and his faith against the dark forces of Islam, Catholic Croats and predatory Western capitalists, this man will be forever remembered as the “butcher of Bosnia” who commanded over the genocide in Srebrenica.

The significance of his role in the Bosnian war could hardly be overstated. Mladic was an integral part of the joint criminal enterprise that lasted from October 1991 until Nov. 30, 1995. His was the role of an eager and brutal executioner. The objective was the permanent removal of Bosnian Muslims and Bosnian Croats from Bosnian Serb-claimed territory in Bosnia and Herzegovina.

The conviction rests on two fundamental points. One is the overwhelming evidence in support of the charges presented by the prosecution. Documents and directives issued personally by Mladic and the command structure of the Army of the Bosnian Serbs clearly point to the intent to commit genocide and constitute the most incriminating evidence against him. Testimonies of survivors add to this mountain of evidence.

The other is the fact that several of Mladic’s subordinates had already been found guilty of genocide and war crimes. His former deputies, generals Radislav Krstic and Zdravko Tolimir, as well as high-ranking officers of the VRS (Bosnian Serb Army), Ljubisa Beara, Vujadin Popovic, Milan Gvero, and Vinko Pandurevic, have all been serving or served lengthy prison terms. Moreover, during his trial, Gen. Krstic had accused Mladic and five other VRS officers of ordering the slaughter of civilians in Srebrenica.

I suspect that Mladic’s conviction and the overwhelming evidence of the intent to commit war crimes and genocide that accompanies it will dampen the enthusiasm of genocide-deniers among the Serb diaspora in Canada.

I also believe that it might motivate early advocates of the cause of the Bosnian Serbs, like the last Canadian ambassador to the former Yugoslavia, James Bissett, and the prominent military analyst Scott Taylor, to reconsider their previous positions. Moreover, this verdict should silence the critics of including the Srebrenica genocide exhibition in the Canadian Museum of Human Rights.

Mladic’s conviction, however, will not further the cause of reconciliation in Bosnia and the former Yugoslavia. This is, in part, because the ICTY was not designed to be an instrument of reconciliation. Ratko Mladic will remain a powerful force informing both the Serb national image and the sense of collective victimhood of the Bosnian Muslims and Croats.

I, nevertheless, hope that for the families of the countless victims of Mladic’s actions and the politics they represented, the guilty verdict provides at least some sense of closure and justice being done.

This article originally appeared Nov. 22 in The Hill Times.