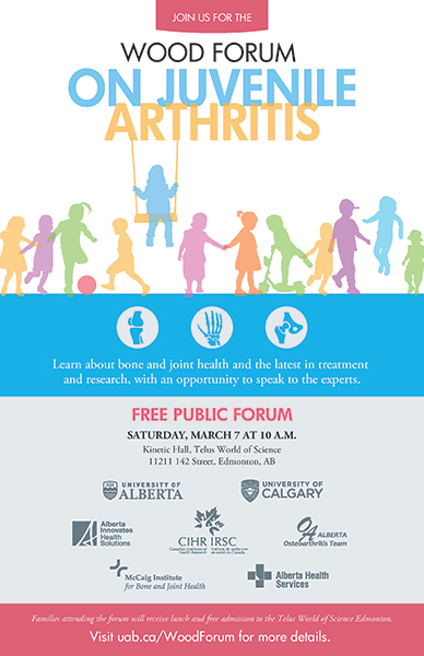 The Wood Forum on Juvenile Arthritis is a free public event at the Telus World of Science Edmonton on March 7.

Free public forum at Telus World of Science an opportunity for families to directly engage with health professionals about innovations in treatment and research.

Hosted by the Faculty of Rehabilitation Medicine, the Wood Forum on Juvenile Arthritis connects families affected by this disease with health experts.

(Edmonton) Maggie Ilcisin was just like any other three-year-old—overflowing with energy and exploring the world around her, including the ballet stage. But the budding ballerina seemed to avoid certain movements, such as flexing her toes and bending her feet. She also fell—a lot.

And then one day, while changing her daughter’s shirt, Lisa Hryniw noticed Maggie’s right arm was bent at almost a 90-degree angle and wouldn’t straighten.

“We made an appointment to see a pediatrician for that, but then a few days later I noticed her ankle was really swollen and hot,” remembers Hryniw.

Maggie was referred to a pediatric rheumatologist at the Stollery Children’s Hospital in Edmonton, and within a few hours they came out with a diagnosis and a binder full of information about juvenile arthritis

“I knew adults were affected by arthritis and I had an understanding that young adults probably got it at some point, but I never thought about kids getting it; nor did my husband. Now I think about it a lot,” says Hryniw.

Juvenile idiopathic arthritis, or JIA, is a disease characterized by chronic inflammation in one or more joints and affects one in 1,000 Canadian children—an estimate that probably understates its prevalence, says Janet Ellsworth, head of pediatric rheumatology at both the Stollery and the Department of Pediatrics at the University of Alberta.

Left unchecked, juvenile arthritis can lead to painful inflammation, joint damage and even deformity, and puts children at risk of developing uveitis, an eye condition that can result in blindness.

Juvenile arthritis affects just as many Canadian children as cancer, diabetes or inflammatory bowel disease, Ellsworth says, but often is under-recognized and under-diagnosed. For one thing, she says the disease varies in its progression and symptoms—not all patients complain of pain, something to which the Hryniws can attest—and the disease presents itself very differently in children compared with adults.

“A significant proportion of kids with arthritis have just a single joint that’s affected, or perhaps two joints, and many parents attribute symptoms to an injury. It takes them a long time to figure out that’s not what it is, when they see it’s not getting better. The same is true of physicians,” Ellsworth says.

Raising awareness about juvenile arthritis and bone and joint health in general is the aim of the upcoming Wood Forum on Juvenile Arthritis. Hosted by the U of A’s Faculty of Rehabilitation Medicine, the free public forum is an initiative of the McCaig Institute for Bone and Joint Health with support from the Wood Foundation and a Canadian Institutes of Health Research grant.

Organizer Linda Woodhouse, Chair in Musculoskeletal Clinical Research at the U of A, says the forum is meant to connect families affected by juvenile arthritis with pediatric rheumatologists such as Ellsworth and her Edmonton team, along with health professionals such as physical therapists and nurses and other families. Presented in a café scientifique style that involves the audience, topics not only highlight new treatment and research advances, but also offer the perspective of what it’s like to grow up with juvenile arthritis.

“Bringing all this expertise and real-life experience into the same room helps everyone—parents, families and even other clinicians—improve their understanding of juvenile arthritis and how it can affect a child’s health,” says Woodhouse, who is also scientific director of the Bone and Joint Health Strategic Clinical Network with Alberta Health Services. “The Wood Forum provides that bigger-picture view of where treatment is heading, but it also includes parents so they have an opportunity for one-on-one engagement about the issues that matter to them.”

Medication advances have seen Maggie move from painful weekly injections to treat her arthritis to oral medication that mostly keeps her symptoms in check. Now aged nine, she gets occasional pain and stiffness in her ankle, elbow or arm, but arthritis hasn’t held her back from enjoying activities such as gymnastics, karate or swimming.

“I love gymnastics so much. We do a lot of stuff,” beams Maggie, who never tires of turning flips, jumping on trampolines or into foam pits, and hanging from bars.

“She’s a really active kid. I always say to people, you’d never know by looking at her that she has arthritis,” adds Hryniw.

At the same time, Hyrniw has fully dedicated herself to learning more about the condition and raising awareness, even serving as chair of the Arthritis Society Alberta & NWT chapter’s advisory board. She says events like the Wood Forum raise much-needed awareness about the disease and she embraces the opportunity to learn about things like the long-term effects of medication, and to talk with other parents about their experiences.

“They’re not going to find a cure tomorrow, but it’s important to have the resources to find out ways for people to live better in the meantime so their condition does not deteriorate,” Hryniw says. “I want to know all I can about it—all I can learn now so we can plan for it.”

Register for the Wood Forum