Working towards better outcomes for patients with severe obesity

Mary Forhan and UAlberta colleagues to improve the quality of care of bariatric patients thanks to Alberta Innovates – Health Solutions PRIHS award. 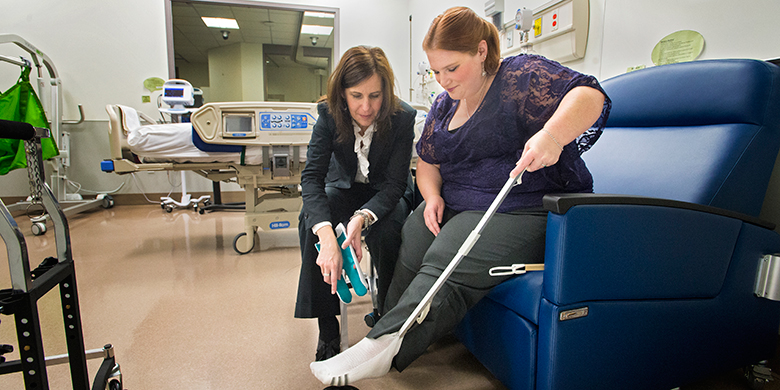 Bariatric researcher Mary Forhan (left), an assistant professor in the Department of Occupational Therapy, is working to improve the quality of life and care of patients such as Adrianna O’Regan, who underwent bariatric surgery in 2012. (Photo: Richard Siemens)

(Edmonton) Obesity researcher Mary Forhan has a vision of what the care of people with obesity should be like. Sadly, the reality is very different.

“Often standard hospital equipment including beds, stretchers, wheelchairs and exercise equipment don’t have the weight capacity to support patients with obesity,” said Forhan, an assistant professor of occupational therapy in the Faculty of Rehabilitation Medicine.

A prime example is Marty Enokson’s experience with bariatric surgery for his severe obesity in 2009. A second surgery, to correct a leak from his initial surgery, put Enokson in ICU for four days.

When moved to a four-person room, he weighed close 470 pounds. This meant he was not allowed to use the toilet in the bathroom: it was rated to 250 pounds. Instead, he had to use a commode in the room—even with three other patients and their family plus friends in the room.

It was “the most degrading experience of my life,” said Enokson.

The indignities didn’t stop there. As he recovered, Enokson made daily visits to the bariatric clinic in the hospital. Every day he was wheeled there on the portable commode because there was no bariatric wheelchair on site. Only after days of complaining Enokson was moved to a private room where he could use the commode in privacy. He wondered what would have happened if he did not have supplemental health insurance to cover the cost of a private room.

“The problems facing patients with severe obesity in hospitals have been on the radar of clinicians for quite some time,”

Enokson was in the hospital for three months and had no choice but to put up with this daily ordeal.

“Although the hospital was doing world-class bariatric surgery, they clearly weren’t prepared to deal with bariatric patients,” he said. “I walked out of the hospital without a shred of dignity intact.”

They found that many healthcare providers are apprehensive about working with this patient group because of lack of experience and training.

Adrianna O’Regan believes she is lucky to be alive after encountering a healthcare worker with a lack of experience and training. O’Regan had bariatric surgery in 2010. It seemed to go well; she felt fine and was able to go home three days after surgery.

But, she began vomiting almost as soon as she got home on Friday and all through the weekend. By Sunday night, she was convinced something was wrong and went to emergency.

“I explained to the triage nurse that I’d just had bariatric surgery. One would think the alarm bells would be ringing. Instead, she just looked at me and said I needed to lose weight. I wasn’t even examined by anyone.”

Still sick on Monday, O’Regan went to the Edmonton Adult Bariatric Specialty Clinic where it was determined her bowel was dangerously swollen. She had emergency surgery a few hours later and stayed in the hospital for three weeks.

“There are people, and this includes healthcare professionals, who think they have the right to judge you. People don’t know my weight loss journey but they make assumptions,” said O’Regan.

O'Regan believes Forhan and her team’s research is helping to change attitudes.

“It’s a huge challenge to get people to realize there’s more to obesity than ‘something you did to yourself,” said Forhan.

Early in 2015, the team began interviewing patients and healthcare workers at the Glenrose Rehabilitation Hospital. They needed a clear picture of the experience patients with severe obesity had in post-acute rehabilitation programs (such as recovery after a hip or knee joint replacement).

The team found that even though patients with severe obesity improved their function during rehabilitation, they were spending much longer in hospital.

Funded by an AIHS PRIHS award, Forhan and her co-principal investigators Jeffrey Johnson (School of Public Health) and Arya Sharma (Faculty of Medicine & Dentistry) will also collect data on the prevalence of obesity, length of stay and cost of care in adult cancer patients at the Cross Cancer Institute, cardiac surgery patients across Alberta, and children at the Glenrose Rehabilitation Hospital.   The Diabetes, Obesity and Nutrition Strategic Clinical Network are also on board to help determine the longer hospital stays.

One of the project’s goals includes developing best practice guidelines for providing quality care for rehabilitation patients who have obesity. The team will also survey healthcare providers about the gaps in training for the care of patients with obesity.

Forhan and Sharma run the only bariatric certification workshop in Canada.

Staff from the University of Alberta and the Canadian Obesity Network co-host the workshop. To date, they have trained almost 90 health care professionals across the country.

“The big issue that motivates our team to do this research is that we’re really tired of patients with obesity being held solely accountable for health care costs associated with obesity,” said Forhan.

“It’s not all about weight. They include the equipment in our hospitals, training of professionals, and attitudes toward obesity. We’re going to identify those factors and recommend targeted strategies to address them,” said Forhan.

She has found that there is a lot of fear that if we accommodate people with severe obesity the patients won’t want to change.

“That’s ridiculous when you think about it but we hear this opinion frequently. It’s actually the opposite of what we expect will happen. If we can treat patients well, safely, and with respect and if there is appropriate equipment in the hospital to accommodate their body weight, we’ll move them through the health system quicker and into the community,” said Forhan.

She believes these steps will allow them to engage and participate in all those healthy and everyday activities that promote independence, health and well-being.

“We could even prevent the development of severe obesity if we just had a more accessible system. People would get more preventative care instead of only showing up when they’re quite ill.”

O’Regan and Enokson now volunteer a considerable amount of time to advocacy work for the Canadian Obesity Network.

“The research done here in Alberta is extraordinary. They’re going to change the world,” said Enokson. “Weight bias is so prevalent. Weight is one of the only things left that is still socially acceptable to make fun of.”

“You wouldn’t think that’s too much to ask. My goal is to help change attitudes. If it’s one person at a time, so be it.”

Working towards better outcomes for patients with severe obesity