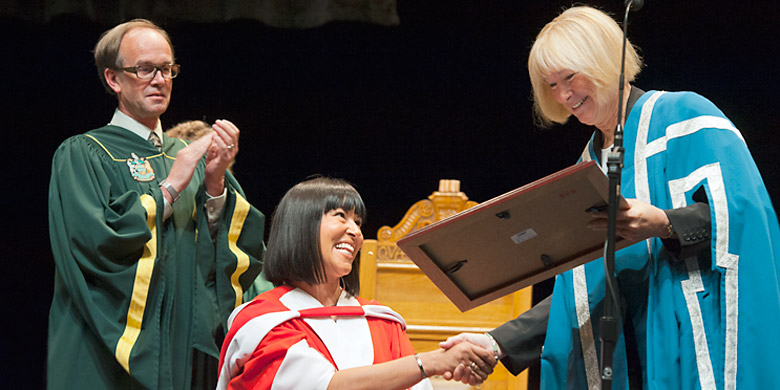 (Edmonton) In 1992, Chantal Petitclerc stuffed her school books and her dreams into “a beat-up Reliant K Chrysler” to drive across Canada from Montreal to the University of Alberta’s Lister Hall, where her inspiration to become a leading athlete and citizen was born.

Accepting an honorary doctor of laws degree June 5, Petitclerc said the event was made “special and emotional” by her memories of the U of A. Though she only studied for three years at Campus Saint-Jean before launching a luminous, gold-medal Paralympic career in wheelchair racing, Petitclerc said the U of A provided her with the passion and the skills to succeed.

“Here I am 20 years later and I do have Paralympic medals and world records … but when I do think back, it makes me realize that sports is like any other goal we have in life. No one ever starts on the highest steps of the podium—we all need to start at the beginning and fight our way up, step by step. My Paralympic adventure started at the U of A, like it is for you,” she told students graduating from Campus Saint-Jean and the University of Alberta School of Business.

Petitclerc knows about overcoming adversity. She was just 13 years old when a barn door fell on her, costing her the use of her legs. “The way I felt at the time was that everything was thrown out of control. I learned that we don’t always choose what will happen to us, but we always choose how we are going to react to it.”

After her high-school gym teacher advised her to build her physical stamina by swimming, Petitclerc discovered a passion for sports, and never looked back.

Within a few years, she broke into the competitive world of wheelchair racing, which launched a long and highly successful career that included stops at the 1992 Summer Olympic Games in Barcelona and the Beijing Games in 2008.

Her career includes competition in five Paralympic Games in total, and she holds five Games records and five world records in her sport. To top it off, she holds the distinction of being the only Canadian athlete to have won gold medals at the Olympics, Paralympics and Commonwealth Games. She has taken home 21 Paralympic medals, 14 of them gold.

In addition, Petitclerc serves as an ambassador for the international Right to Play organization, was given the Lou Marsh Trophy as Canadian Athlete of the Year and was named Canada’s Female Athlete of the Year in 2008. In 2009 she was named a companion of the Order of Canada for her achievements as a Paralympics champion and for her advocacy for athletes with disabilities.

Among her many awards, she has also received a star on Canada’s Walk of Fame and, in 2010, received the United States Sports Academy’s Juan Antonio Samaranch IOC Disabled Athlete Award.

Petitclerc credits her time at the U of A for teaching her how to attain her dream of a career in wheelchair sports.

“It is where I learned to be curious for everything, to set goals, and to have an open and critical mind. The U of A is a very big part of who I am, and who I am is what allowed me to become the best athlete and person I could become.”

Petitclerc urged the graduates of 2012 to stay positive in the face of change.

“We can all be certain that no matter who we are and what we choose to do, we all will be facing many challenges. How you choose to face those challenges is really what makes a huge difference in the success you will have in the end.”

She also encouraged her audience to follow their dreams, recalling how she was greeted with doubt after telling family and friends that she wanted to make a career of wheelchair racing.

“I went for it because it was my passion and it’s been an amazing journey. Follow your heart, follow your passions and then everything is possible.”

And despite her many medals and accolades, Petitclerc reminded the new graduates of something more precious.

“The most important victory is to wake up every morning and be happy with the life we have. I know you are all setting very ambitious goals and you will make them happen, but I also want you to trust your passion and be who you want to be, to not be afraid to take risks, to try to make a difference around you and be the best you can be. But never forget, make sure you have some fun doing it.”