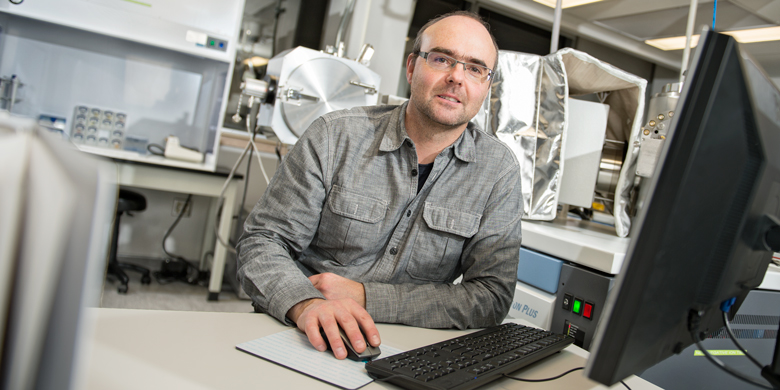 (Edmonton) A University of Alberta researcher will continue to open up new frontiers in diamond research in Canada’s Arctic with one of the largest and best-equipped labs in the world.

Graham Pearson, Canada Excellence Research Chair in Arctic Resources at the U of A, officially opened the Arctic Resources Geochemistry Laboratory on Nov. 27. The facility will help spur the development of new methods for dating diamonds, advance our understanding of diamond deposits deep underground, and aid scientists and industry in determining which deposits are economically viable.

“Diamond exploration is a very time-consuming and expensive undertaking,” Pearson said of the $2-billion-a-year industry. “It’s very much like looking for a needle in the haystack. If you can get rid of as much of the haystack as much as possible, then it leads to much more rapid narrowing down of good deposits to focus on. That’s our aim: to develop new methodologies to help narrow that search down.”

The lab, part of the Canadian Centre for Isotopic Microsampling, is the largest of its kind in Canada and among the two or three best-equipped labs in the world. It includes 2,200 sq. ft. of ultra-clean work space, plus an adjacent 1,300-sq.-ft. facility that houses six mass spectrometers and laser sampling systems, used to measure ultra-trace elements in “indicator” minerals to create a fingerprint that can determine the diamond grade, or richness of a deposit. Scientists are also able to determine the age of potential deposits and host diamonds, and to identify from where in the world specific diamonds may originate, to trace illegal trade.

The work requires an ultra-clean environment to prevent trace-metal sample contamination, meaning rooms are free of metal finishes or furniture and feature fibreglass doors, walls and anti-static floors. The lab contains a sophisticated air-handling system capable of taking air that has roughly 10,000,000 particles per cubic foot and purifying it to zero.

The Arctic Resources Geochemistry Laboratory received $10 million from the Canada Excellence Research Chairs program, created in 2010 to attract and retain the world’s best and brightest scientific talent to Canada, with additional funds from the U of A, the Canada Foundation for Innovation, and Alberta Enterprise and Advanced Education.

"Our government recognizes the importance of supporting world-class researchers who are leading in areas of strategic importance to Canada and who are contributing to building Canada's wealth of knowledge," said Hon. Greg Rickford, minister of state for science and technology. "Canada Excellence Research Chairholders are some of the world’s leading academics and most-accomplished experts, and their work in our universities will strengthen Canada’s research capacity while also creating jobs and positioning Canada to be on the cutting edge of innovation."

Pearson, a professor of geochemistry, came to the U of A from Durham University in the United Kingdom, after being credited with pioneering the first technique for dating individual diamonds.

“The U of A, and in particular the Department of Earth and Atmospheric Sciences and Faculty of Science, has been an extremely supportive research environment,” said Pearson, also noting the support of colleagues—leaders in diamond-related research who were a key factor in his coming to the U of A.

“Having a really strong nucleus of colleagues that are interested in similar problems is a great thing to have as a researcher.”

An extremely complex facility to build and commission, the Arctic Resources Geochemistry Laboratory has opened in stages since last spring. In that short time it has proved an international hub of collaboration for Pearson’s team and colleagues at the U of A, with interest from other places in Canada, the United States, Europe and New Zealand.

“There is considerable international collaboration and interest in this facility. Visitors from around the world are using this lab or sending samples here,” Pearson said.